Alberta and the Climate Change Deniers 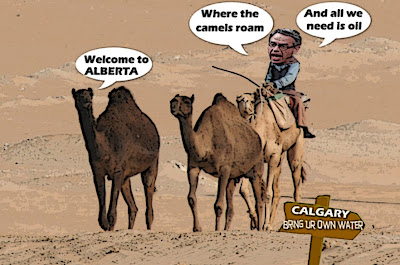 Well now we know what climate change could do to Alberta.

At a minimum, temperatures in Alberta are expected to increase by 2 C over the next hundred years; all available global climate models predict this outcome. In response, Alberta's ecosystems are projected to shift northward: for example, the parkland landscape around Edmonton will come to resemble the grassland landscape around Calgary.

At the upper end, under a high global greenhouse gas emissions scenario, the climate models predict drier conditions and temperature increases of up to 6.5 C, which could result in the near-complete loss of the boreal forest from northern Alberta. The boreal region currently covers more than half of the province.

The question I have is what will people think of climate change deniers like Joe Oliver and Stephen Harper who helped lead them to such an arid future?

Will they call the next big flood The Big Olly, or the wildfires that can't be put out the Big Steve or the Killer Klein?

Like some in the U.S. are trying to do, by naming hurricanes after their climate change deniers...

What I do know is that as the world gets hotter, the climate change deniers who crippled all efforts to fight the problem, are going to feel the heat even more than the rest of us.

For we will never forget. We have all their names. We will find out who paid them to lie.

And we will not forgive...

.. let me enlighten you Simon.. and thanks for your unswerving recognition of Canada.. the land that only glowing Canadian hearts can recognize..

The legacies that seek their makers.. the prissy Stephen Harper and ridiculous Bay Street stockbroker Joe Oliver .. are transparently clear and defined. These are shrill opportunist carpet baggers.. one from Toronto and one from Montreal.

The snake oil they are pimping is from the tar sands and via fracking.. and to get back to their well deserved but disastrous legacy.. ... its poisoned waters, electoral fraud, hollowed out economies, poisoned species, parliament prorogued, attacks on First Nations treaties, Senate Scandal, gutting of environmental law.. and secret dealing with China re trade, military cooperation and who knows what else..

Legacy is a two way street.. you need to look both ways ..
even if you are a manipulative cretin ..
and I'm afraid, Stephen Harper forgot that basic rule..
and Joe Oliver is an astounding quisling traitor .. circus barker

hi salamander...thanks for your comment, as eloquent as always. The way I see it the Con klowns and all the other members of the vast climate change denial conspiracy, are getting off far too lightly. But it's too late to duck or hide, they have threatened the very survival of the planet. Their is no more serious crime. And if it's the last thing I do I will work with others to make sure that justice is done...

.. Thanks Simon .. Its important that pathetic sociopathic political animals get the legacy they deserve..
I hope the Harper - Baird - Kent - Flaherty - Ashfield - Clement - Oliver attacks on Canada can be stopped..
Certainly I hope we describe their 'legacy' as 'they tried to destroy' .. rather than .. 'they jointly destroyed' ..

But for now, we have to recognize just how pathologically dangerous
this coalition of ruthless evangilical idiots is to Canada and Canadians

Thus we have to portray how disastrous a legacy.. is underway .. Here's a brief frightening look into the future ..

Stephen Harper - Obscure but persistent self acclaimed 'westerner' economist, that grew up in Toronto.
Rose to limited political prominence via extreme right wing white supremacist party involvements
Parlayed secret deals with existing Progressive Conservative into a minority government 'brand'
Rode massive electoral fraud to a majority government in 2011 and used omnibus legislation
to begin gutting all environmental legislation in favor of unrestricted tar sands, fracking and pipeline development.
Ensured that much of the boreal forest and integral ecosystems, species etc were destroyed via 'energy policies'
Secretly bound Canada into trade and military and investment treaties with Communist China
Utilized litigation, obstruction, prorogation and massive propaganda to distort & hide undemocratic goals
Ensured that west coast ecosystems and species were wiped out in favor of LNG, fracking and tar sand exports to China
Ensured arctic ecosystem and polar bears followed the extermination of wild salmon, orca, eagles, bears
Withdrew suddenly from politics in 2014 to spend more time with his family.. and Ray Novak ..

the climate change deniers, currently making up the slimers will be off somwhere in a gated community, which is climate controlled, like the West Edmonton Mall. Stevie slime and his slimers will have made their money and will move on. They won't care when Canada starts to have wild fires as they are currently experiencing in California and we had in Kelowna, B.C., 10 yrs ago. If you are rich enough, you just move. Its the rest who have to stay.

Regardless of whether you believe the climate is changing due to human made conditions or not, the climate is changing. It has changed over the hundred of millions of years. An ice age can come on in 10 yrs. So can a warming. We need to be ready for the climate change. That entails ensuring we do not build in eco sensitive areas. That we don't pollute the water, because we may not have much left, etc. As a min. society needs to acknolwedge climate change is happening and so is industrial pollution. We can't pollute the earth and expect it to sustain us at the current rate. Toss in a few wars and there is real trouble. One of the last clean places on earth was Canada. Now not so much thanks to stevie, his slimers, and those who voted for him.

Wow, that was deep salamander, just calling them a bunch of names. Is that all you got? Lol!

And I will fight you to my final breath.

" Now not so much thanks to stevie, his slimers, and those who voted for him."

Um that just might be your mom. You know, the one in whose house you still live.