Stephen Harper: When the Monster Shows His Stripes 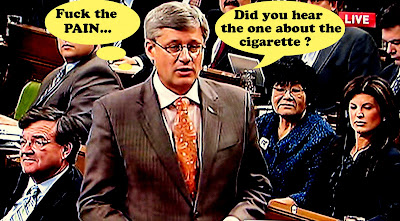 There's at least one good thing about Stephen Harper. Every now and then he just can't help showing us what kind of cloth he is cut from. And it's not pretty.

Michael Ignatieff asks a serious question about a problem that is causing a lot of suffering in Canada.

And this is the best Harper could come up with...

“I wish the Liberal Party would actually get its messages right,” he lamented, holding in his hand a copy of the opposition’s policy pamphlet. “I look at this brochure where on page six the Liberals talk about health care and on page four they promote somebody smoking.”

Can you believe that ? A cheap shot about a cigarette... in a picture? When we're talking about cancer, a problem that causes untold misery, and a plan that could help seniors live at home in dignity.

Instead of ending up in some ghastly institution, alone and lonely in their soiled diapers.

Oh boy. You know Don Martin suggests that Stephen Harper might want to change his monster act if he wants a majority.

But only provides more evidence that he can't.

(For the record, the only time I’ve aggressively sought official comment from Mr. Harper was following the death of Calgary Herald reporter Michelle Lang in Kandahar. My request was rejected, a spokesman told me, because it would set a precedent for Mr. Harper to comment every time a reporter was killed. Now THAT’S mean-spirited.)

Because it's not in his nature. He just can't feel the pain of  others.

What distinguishes all of these people from the rest of us is an utterly empty hole in the psyche, where there should be the most evolved of all humanizing functions.

Sound familiar? I thought so.

A man who can turn a question about cancer into a joke is a monster without a heart. And unfit to be Prime Minister.

So can the monster find his heart?

But that's another story.... 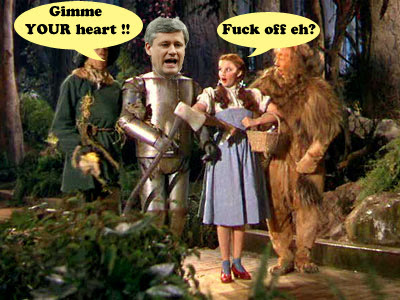 There is a name for Harper's condition. It's called Anti-Social Personality Disorder. Look it up and you'll see that the diagnosis fits. Sometimes I feel sorry for the guy. It must suck to be him.

I looked it up as well and it fits him to a tee. I hope this pasted article isn't too long and I beleive I will use it often. keep up the great posts Simon.

The criteria for this disorder require an ongoing disregard for the rights of others, since the age of 15 years. Some examples of this disregard are reckless disregard for the safety of themselves or others, failure to conform to social norms with respect to lawful behaviors, deceitfulness such as repeated lying or deceit for personal profit or pleasure, and lack of remorse for actions that hurt other people in any way. Additionally, they must have evidenced a Conduct Disorder before the age of 15 years, and must be at least 18 years old to receive this diagnosis.

People with this disorder appear to be charming at times, and make relationships, but to them, these are relationships in name only. They are ended whenever necessary or when it suits them, and the relationships are without depth or meaning, including marriages. They seem to have an innate ability to find the weakness in people, and are ready to use these weaknesses to their own ends through deceit, manipulation, or intimidation, and gain pleasure from doing so.

They appear to be incapable of any true emotions, from love to shame to guilt. They are quick to anger, but just as quick to let it go, without holding grudges. No matter what emotion they state they have, it has no bearing on their future actions or attitudes.

The rarely are able to have jobs that last for any length of time, as they become easily bored, instead needing constant change. They live for the moment, forgetting the past, and not planning the future, not thinking ahead what consequences their actions will have. They want immediate rewards and gratification.

The cigarette thing is a derailing tactic befitting an internet troll, not the PM. Really, WTF?

hi Winnipeg Dad... Yikes. I did look it up and you are right, it does fit him. And I also know why you sometimes feel sorry for Harper, because believe it or not sometimes I do too. You are what you are, and he can't help himself. But he's doing so much damage he just has to go...

hi Marie...thanks for that info. Now I'm going to have to keep the lights on at night. ;)
Seriously though,I'm not trying to insult him by calling him a psychopath, because he can't help himself, and it's a pretty common condition. But I can think of nothing else to explain his cruel behaviour, and his indifference to the suffering of others. I just wish the MSM could take a closer look at his personality traits, but I guess that's hoping for too much...

hi Marissa...I think you hit the nail on the head. I've become numbed to what the Cons have made of question period. But that remark stunned me, especially since the plight of seniors, and their caregivers, bothers me so much. But I'm hopeful that more and more Canadians are starting to take note. I have a friend named Angus, who is a really sweet guy, but the most non-political person EVAH. But he was sort of watching QP with me the other day and he suddenly shook his head and said "They never answer the questions do they?" So trust me, that means there is hope for this country... :)