Seth Walsh and the Homophobic Bullies 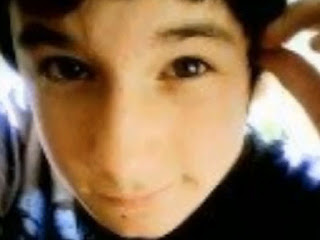 When I read the story of Seth Walsh and how he was bullied to death, I felt like I had been kicked in the stomach.

My first thought was how could anybody bully such a gentle child?

He was a gentle child, they say, who preferred to "relocate bugs" rather than kill them, who made sure his younger brother got his share of Easter eggs and who once apologized to a bed of flowers when he picked one and placed it on the grave of the family dog.

"I had no idea there was that much pain inside of him. He was a sweet kid who found the world cruel ...but he didn't understand cruelty."

Then I wondered how many kids like Seth Walsh are there in Canada ? Where bullying is a huge problem.

A kid is bullied every 20 seconds in Canada. Every day in the U.S., an estimated 20,000 students don’t go to school because they are afraid.

And not enough is being done to fight it.

Then I got angry. My head started pounding, my face turned red, and I had to go down to the basement and kick the old punching bag, and pretend I was fighting the bullies again.

Because only two things got me through high school. My ability to run faster than my enemies, martial arts, and my blind hatred for bullies.

So the last thing I needed to do was read this headline.

I have a hard time believing that if these kids had been bullied for their race, not for their sexual identities, that the adults tasked to protect them would not have reacted differently, or at the very least would have reacted at all.

But you know what? She's right. Bullying is an adult problem. A societal problem. If you don't nip it in the bud, one day it could crawl in through your  window.

In a study of more than 500 children, University of Michigan researchers discovered that children who were viewed as the most aggressive by their peers at age eight grew up to commit increasingly more serious crimes as adults. Other studies indicate that, as adults, bullies are far more likely to abuse their spouses and children.

And anti-gay bullying is a direct product of homophobia, that still spreads like syphilis, even in a place like Canada. Thanks to people like the Harper Cons and their rabid Christianist base.

Then when my anger subsided, I was just glad I attended this vigil. 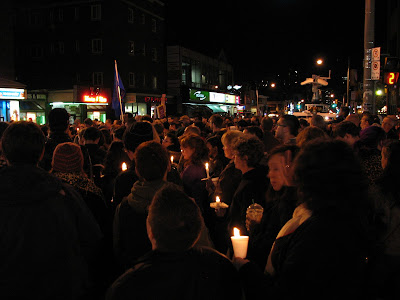 Glad that they read Seth Walsh's name out, in that sea of candles, so that gentle child won't be forgotten.

Glad that we sent out the message to other suffering kids that it does get better.

And of course glad that I got to belt out my favourite message...in a country where too many adults don't care enough. And bullying is a non-story.

Wake up your humanity you LOSERS.

End the silence about homophobic violence...

Hi Simon,
What a horrible story. The poor little fellow. I relocate bugs daily, pick up worms and slugs on the sidewalk. Move spiders to more advantageous locations(for them..I hope).

I believe this really started when Bush gave his "you're either with us or you're with the terrorists" speech. I remember the moment that I heard that line from his filthy mouth, he was giving all of the thugs and bullies tacit permission to start singling out the other.

Its spread all over the world now and its just like a virus. The US has such a thin veneer of civility in their society and perhaps we are the same, at least in some places. With economic hard times that are going to only get worse as we move forward that civility is peeling away and peoples true characters are going to show more and more.

I go to blogs and write comments and then read them and then delete them. I get so angry that I can't write coherently. You express anger and you do it is a way that leaves me feeling at home here. Canadians are so passive, they need to wake up and get angry.

Two more stories that I read this evening involved more bullying including 4 students who had killed themselves at a school in Ohio over a 2 year period.

In the second one the two adults involved started backpedaling the next day as they started to feel the heat. Why did they feel that they could trumpet what they were doing with impunity? Disgusting.

Harper and his theocratic thugs are trying their best to catch Canada up to the US.

Hi Stewart...yes it was a sad story. I can't stand seeing gentle people brutalized. And yes I can relate to him I'm a re locater too. Although I leave the spiders to Sebastien...
But yes the U.S. is reaping the hate it has sown. And how I wish that we weren't such a passive people. As for anger...it was once my greatest enemy, but now I am trying to harness it for good purposes. I'm reworking my bully story, and when you see it, you'll know what I mean. My life is so much better now, and I'm so so happy to see bullying get more attention in the U.S. media than it ever has. But it does awaken really bad memories so it still isn't easy...