A Con Zombie Gets an Honorary Degree 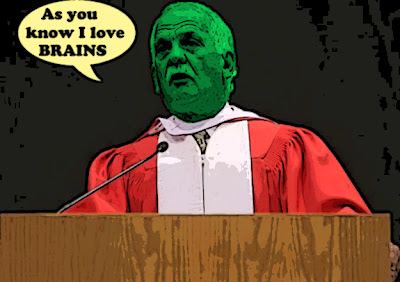 Uh oh. I see the Con zombie Vic Toews has staggered out of his crypt and received an honorary degree at the University of Winnipeg.

But not without some resistance from the living.

"The decision to give an honorary doctorate to someone who is best known among my generation of students as a vocal opponent of the expansion to human rights is questionable at best," said Larson, who earned an honours degree in psychology.

And look you can watch the voodoo ceremony magic moment  here !!

So why would a university award an honorary law degree to a Con zombie who once claimed that protecting gays and lesbians from hate crimes would "bring the jackboot of fascism down on the necks of our people? "

A theocratic fascist who wants to jail even more young people, and a creepy old hypocrite.

You know they say that the old white men in Alberta and the prairie provinces are ruining this country.

But as I'm sure you also know.

I think the problem is even more serious...

The young will save this zombied out and corrupted country.

Here's to the Con Apocalypse.

Montreal Simon, ... I wonder how you can stand it sometimes.

I was never bullied (at any great length, y'know, aside from the usual childhood experiences), I'm a white, male, heterosexual. But I'm a leftist, and I can't stand the stupidity and hypocrisy that the system presents, on an intellectual level. It offends me that some people think that any atrocities on our side are excusable, but any violence on the others' side is unmitigated evil.

Such intellectual inconsistency offends me.

But you have to live in a world where hateful fucks like this Toews turd get honorary degrees despite building careers on treating people like yourself like shit.

I salute you brother and I wish you strength.

(I'm drunk, so forgive me if I've come across as maudlin.)

Bravo, Simon! And BRAVA, ERIN!! And Boo dr.franketoews! Did you notice that other than the Wpg Free Press & the Wpg. Sun, there was no MSM coverage of the issue, the protest, & Erin's amazing speech! (At least none that I saw, & I did look - unless something came out later.) No coverage of the people's objection to this nonsensical act of the U of M to a Minister who is against human rights! (Except for old white straight ConMen). I was also appalled at Lloyd Axworthy's comments damning Erin for speaking out at the convocation. Axworthy is supposed to be a Liberal(remember liberals?) AND both a constitutional expert as well as a Human Rights expert! But I guess he's an old white powerful straight guy now, so he doesn't have to bother anymore! Disgusting!

hi thwap...thank you what a sweet comment. You should get drunk more often. :)
Seriously though...although I was bullied I did fight back so the experience only made me stronger. And since I've been bad mouthing the bigots and the bullies for so long, anything they say is like water off a duck's back. I do care about the damage they can do to others, whether they are children or seniors, but they can't hurt me. And since I try to have a little fun at their expense, I quite enjoy it.
Also, I have to say that I have a very strong gay guy as a companion, and if I ever get into trouble he's always there to save me, and make sure that I'm not too much of a fool ;)
So thanks again for your comment, and I wish you strength too. We will defeat those horrid Cons sooner or later, and won't that be a beautiful day?

hi CanNurse...thanks a lot and yay Erin !! She was great and so were those other kids. I love them all.
I must say I'm very disappointed the University of Winnipeg would give the theocratic bigot Toews an award because his record on human rights is appalling. But as I pointed out I'm afraid money talks. As for Lloyd Axworthy I must say I thought his comments were ridiculous. Erin and the others behaved extremely well, and she had every right to say what she did. I'm afraid like John Manley, Lloyd is mutating into another Liberal in name only. As for the MSM...I expect so little from them these days, so I'm never disappointed.
Thanks again for your comment...