When a Fordzilla Attacks Toronto 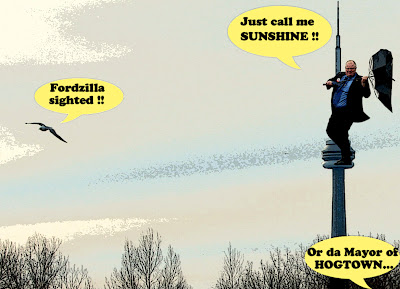 Gawd. Living in Toronto isn't easy eh? First we had the G20 to show us how it feels to live in a police state. Nasty. And now we're under attack by a humungous Fordzilla.

A crass right-wing bigot bully who could be the city's next mayor.

And here's the problem. Like many other lefty types I'd like to vote for Joe Pantalone. But unless his supporters switch their votes to George Smitherman, Ford will probably win.

Mayor Joe isn’t going to happen. He’s lost. A vote for him is a statement of principle they could make much more eloquently — and risk-free — with a blog, a Tweet or a letter to the editor explaining why they voted for their second choice.

So I'm with Jonathan Goldsbie:

“I am not a fan of strategic voting,” he wrote, “but neither am I a fan of regret and ridicule; I want to be able to live with myself for the next four years.”

And with Alice Klein

Democracy is not soul food. Elections are not some romantic ideal designed to inspire potential voters. They are duke-outs for the reins of real power. They absolutely have consequences that affect us all, and they demand a healthy, critical rationality.

God save us from the electoral idealists who want you to "vote with your heart." Time after time, they are the right-wing’s secret weapon.

Because it's so true. Progressives need to get real. Stop picking the lint out of their navels, while the bad guys win.

Smitherman is a bit too right-wing for me. And I'm sorry Pantalone is not more popular. But anyone who thinks Smitherman is as bad as Ford is either a Con or an IDIOT.

And surely we can all agree.

That ANYTHING is better than this...

Yup. Sharpen your pencils everyone.

The alarm bells are ringing. Progressives need to get real.

And the Fordzilla must be DEFEATED...
Posted by Simon at 11:12 PM

A very realistic post. I particularly like the Alice Klein quote. I think she's bang on. Goldsbie, Klein, and now you, have explained the unpleasant realities that I'm afraid many don't wish to face and that more times than not, voting is about picking the lesser of the evils rather than seeking that pipe dream of greatness.

I remembered on some post I did a long time ago about Iggy (I've done so many!), a commenter had asked me; no practically was panicing (paraphrased): don't tell me you've sold your soul just to make sure Harper doesn't get a majority. I think my membership in Catch 22 Conservatives, which does advocate strategic voting for the next federal election and the few posters I produced for them pretty much confirmed his fear. And yes, I told him that 'damn straight!' I was definitely one of those, I want Harper out of office, or at the very least, prevent him from getting his precious majority, and I don't really care how it's done. And that's true; I don't!

As for Ford, I read some prog blogs who had a problem with a Smitherman tweet that basically said a vote for Pantalone was a vote for Ford. I felt like asking some of them what exactly was it about the tweet that had angered them? The fact that they may not have a choice but to abandon their favourite candidate? The fact that Smitherman was actually telling the truth and this is a case of the truth hurts?

They shouldn't kid themselves, I think Ford will implement everything he wants to do. Remember that "gravy train" and "waste" and other such buzz words? Why do I get the feeling that "waste" means the entire city of Toronto, and that "gravy train" means eliminating city councillors and turning it into a one man show?

And how the Ford team succeeded in convincing the voters of Toronto that David Miller ruined their city. There's just no undoing that kind of damage. Remember, the power of misinformation is helluvalot stronger than the power of the truth.

My parents would have voted Pantalone and he was their favourite, but, they will be voting for Smitherman; they remember how Ford as a councillor voted or trie d to eliminate snow & ice removal. As mayor, I imagine he would do just that. This would render them shut-ins. As my dad needs to go to the hospital/doctors a minimum of 3 times a week, this is not an option.

hi ck...I like Alice Klein a lot, and that column of hers is so good I'm going to have to find and excuse to repeat it over and over again. Politics in these dangerous times is not about making you feel good, it's about seizing power and using it to bludgeon your enemies.
As I said Smitherman is not my best choice for mayor, but he's better than Ford, just like Ignatieff is better than Harper.
Anyone who doesn't understand that is just crazy as far as I'm concerned. When I see how some lefties parse ideology they remind me of crazy camel herders chewing over every word in the Old Testament. Canada is politically speaking a deeply dysfunctional country. Unless we can get a grip on reality all kinds of terrible things are going to happen. But since we also have the tendency to deny reality, until those terrible things a happen I'm not optimistic that we are going to do the right thing....