Rob Ford's Toronto is NOT My Toronto

From where I live, on a late fall afternoon, the city of Toronto looks pretty damn beautiful.

But of course, what I'm looking at is the REAL Toronto, not the Frankencity the Con thug Mike Harris, and his little stool tool Jim Flaherty created.

You think maybe there’s a cultural divide going on here? It’s no surprise that Ford’s support was concentrated outside the boundaries of the original city of Toronto, but the starkness of the division is startling to see. In essence, Toronto is two cities that don’t like one another much but have been forced to cohabitate. And who performed the ceremony? Yes, Mike Harris.

Gosh. Big Hog Mike as Rob Ford's porky daddy. Isn't that a scary thought? You add up both of their IQs and you still get dumb bully or thug buffoon.

You know as I said the other night, I'm a Montrealer eh? So I could look at that map and the pink zone where I live, and think OMG what have I done? Who knew I'd end up playing Davy Crockett at the Alamo? Gimme a train ticket quick !!!!

But actually, it only makes me proud to live here. A city where white, black, brown, straight, gay, young and old, rich and poor, or whatever live happily together. And Cons are DEFINITELY not welcome.

You know every progressive in Canada should be proud of the REAL Toronto, the  bastion of real Canadian values. The little but mighty fortress that Stephen Harper will NEVER conquer. And the Pig Man will NEVER rule. 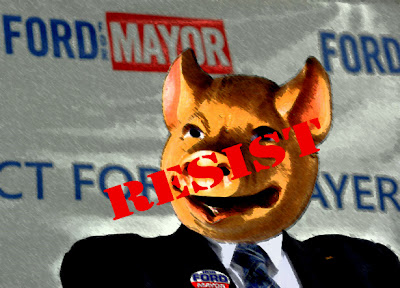 But look, if I'm going to play Davy Crockett at the Alamo we're going to have to change the ending eh? In my version WE win, and the porker ends up as bacon, next to the Harper ham. Or just another loser.

The small crowd at Esther Shiner Stadium proved they were up on their current events.

In the meantime, on a late fall afternoon, looking across at the REAL Toronto all I can say is this...

Hey beautiful... it's me... Simon.... from Montreal. Look I don't know how I ended up living in a fortress under siege.

But I'm REALLY glad I'm here to help defend you. The Cons will not pass.

Now all I need to know is if we can't win back the angry teabaggers in the suburbs.

OMG you live on the island? Beautiful. The view of Toronto from where I live is the side of a building, lol.

One thing that Ford was really missing was a sense of the spirit and idea of Toronto - diversity and culture etc. - our aspirational image of ourselves.

To be fair, rob ford accepts the votes of everyone, queers and darkies alike. Just don't start whining to him about the consequences of your "lifestyle choices" or any bullshit about "racism" or "discrimination."

Because Rob Ford CHOOSES to suppress his bisexuality (otherwise, there's no choice, nest-pas?) and he doesn't hate non-white people. (He might not associate with them or want to hire them or anything, but so what?)

And lots of non-white people did vote for Ford. People who "work hard." Because they "work hard" (supposedly) I have to forgive them for having their heads up their asses.

I agree with your overall point, but I just don't like the rhetoric of "real" Toronto. Defining some people as "real" Canadians, and hence others as "not real" Canadians, is a tactic used so often by right wingers to dismiss opinions they disagree with and to make "the other" out of their opponents.

Everyone who lives in Toronto is part of the "real Toronto," including Rob Ford. He ideas should be fought based on their substance (or lack thereof), not on whether or not they fit an imaginary notion of what Toronto is.

Except the "real Toronto" thing isn't just ideological, but geographical.

Check out this map of who each ward voted for.

Though, coming from Etobicoke, I would disagree that, "Toronto is two cities that don’t like one another much but have been forced to cohabitate." Spending most of my life in Etobicoke, I've always felt proud of Toronto, and identified with the city.

That said, I do hate North York.

hi Marissa...yes I do but only when my brother's boat is in the water. Or in winter when I miss the last ferry and have to crash at a friend's place. Ugh. But I love the place and the community, and so does my dog. :)
As for Fordzilla...you are absolutely right. I expect a Toronto mayor to
reflect the values of the most diverse city in the world, and he is just a braying jackass...

hi thwap...please don't suggest that Rob Ford is bisexual or I'm going to have nightmares... ;)
I know some people don't agree with me, but I still think racism and homophobia had a lot to do with the size of his victory.
If non-white people did vote for Ford because they thought he would work for them, they are going to be VERY disappointed...

hi Christina...I probably should have used a better word like the ORIGINAL Toronto, because that's what I meant.
I certainly didn't mean to stereotype suburbanites, but there is a certain suburban mentality that I detest. Ford's comments about how a homeless shelter in his ward would be an "insult" is an example of that. I'm happier in downtown areas social problems and all. And I think that amalgamation has only hurt us ALL...

hi Marissa...thanks for providing the map because it is really striking. When I lived in Montreal I inhabited the McGill Student Ghetto, even after I left school. People said it's not a "real" place to live, but I still love it...

Another name for rob ford is mike harris and those who are smart enough to have known this would not have voted for ford, but then those voters actually think their taxes will magically be lowered after all this slash and burn is done.

They live in a fools paradise, taxes will have to be increased regardless what he does so what was the point of putting this baffoon in office , you would think they would have learned their lesson with the lastman circus.