Rob Ford and the Road to Resistance 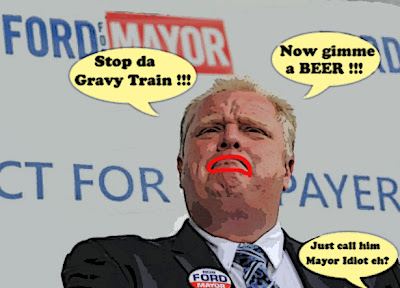 Damn. They say you can't put lipstick on a pig. But that hasn't stopped our pathetic right-wing media from trying to do that.

And sadly even some progressives seemed to have succumbed to post-election guilt.

“We urban-dwellers need to get our asses out of the downtown core from time to time and listen to what people are saying in the suburbs.”

But not me eh? The only thing I regret is that we lost. Because  the fact is the election of Rob Ford is a disaster for this city. And the guy is a reactionary jackass.

Rob Ford: You know, I'm the only one that can go down there [Inaudible, then, yelling:] Just go get changed! Go! Out! And get changed! Don't worry about the water right now. [Pause.] Sorry.

Carol Off: Well you know that your campaign has been compared to Mike Harris's Common Sense Revolution, to the Tea Party movement, do you see those comparisons?

Rob Ford: I don't see [inaudible] comparisons [inaudible] what, I don't care [laughs]. I just, I just know, know the taxpayers, uh, want, uh, you know, the gravy train to come to an end, and that, uh, Rob Ford's the guy to do it, and uh [inaudible]—

That's a Mayor of  Toronto? Gimme a break.

A man whose victory was fueled by racism and homophobia. A swaggering bully who has put down people with AIDS. A callous freak who says if cyclists are killed by cars it's THEIR fault. A grotesque windbag who is always apologizing for being drunk.

A man who has attacked the homeless. 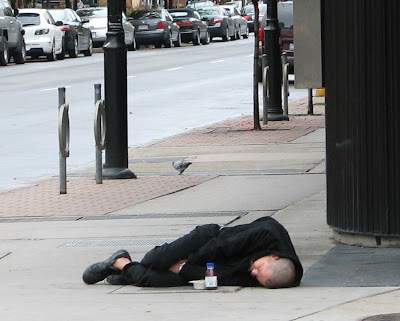 Nah. I've got a better idea. Instead of deluding ourselves into thinking it could be a good thing. Or apologizing to suburbanites who want to work and play downtown, but don't want to pay for it. I say we RESIST.

I say we ask progressive Councillors to block every bad thing Ford plans to do. Let's make Mayor Idiot look like Mayor GRIDLOCK.  Until he surrenders.... or explodes with frustration. And looks like even more of a jackass.

I say we join city workers in the streets during the strikes and protests that are sure to come. I say we stage mass bike rallies and let Ford know exactly what we think of him, by bringing lots of these.

It just seems so appropriate eh?

And above all I say we try to get progressive residents of the downtown and the suburbs to unite and form one mighty coalition to drive Ford and his Con rabble from power.

If this bigot wants some GRAVY. 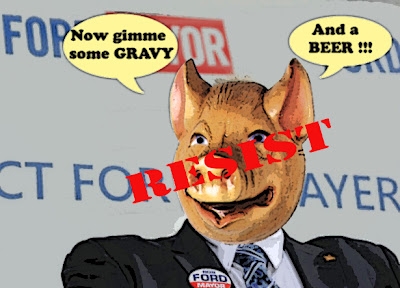 Now what happens next year if Tim Hudak takes over the keys to Queens Park? Polls are showing they have a 12-point lead right now. Would you move back to Montreal then?

What really makes me sick about this is that we're not supposed to criticize the stupidity and/or ignorance of the people who voted for Ford.

I'm sorry, but having lived through mike harris's Ontario, and having seen the revolting effects of the bush II regime, I simply don't have the patience to suffer these fools gladly.

And this perpetual motion machine of stupidity, wherein neoliberals like Paul Martin, Dalton McGuinty, Bill Clinton, and Barack Obama screw us over time and time again, and the decent, and/or smartest 10-15% of the population has watch their political choices mocked by the mainstream media while the rest of the population bounces mindlessly back from neoliberals to neocon morons, ... it's so damned depressing.

hi anonymous...I must admit I don't know much about Tim Hudak. Who Dat? :)
But that's one good thing about Ford. After a few months of him I can see support for anything right-wing falling like a stone.
Because McGuinty is such a wimp, Hudak might have stood a chance, but after Ford no way...

What really makes me sick about this is that we're not supposed to criticize the stupidity and/or ignorance of the people who voted for Ford.

Who says? I've seen some people suggest that, but I don't take them seriously. Democracy is sacred, but people can be FOOLS.

I intend to fight this latest right-wing outrage harder than ever. And I am grateful for the comedic possibilities... :)