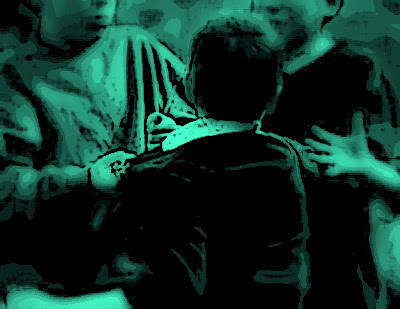 With all the stories about bullying in the news recently I couldn't help thinking how would I react, if I was a dad, and one of my kids was being bullied.

Because it would drive me crazy. I hate bullies of all ages, but seeing a happy child turning into a sad, withdrawn one, and feeling helpless to do anything about it, must be  one of the worst feelings in the world.

Which is another reason, the whole idea of parenthood...which my mother loves so much... makes me feel faint.

And besides as if bullying wasn't bad enough, I recently saw the Swedish film Patrik Age 1.5. Where two gay men think they are adopting a baby.

Only to end up parenting a 15-year-old homophobic juvenile delinquent.

And although the film had a happy ending, I was practically traumatized eh?

But if Seb and I ever adopted a kid. And it's NEVER going to happen Mum.

I hope that we'd be as cool as these amazing parents and their little princess boy...

Because every little boy and girl should be allowed to be who they are. And if there were more great parents like that, the world would be a happier place.

Except that as much as I loved that gentle video, I couldn't help thinking how are they going to protect that kid from the bullies who would DESTROY him?

So all I can say is, I won't be a daddy. Because you have to be very special to be a good one. And I won't wearing purple today.

Because I don't own anything that colour.

But I will remember those dead kids, the children who are suffering in our Canadian schools. And that gentle little princess boy.

And I will fight bullies, homophobia, and all other kinds of bigotry.

When I was young (you don't want to know) a columnist for the RW Toronto newspaper complained that "the homosexuals" had stolen a perfectly nice word "gay" and "sullied" it.

Now, fair's fair and it has now been stolen back from us by the hets to describe......practicaly everything.

Bet you'd be a great dad. You already sound like the sort that would be standing on top of a principal's desk. Not to mention you'd be scouring for a good school to start. And a flurry of other parental anxieties. And filling a lot of photograph albums.

Bullying is a microcosm of tribal Other terrorism and I speak from experience. Not unlike a prison, when you are legally bound to inhabit an institute, if the wardens turn a blind eye, the inmates get the message how far they can push violence.

I managed to solve mine, after years and reaching senior high, by realizing I would never be allowed to go live with relatives far away and that no one was going to stand on a desk for me, but me. So I did. I put myself in the face of the wardens over and over and over again, demanding to know why they let this go on. They finally got sick of me being on their desks and laid down the law on the bullies and It Stopped. I was invisible, but that's all I asked.

The interesting thing I observed (and yes I did observe, since detachment was a coping mechanism) was that the bullies were feeling so entitled, so empowered in their bullying, they considered it normal, the default 'society' position of the school. They were blind to their own cruelty, as cruelty. Finally being confronted by authority on the matter and threatened with serious consequences shocked them.

It just goes to show altering the power of bullies starts at the top.

It does not matter how the bullied one changes behaviours to fit in. It does not matter if the bullied one is a 'true' example of the excuse being used for the bullying. Once the target is picked, it's a duck fu** for the bullies. They violently Other people with the implicit approval of societal authority. They *know* it. They are casually, incidentally, righteous. Like the juvenile members of gangs, they get away with the things that adults are supposed to avoid.

But it's also been going on since forever. Medieval times has many records of young 'morality' squads being used as roaming street 'lessons' to those perceived to be outside norms.

That's why I hunch whenever I hear someone pitching and moaning about 'political correctness' despoiling society. It's always the sound of someone being vilely robbed of privilege by Others and their enablers. You know damn well their kids are listening too.

'Will no one rid me of this meddlesome priest' has many echoes.

Hello, i am doing a book for school and i was worrying if i can use your photo, to use in my book. May i please use it, as a matter of fact it will be a honor. You an contact me at deja.ikira@gmail.com thankyou