Xenophobia, the Cons, and the Plight of the Tamils 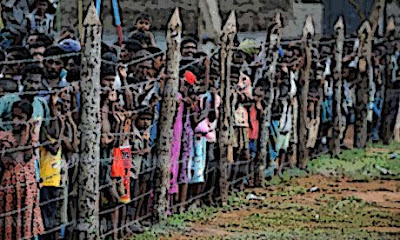 Oh boy. If you want to feel isolated and on the wrong side of public opinion, try suggesting that not only should we give the Tamil boat people a fair hearing, we should welcome them with open arms.

Nobody at work agreed with me. It was scary. I could see their brows furrowing, and their teeth grinding. And smoke starting to come out of  their ears. You said WHAT??? Grind. Grind. Terrorists...queue jumpers...taking advantage of our generosity !!! Making us look like WIMPS !!!  No way eh? Send them back in chains, and seize the ship !!!!

And then as if that wasn't bad enough, then came the decrepit old Con Vic Toews. Trying to stir up fear and xenophobia for electoral purposes.

By grunting through his fascist  zombie hole.

As if it was just some sort of criminal/terrorist plot, instead of the act of a group of desperate refugees. Fleeing the aftermath of a brutal war their side lost, and its bitter aftermath.

The failure to act has left victims of human rights violations with no access to justice, truth or reparations while hundreds of thousands of Sri Lankans displaced at the end of decades-long conflict languish in camps or struggle to rebuild their shattered communities.

The aftermath of a war that lest we forget, ended with a horrifying slaughter of Tamil fighters and civilians.

So if a group of Tamils was so desperate to get away from a place like that, that they jumped the queue, I don't blame them. Desperate people tend to do that.

And when they say this.

"We have come here, to this wonderful country Canada, to protect ourselves and our family members from the murders, disappearances and violence that still exist in our native country."

I believe they deserve the benefit of the doubt, and a fair hearing.

And I think the way the Cons are behaving is beneath contempt.

“It’s is not the first time that the Canadian government has whipped up public anxiety at the arrival of asylum-seekers,” said Myer Siemiatycki, a professor in immigration settlement studies at Ryerson University.

What’s playing out “is the sixth or the seventh sequel of some Grade B horror movie called Here Come the Boat People,” said Siemiatycki. “It’s the same thing every time … it’s tiresome, unworthy of Canada.”

Oh boy. What have these Cons done to us? And how soon can we get rid of them?

Montreal Simon, you're not alone. I also say to the Tamils welcome to Canada.

The propaganda that these people are "queu jumpers" is a lie being perpetrated by the Harper regime.
There is no queu for asylum seekers. The so-called queu is for a backlog of applications for immigration, not asylum seeking.

I know it's hard for the Conservative mind to conceive of a difference between these two since it requires distinctions that are difficult in the black and white world of [Anglo-white Canadian]=good and [immigrant=criminal]=bad, but nevertheless according to custom and law (something that the conservative mind also has difficulty distinguishing from repression), yes, nevertheless immigration is different from asylum seeking.

Another question is why is there a "queu"? If the restrictions on immigrants that we have now existed when Mr Toews's family entered Canada, he might still be waiting in the "queu." The "queu" is not the creation or the fault of immigrants it's the creation and the fault of progressively more xenophobic immigration policies in our country.

By the way, I think I was wrong about Mr Toews's family. I believe that he comes from a Mennonite family and many Mennonites were admitted into Canada as asylum seekers, so his family would not have been in the "queu."

I have a standing offer out to Tamil workmates to help whale on anyone bleating and yapping xenophobic robot points in entitled disregard of the facts.

Ok, it helps nothing, but puts a momentary smile on said workmate's face this week.

What I love about the entire thing is the shriekers couldn't tell the difference between a Tamil and a tamarind, they have no idea there are Tamil-Canadians within hearing, but dang, it's our very own Tea Party outrage!!1! Hootmon!!

It's a bonding moment of shared hate with cousin goofheads south of the border. Run, screaming in circles, like overexcited dogs chasing their tails, filling the air with howls when they actually bite them, but unable to stop chasing that which is wagging them.

Simon: Thought I'd follow up on a point raised by other Anonymous above.

According to Wikipedia, Vic Toews was born to a Mennonite family in Paraguay and immigrated with his family to Manitoba in 1956: http://en.wikipedia.org/wiki/Vic_Toews.

Paraguay had welcomed the Mennonites who had come from European countries/Russia: http://gosouthamerica.about.com/cs/southamerica/a/ParMennonites.htm.
Canada had also accepted many Mennonite refugees after the second world war: http://www.ucalgary.ca/hic/issues/vol4/7. Perhaps Vic Toews has forgotten this?


This is taken from another entry in Wiki(http://en.wikipedia.org/wiki/Paraguay ): "After World War II, politics became particularly unstable with several political parties fighting for power in the late 1940s, which most notably led to the Paraguayan civil war of 1947.[11] A series of unstable governments ensued until the establishment in 1954 of the stable regime of dictator Alfredo Stroessner, who remained in office for more than three decades. Paraguay modernized to some extent under Stroessner's regime, though his rule was marked by extensive abuses."


Thus one could ask whether Toew's family left Paraguay to escape the abuses of a dictator and whether they entered Canada as refugees/asylum seekers. If they did, Toews himself would likely not have been here had it not been for the generosity of past Canadians. He could be seen as hypocritical on this issue.

Mennonites are actully very supportive of people who flee from their homelands, as you would expect from people who have strong beliefs in God's love: http://canada.mcc.org/refugee.

But then again this is the same Vic Toews who stood up for family values and where did that lead to, eh?

Looking at the latest poll, it seems that Canadians are not listening to you at all...

That does seem a bit high (especially in Quebec - overpolling of rural areas), but it does seem that Canadians are not the "tolerant" type that many think they are.

hi anonymous...Good point. There is nothing to justify this explosion of xenophobia. We can easily handle these applications, and refugees are naturally desperate.
I'm sure there are some abusing the system, but it's not fair to tar everyone with the same brush, and although I hate to say it, I blame racism...

hi Niles...you're right, the ignorance surrounding this xenophobic eruption is simply outrageous. I'm sure most of these quacking racists have no idea about the situation in Sri Lanka. I'm almost sure most of them couldn't find the place on a map,and I wouldn't be surprised if they thought the Tamils were Muslims.
But then with a government that encourages ignorance and bestiality what do we expect?

hi anonymous two...I happen to know some Mennonites and they are wonderfully human people. As well as
excellent cooks. Yummy. :)
And thanks for the research. It would be ironic wouldn't it, if Toews came from a refugee background. But sadly that's the pattern of history. One group gets in, settles down, and then tries to stop others from doing what they did.
The fact is these Tamils will be given a hearing, and if they are determined not to be genuine refugees they will be sent back. So what is the problem. Answer: too much ignorance and not enough humanity..

Hi anonymous three...yes I've seen that poll and it depresses me. But it won't change my mind. I'm just trying to be a good person, and if others don't care about that, well that's their problem. And they should be ashamed of themselves. One thing is for sure you don't build a great country that way...