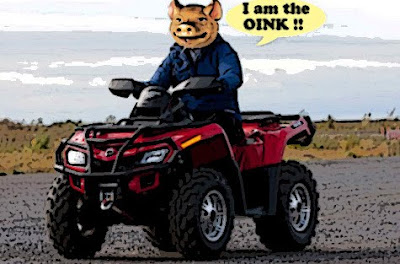 Uh oh. I knew it had to happen sooner or later. Stephen Harper would get away from his handlers, and declare himself the Lord Porker of Canada.

When asked if he had a licence to drive an ATV, especially on a runway, Harper said, "I think I make the rules."

He was clearly very pleased.

And who can blame him eh? He may be driving the country into The Abyss. He may be increasingly despotic and irrational.

But he knows all he has to do is pretend he is half human, play the piano, or dance for a majority.

Although his dance may have been unscripted, Evans said it is part of Harper’s ongoing efforts to soften his public image. Much like his warbling Beatles’ cover, the moment gives the Prime Minister a folksy, everyday charm. “It’s all part of image-making.”

And the pathetic media in this country will just suck it up.

When the prime minister returned, he took off his helmet and took a few questions for the journalists who asked him if he had fun.

He smiled shyly, like a little kid who had just been around a Go-Kart racing track. 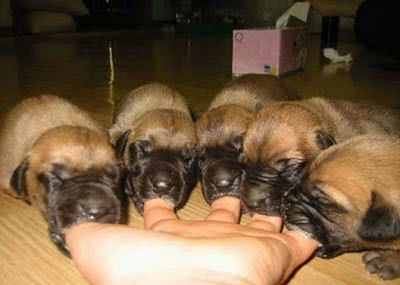 Because why bite the hand that's strangling suckling you eh?

Gawd. As if encouraging a man like Stephen Harper to be impulsive is a good thing.

When he's preparing to declare war on the Russians, clubbing reason like a seal.

And he'll do ANYTHING for a majority.

Even it if KILLS Canadians.

As front-line physicians in emergency departments, we regularly witness the horrific injuries and deaths that result from firearms. Our membership has instructed CAEP to vigorously support efforts to reduce the tragic human toll associated with firearm misuse by opposing the repeal of the long-gun registry

As my country slowly turns into an insane asylum..... or a giant prison..

Except crank up the volume, and send the Cons and our stooge media this message:

Lord Porker is a maniac.

The day of redemption is coming.

And of course FUCK YOU...

Inside Harper's insane mind is where we are. If Harper creates his own reality, as they tell us one's mind can do, we're living in his reality, and it seems we're powerless to prevent it.

What we need are some expert FBI-type profilers, because I think he's nuts.

That "Fuck you" scene is a take-off from HAIR, movie made in 1979; I wonder where that spirit went?

I love that FU song. It fits so perfectly when discussing Harper.

Prince Philip, Duke of Windsor, did exactly this when he visited the Canadian North. It's a matter of record. He took off in a car I believe, and had the Mounties chasing after him. So dashing of him, and what a man!! Looks to me like Harper followed suit - he probably studies these people carefully.

I'm also sure that he staged a JFK PT-109 type photo of himself in a boat, last year or thereabouts. Same hairdo, although he couldn't quite cut the same pose. Remember the fuss about him not wearing a lifejacket?
Young, stylish wife, etc. Like Jackie. I have heard religious adherents of his talk about how it's a "young family" being "attacked by the evil Liberals"; and it sounds like a Biblical narrative; and also sounds like JFK's young, attacked family.

All this stuff is so carefully staged. It's not so much that he's paranoid about his appearance, it's that each photo, each piece of info about him has to conform to a hero-figure. That's how he wants to be perceived, because that's the audience he's playing to. "All the world's a stage . . "

The announcement in front of the whale tank recently in Vancouver. "I'm in the belly of the whale"; which is Biblical, (Jonah) and a euphemism for really working hard through difficulties. Gone all summer.

Harper's always playing to an audience, always staging things, always calculating. The guy should've just gone for acting. There are enough movie companies around Alberta; he could've done it.

Anyone calling him "Duke" yet?

Inside Harper's insane mind is where we are. If Harper creates his own reality, as they tell us one's mind can do, we're living in his reality, and it seems we're powerless to prevent it.

OMG. That's BRILLIANT. I hope you don't mind if I steal it. ;)
You know people than I'm kidding when I say Harper's not all there. But actually I'm not.
And I also love your idea about re-doing the I am Canadian rant.
Damnit what are you drinking? I NEED some... :)

hi anonymous two...good comment. I should have said something about this "spontaneous" photo-op. Because everything the Harperites do is planned down to the last word or the last fern in the background. I'm sure Harper practiced that ATV run somewhere, either by borrowing his wife's Harley, or mowing the lawn at 24 Sussex at three-o-clock in the morning. Never in the history of this country has a Prime Minister spent so much time and money staging one photo-op after the other. It's all fake, it's all plastic, and luckily for us it seems to be getting him NOWHERE... :)