Why Do the Cons Hate our Troops AND our Police ? 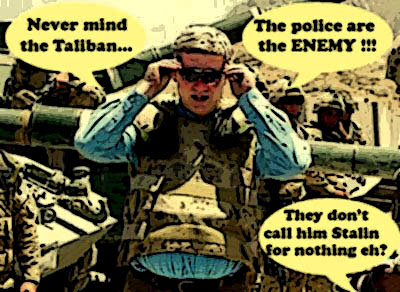 Well this is the absolute limit. Is there nothing this swaggering bully won't do? How low can he go?

First he poses as a friend of the troops, Commander Stalin or Napoleoni, and then he abandons them.

Then he poses as a crime fighter. Says he's going to go after the invisible criminals.

Only to go after the police.

Cheliak had reformed the program and lobbied forcefully, including before a parliamentary committee, for a continued long-gun registry, something the Conservative government has been determined to scrap.

Some police officers are questioning Cheliak's removal on the eve of September's expected battle in Parliament over a Conservative private member's bill to scrap the current registry.

"I question why he's been transferred and who has made this decision to transfer him," said Charles Momy, president of the Canadian Police Association. "But it seems interesting that all of a sudden this transfer occurs when we know the vote is coming on this bill.

And let's not forget how these thug Cons delayed a report on the gun registry until after the vote to kill it.

Even though they knew it can save the life of police officers.

And the paramedics and firefighters who work with them.

And why? Just to please the gun nutters in their rabid base. Who are too dumb or lazy to fill out a form. Could there be anything more DISGUSTING?

Oh why oh why do these Cons hate our troops? Why do they hate our police?

Why do these crazy bastards hate women so much?

You know...these sinister totalitarian Con klowns have muzzled everyone from civil servants to their own pathetic sheeple caucus.

But when they try to stop police officers from speaking out to protect their lives and the lives of citizens they are sworn to protect, they have gone too far.

If we can't defeat them tomorrow. In the name of human decency.

When can we ARREST them?
Posted by Simon at 4:19 AM

As I've said, Simon, Now is the time to write your MP. It's incumbent upon us to take action. Lord knows the media is going to work feverishly overtime to slam the opposition and make absolutely sure an immediate election won't be favorable for them.

I read yesterday a few articles; it seems that none of 'em are rarin' for an election until at least Spring 2011, most likely when the Harpercons hand down their budget, which will more than likely be an austere one. Not good enough. By then, Steve will sure have found "people" to support the scrapping of the census; the media will have sold it sufficiently; it will facilitate his scrapping of our social safety net, which will no doubt play a large part in the upcoming budget I mentioned.

Yes, Iggy's bus tour was a success, and his polling numbers improved somewhat, but how long will that last particularly when harpercon media like Kory Klan Fox North Sun and Natty Po will work overtime as I've mentioned, to discredit to the bus tour; they've already started that.

I don't see Iggy's numbers improving all that much and Steve has a propensity for bouncing back to majority territory.

Duceppe's sovereignty movement is growing and will no doubt play a role in his next election campaign, but that won't deter his seat wins in Quebec. Most Quebec Anglophones aren't that attached to federalism these days anyway, especially with Steve running the show. I can tell you this for fact.

NDP's numbers never seem to change; they always hover between 15%-20%; no matter when an election is held.

Right now, the worst that can happen is that STeve wins a reduced minority. That, in itself, is already a small improvement as Steve would need at least 2 opposition parties to get anything done instead of just one. Steve's little divide and conquer games wouldn't be as successful. It would definitely take the wind out his sails. Plus, we can perhaps see many of these creepy harpercons out of commission for good.

Liberals will surely have another leadership convention at some point and Iggy would surely lose. Either way, I don't see Iggy sticking around that much longer.

hi ck...you know whenever I feel like a pessimist you come along and make me look like a sunny optimist. Thanks :)
My hope is that all of these events will have a cumulative effect and lead to Harper's downfall. And I'm not worried about the MSM as much as you are. There has been a lot of criticism of Harper's moves in serious newspapers...even the National Post...and as for Kornhole and his Klowns at Sun media who really cares what they say or grunt? Harper is damaged, all that remains to be seen is whether the opposition can rise to the occasion. I was dubious about that, but of course now that I read your comment I'm wildly optimistic... ;)

How can a Conservative law-and-order leader be against the police--the very enforcers of law and order.

Isn't there some logical fallacy there, somewhere? Or is Harper finally unravelling?

hi Torontonian....good question. They pose as crime fighters and try to scare people into voting for them. Then they betray those on the front lines to create a wedge issue and win themselves some more votes. Nobody is saying that this country is perfect eh? But we are better than that...