The Gun Registry, the Chiefs, and the Women 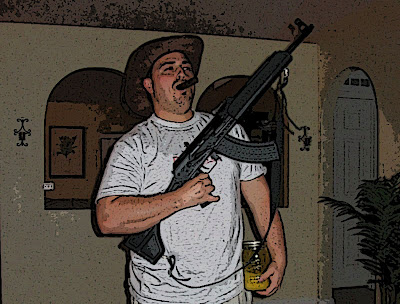 I'm glad to see the police chiefs of this country have sent a strong message to gun lovers everywhere. We are not Amerika. And we support the long gun registry

Despite the Con attempts to intimidate them.

Kuntz organized a straw poll of officers earlier this year through a police member's forum called Blue Line. He said 92 per cent of the 2,631 respondents to his "simple survey" voted in favour of scrapping the registry.

Which I don't believe for a moment. Because I wouldn't trust the gun lobby as far as I can spit. I trust the facts. The long-gun registry does work. It does save lives.

And when these gun nutters say it doesn't make a difference when police officers are called to intervene in some problem, I beg to differ. So do the officers who use it  14-thousand times a DAY. And so does she.

A family contacted their local police because the father was in a depressed state and they wanted the police to remove all of the firearms from their home. Family members told the police what firearms were in the house. Local police then checked the long gun registry online, which revealed an additional 21 long guns in the home that other family members knew nothing about. Police obtained a warrant and removed all the guns.

The long gun registry costs Canadians $4.1 million a year to operate to track nearly 7 million guns — about 60 cents a year per firearm. With 100,000 women and children leaving their homes in Canada each year fleeing violence, and almost 600 missing and murdered Aboriginal women, the long gun registry is an essential national investment. Does it save lives? On the facts alone: Yes.

And quite frankly on this issue I'd rather hear from women than any other group of Canadians. Because they are so often the victims.

Women have the most to lose if the long-gun registry is abandoned. During domestic violence calls, police use the registry to check if a long-gun is on site. Statistics from the Domestic Violence Death Review Committee found firearms to be present in 47% of domestic homicides in 2007. A woman is 12 times more likely to be murdered if a gun is involved in domestic violence, and the guns most commonly used in domestic violence are long guns, not handguns.

There is a problem with the registry because the Cons have been encouraging gun lovers not to register their guns, so the data is being compromised. We're losing track of guns all over the country.

But the answer is to crack down on those too dumb, too lazy, or too paranoid to fill out a form.

Not throw out a useful tool, and turn our country into Amerika.

I admit I want to discourage gun use in Canada. Especially in urban areas. I hate societies full of weapons. I hate the fact that they threaten police officers, paramedics, firefighters, and ordinary citizens.

And some of the people I love.

But most of all I hate what they do to women.

And I will not FORGET...

P.S. Gun lovers please spare me your comments. I was willing to argue with you to try to find a compromise. But you wanted all or nothing. So you can have NOTHING...
Posted by Simon at 11:12 PM

Simon, have I told you lately that I love you? Because I do! And this blog is so right-on right now! You always get it just right. Thanks! <3<3<3

While most of what I have are heirlooms and historical pieces better suited for clubbing someone to death than a police stand off, I was more than willing to comply and register when I inherited them.

I also willingly destroyed $5-7 grand worth of pistols (money I could have used to pay for a funeral)rather than upgrading my license to restricted and keeping them, nor would I sell handguns into general population no matter how much I need the cash.

I love my guns as they represent 150 years of of my families 250 year history in Canada, but I also love a safe and civilized society.

I wonder could we take the gov to court for refusal to enforce the gun registry, dereliction of duty, conspiracy? would not the constant extensions be contempt of parliament?

hi CanNurse...thank you for this sweet comment. And the feeling is mutual. :)
As for my blog...I think you are a bit generous. I have to admit this hot humid summer, and the neverending Harper horror, have wilted my spirits a bit.i.e. made me even MORE lazy. I was hoping to make some more videos, but I just couldn't. However, now that the fall approaches, and I'm almost sure the Cons are going to go for an election, I'll try to make up for it...

hi anonymous...don't worry I don't. And I must say I find your comment inspiring. This is a difficult issue, and it's being used by the Conservatives to pit Canadians against Canadians. But your position is exemplary. I don't want to take guns away from anyone, all I want is to have them registered. It's a citizenship thing, just like filling out any other form. It may be annoying, but it makes us part of a community.
So congratulations I hereby declare you a model citizen !!! :)

You're a funny guy. This garbage you collect and spew does nothing but alienate and divide Canadians.

'Montreal' Simon. Yeah. I'm not very surprised at the Montreal part. Why is it that every bizarre, hate oriented mass-murderer seems to spawn from the same place that has produced... you?

Tell me. Are you one of those losers who walked out on the women at EP and left them to die, alone and unarmed in that classroom?

I'm fighting for my daughter's rights. I'm fighting to make sure that when some strung out goof like you finally short circuits in her classroom, she'll be armed.