Con Canada and the Madness of Stephen Harper 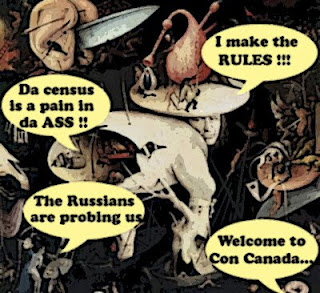 I know people say I go on and on about the madness that is Stephen Harper's government.

But what else can you say about a government that when called upon to defend its insane decision to gut the long form census, can only summon these kind of witnesses?

A guy who admits he's never even seen one, a farmer who doesn't know what he's talking about.

James Henderson, a farmer who also spoke in favour of scrapping the mandatory long-form census, said the process was not only burdensome, but also costly.

Under further questioning, however, it emerged that it was not the long-form census but the census of agriculture that required the services of accountants to complete. That census remains mandatory.

And a radio talk show host who doesn't know why he's there.

Hey the politicians must be desparate. I have been “invited” to appear at the Industry Committee in Ottawa about the census long form. Why?

Or how about Our Lady of the Rednecks, Candice Hoeppner, who is trying to kill the gun registry and says an RCMP report, the Cons are concealing, won't make any difference.

“I don’t believe any of these reports make any difference whatsoever,” said Ms. Hoeppner. “It’s been years of mismanagement and waste and there’s not going to be a report that changes our minds.”

Because hey she may be an ignorant redneck, and as dumb as a spoon, but she knows better. So there.

And then of course, there is Stephen Harper claiming he is nation-building, even as the country shrinks.

During Mr. Harper’s visit, a huge chunk of ice, estimated to be the size of Bermuda, fell off the country’s largest remaining ice sheet, on Ellesmere Island.

Or claiming he wants to save the Inuit AND the belugas.

When in fact he's planning to drown them all in a sea of oily goodness.

I mean what can you say about that eh?

Except that this beluga must be really disappointed. 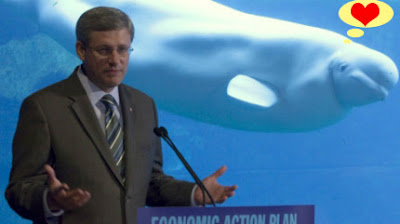 Because it was love at first sight. But now he says Harper can forget about rubbing his blow hole, and blow himself instead.

And of course I agree. I'm just sickened by what these Cons are doing to my country. And I'm worried about what that  tin pot dictator might do next to try to fool Canadians into thinking he's a nation builder...and almost human.

Because at this point I believe he's capable of ANYTHING.

So if I lived in Saskatchewan I'd be REALLY worried...

Golly. You know I always knew the madness was incremental.

But when is enough ENOUGH?
Posted by Simon at 11:53 PM

Steve's insanity has always been incremental, however, as of late, his agenda appears to be advancing in bigger steps, as I'm sure you've observed.

You write a colourful story there. Mullet head Hoeppner has disappeared it would seem, leaving the PR to Airhead, Shelly Glover & Super Toews.

Antonia Z wrote a great article with more compelling facts and arguments to keep the long gun registry; well worth the read:

Particularly when it comes to conjugal violence.

As for that radio host who doesn't know what he's doing there, as you put it, think about this, does any Harpercon cheerleading radio host as well as any of the Kory Klan really know where they really are and what they're doing where ever it is they are? Won't be the first; certainly won't be the last. I'm surprised some of those blogging SupposiTories can dress themselves without help from their mommies; really!

Enough is now, I say. I think there will be an election this fall. Let's hope this gets ol' Stevie spiteful out of office or at the very least, reduce his minority.

He's campaigning in the north pushing that coalition paranoia. Sad that misinformation could win out. I know for a fact that Duceppe is not going to be joining in any coalition any time soon in any capacity. He is preparing his own election campaign though. It's similar to the campaign of 2008; "he's the only one who can stop a Harper majority and block him in Quebec". Worked in 2008. Could well work again. Sovereignty could be hinted this time, but since he's a federal leader, he's not in any position to promise a referendum; only PQ can do that next provincial election campaign.

hi ck...Stephen Harper has had some meltdowns before, and I predict it will happen again. The Cons have waged everything on a fall election, and by all appearance they are coming up short. So that's why they are pulling out all the stops, playing every wedge issue they can. Unless the opposition parties play their cards right, we could still be in big trouble this fall...