The Bubba, the NDP, and the Gun Registry 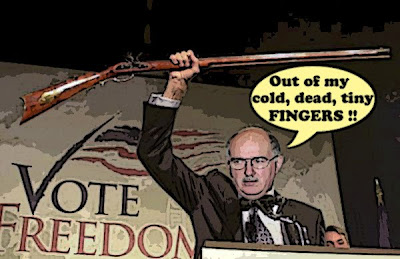 Why are the police chiefs so strident in their quest to keep the registry in place? They won’t admit it, but it appears they don’t want Canadians to own guns. To that end, they need a database that will help them locate and seize those firearms as soon as a licence or registration expires.

When law enforcement managers try to write the laws they enforce, history has taught us we risk becoming a state where police can dictate our personal freedoms.

Can you believe it? One of the slobbering followers of the crazed tin pot dictator Stephen Harper standing up for OUR personal freedoms. Posing as a crime fighter while attacking the police. And so soon after this ugly and cowardly  incident.

Gawd. No wonder they call him Bubba Bratwurst eh?

“In the Fifties, buggery was a criminal offence. Now it’s a requirement to receive benefits from the federal government.” Garry Breitkreuz, National Post, Nov. 21, 2000

“Breitkreuz says the fundamental question of fetal rights must be determined before Parliament can address what he calls “the atrocities now occurring” in the field of reproductive technologies.” – Star, Feb. 12, 2001

Because when a bratwurst screams "buggery" and a Con porker shouts "police state" you KNOW we're in trouble eh?

The surprising and depressing part is that some in the NDP are willing to play footsie with gun nutters and bigots like Bubba Bratwurst.  To defend the "sacred right" not to fill out a form. Even if it KILLS Canadians.

Instead of standing up for what's RIGHT no matter what it costs them. Like the great Tommy Douglas did during the War Measures Act.

Oh boy. I hate this manufactured debate. I believe in a united left. I hate to see us fighting ourselves when we should be joining forces to fight the hideous Cons. I'm very partial to the NDP, I love Jack Layton, I voted for his wife in the last election.

But sadly if the NDP finds itself in this unfortunate position.

They shouldn't blame the Liberals for standing up for principle. They have only themselves to blame.

Do the right and decent thing thing Jack. The crazy gun nutters aren't interested in compromise.

And then everybody TOGETHER. 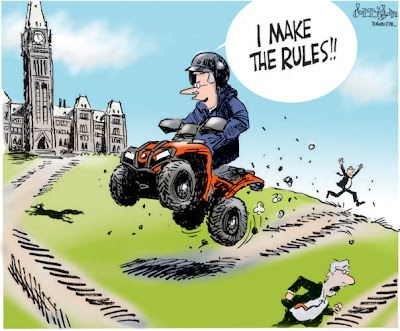 Cartoon: Ed Corrigan The Star.
Posted by Simon at 7:25 PM

I just finished sending out letters to NDP Members in Manitoba and Con and one Liberal Members in Winnipeg. I'll be curious to see what responses I get.

But seriously, who the f*ck would want to be perceived as being in bed with Garry Breitkreuz. I read an e-mail exchange between him and Charlie Angus and the latter gave him a pretty decent slap-down.

hi Beijing...I feel bad for the NDP because they are the victims of Harper's bestial wedge politics. But we really have to draw the line somewhere. And putting political expediency before principle and our Canadian values, should be beneath them. So I'm keeping my fingers crossed... :)