Why Do the Cons Want to Kill Canadians? 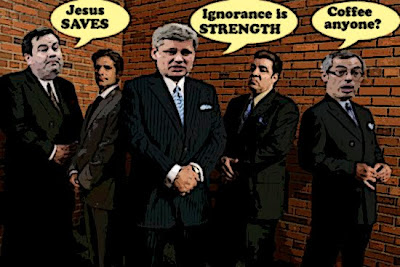 I used to think that Tony Clement looked out of place in this family photo of the Boys in the PMO.
I thought he was just a goofy gopher and Boss Harper fart catcher who does what he's told.
But after reading this story I've changed my mind.
Last fall, the Royal Canadian Mounted Police and the British Columbia Centre for Excellence in HIV/AIDS, after months of intense, private talks, agreed to face the media together to declare their agreement that research shows the “benefits” and “positive impacts” of supervised injection sites for intravenous drug users.
The proposed joint media release was never issued. Nor did the RCMP officers and the centre’s doctors appear together for their planned news conference. According to Montaner, two days before the scheduled event last December—after a venue had been booked at the University of British Columbia and “the banners were ready”—he received a telephone call from Deputy Commissioner Gary Bass, the most senior RCMP officer in British Columbia. “He said, ‘Julio, can’t do it,’ ” Montaner recalls.
“I said, ‘What do you mean, Gary?’ He said, ‘I’m really sorry, I’ve been ordered not to go ahead with the news conference.’ ” Montaner says Bass made it clear that the order came from RCMP headquarters in Ottawa.
Now I think Clement and his foul Cons should be ARRESTED for putting their evil ideology before the lives of Canadians.
Because let's be clear. Tony Clement may call it an "abomination." But Insite is a smart and wonderfully human idea.
It's supported by the people of British Columbia.
It does help some of our poorest and most desperate citizens. 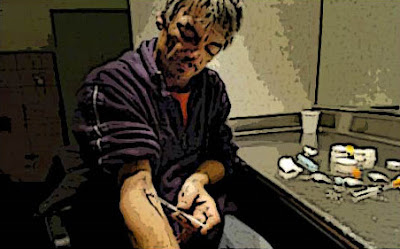 It does save lives.
And any government that is willing to hurt or kill its own people to please its ignorant, rabid base, is an absolute ABOMINATION. And must be removed from office as soon as possible.
Oh boy. I know I'm always asking the same questions eh?
But why are the Cons always trying to turn the RCMP into their own private security force?When is ideology murder?
And when is enough ENOUGH?
Posted by Simon at 11:45 AM

Enough is never enough with these people. They want it all and they are working feverishly to get it all.

hi Jymn...It does seem so doesn't it?
And feverish is the word. You know putting ideology before reason on the census issue is bad enough. But I suppose I can live with it...embarrassment isn't fatal. But when they start threatening the safety and the lives of Canadians that's where I draw the line. This government really is an ABOMINATION...

Speaking of Harper and his disdain for those fighting make HIV/AIDS history, whatever happened to the Gates subsidized initiative for research into a vaccine? At least two Canadian University and a Winnipeg's federal research lab had put in proposals to conduct the work and the next thing you know, the feds canceled making a decision.

Just when our society begins to make progress we have in power a government who prefer's to see us drive in reverse.

By: To answer your question, at least partially.

ck, I just checked out your post. So they really did just discard it altogether. Not surprising but WTF, where is the fucking media when you need them to expose this idiocy.

As for the Christian Youth Centre in Winnipeg, I am still sickened by that move. Pat Martin is not my favourite dipper but he tried to draw attention to this move and thwart it. I really felt like his party was not behind him on this because despite federal funding, the issue got dropped like a hot potato.

I am still appalled that this faith-based initiative got through without barely a whimper (Pat Martin withstanding). My faith in politicians had been already pretty low but this was like another painful example that Harper had seamlessly conquered his foes.

Hi Beijing York...good point. His indifference/hostility to the AIDS issue is another mark against the man. The vaccine initiative ended up nowhere, he boycotted the AIDS conference in Toronto, he just doesn't care. Just like he doesn't care about the women's lives that could be lost by failing to provide safe abortions. He would replace the humanity of harm reduction with the vengeful commands of the Old Testament.
I knew right from the start of his regime that it was going to be a nasty experience. But I have to admit I never could have imagined how cruel and ghastly it was going to be.
Oh well. At least I didn't call him a monster for nothing eh? ;)

I don't call him a monster for nothing...

hi The White Pillar... I once believed that Canada would lead the world into the 21st Century. The Economist was calling us cool. I must admit I was easily flattered. I was proud that so many people in the world thought we were a model forward looking country. And then along came Harper and let the air out of that balloon. I dislike him for so many reasons, but I think that one hurts the most...

hi ck...yes I remember that story. You know part of the problem I'm having is that Harper has done so many dreadful things it's all become a bit of a blur. With the short attention span of the media and the population, Harper and his Cons are only as bad as their last scandal.
But if you make a list and look at it you really have to wonder why he's still Prime Minister. And whether that says more about us than it does about him...

You know very well from first-hand experience the watchwords are
"First do no harm" . . .

Most people know that Insite is a harm reduction facility.

The failure (there is no other word) of the Conservatives to not make the connection is breathtaking since personal religious beliefs trump reason and common sense in this situation.

I wonder how many former users would have appreciated having a harm reduction facility during their addiction ordeal.

If I'm not mistaken, Toronto still runs the Schoolhouse just up the street from Seaton House and it is/was a harm reduction centre.
And I remember Rob Ford getting angry about the supplies going into that place to help the most vulnerable.

It seems that if a situation doesn't fit their little world, then it's not important and a waste of taxpayers' money.