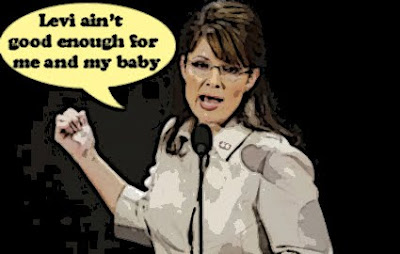 Oh. My. Wazilla. Remind me never to write ANYTHING about Sarah Palin's family again.

I just can't keep up with those rednecks. Just when I thought Bristol and Levi were about to ride off into the sunset, like Cinderella and Prince Charming ...in a pickup truck.

On the way to a brand new reality TV show

The story hits another road bump.

It's over. I broke up with him"

Bristol told People that Johnston's second proposal was blighted from the start when he told her on the day they became re-engaged that he might have fathered a baby with another teenage girl.

"The final straw was him flying to Hollywood for what he told me was to see some hunting show but come to find out it was that music video mocking my family," Bristol said. "He's just obsessed with the limelight and I got played."

And at least Sarah was sympathetic...

You know I think I like that redneck Evita better when she pretends to be a good mother, instead of a serious politician.

Is America ready for a satire on the Palins or is such a satire impossible given their daily carryings-on?

It's enough to give me a brain freeze.

hi Torontonian...I doubt the Palin would allow Bristol and Levi anywhere near her. So it would just be the two of them. And after they had gone shopping and hunting, I'm not sure what else you could say. Although I understand there's a crazy sister somewhere who is rabidly jealous of both of them so that could be interesting. Or not... ;)