Rex Smurphy, the Mosque, and the Street Car 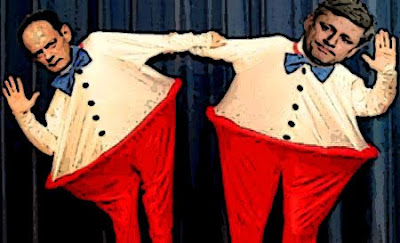 As you know I am not a fan of Rex Smurphy. I consider him a ghastly tea bagger who regurgitates Con talking points out of every orifice in his tiny body.

An absurd climate change denier and Harper Tweedle Dumb whose apparent popularity makes me wonder whether this country is populated by idiots easily impressed by big words.

And this recent column in the National Post made me want to vomit.

Because it was so outrageously bigoted and ignorant. And the last thing we need in this country.

So you can imagine how I felt when Sébastien called me up at work and told me a streetcar had hit a car, right in front of the Harbourfront Starbucks. 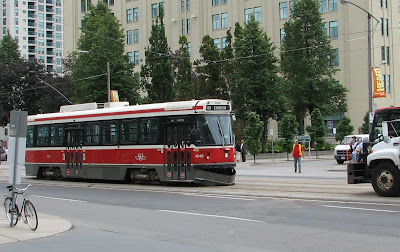 It happens all the time when cars try to take a short cut across the raised track.

But guess who was in this car? 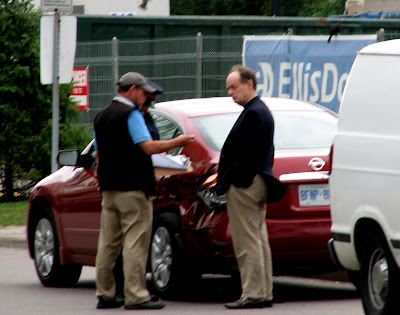 The little nit himself. And his buddy on the left, who was apparently the driver.

Now I don't know how it happened, or who was to blame, because Seb only heard a loud bang. And I'm glad nobody was hurt. Although hundreds of street car users were no doubt grossly inconvenienced.

But since the streetcar WAS on a designated track, I'm sure it was embarrassing enough... 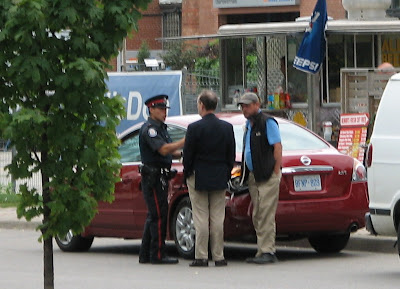 And after taking a close look at this shot, I have to say the police officer doesn't look like the kind of guy who would be impressed by big words.

Hey Smurphy. You Con klown . Isn't it time you RETIRED?

And on that happy day, don't let the streetcar hit you on your way out.

P.S. Sébastien takes about thirty per cent of the photos in this blog...including some all of the best ones. I don't give him enough credit , but tonight he gets the OSCAR...
Posted by Simon at 9:02 PM

Hey Rex, you know who Pierre Elliott Trudeau is, right? You know, the guy who's responsible for the Canadian Charter of Rights and Freedoms? The legal document that guarantees freedom of religion? If that doesn't ring a bell, you might remember him as THE MAN YOU REPRESENTED ON "THE GREATEST CANADIAN".

At the time, I wondered why Murphy's video was so mediocre compared to George Stroumboulopoulos' video of Tommy Douglas. I guess it makes perfect sense now.

LOL,"don't let the streetcar hit you on your way out the door", lololol!!!

You can practically see his face get red with boiling anger when a caller insists on making points that are contrary to his favoured position on "Cross Country Check-up". I applaud all those upstarts who refuse to let Rex Murphy cut them off.

I agree entirely, as I almost puked as well at "Wreck" Smurphy's Comments on the New York Mosque.
I can't find the exact quote but this one will do.

“We have been making "ground zeroes" next to Iraq's Mosques for a while now and to date the 'right' has not yet complained.”

Hi Brent...I'm sure Smurphy used to remember Trudeau, but over the years he seems to have evolved into a right-winger with a real American streak. I'd have to pinch myself to believe I was hearing this wingnut nonsense on the CBC, if I hadn't got so good at diving ...and I mean DIVING...for the remote control and muting him or switching channels.
I think Smurphy is cruising on his old reputation as a wordy curmudgeon. (which BTW I could live with.)
But now he's just UGLY...

hi Kim...I wasn't really exaggerating, when I read that column for the second time I didn't vomit but I did feel nauseous.
Why he would choose to wade around in that stinky American swamp is simply beyond me.
And of course, from a strictly logical point of view, none of his arguments made any sense at all.
They were simply grotesque and unworthy of a Canadian..

hi Beijing York...yes that was a bit awful of me wasn't it? ;)
I'm not usually that rude or nasty, but it was only a small crash, Smurphy wasn't hurt or Seb would have treated him, before the paramedics arrived. OMG !!!! And after reading that column for the second time I was furious. I mean I'm an atheist eh? But I thought the way he inflicted collective guilt on all Muslims was simply appalling. The arguments in the U.S. about that mosque are absolutely evil and crazed, among the worst I've ever seen. We need to bring that shite into our country like we need a hole in the head...

P.S. I really should have called this post A Streetcar Named Smurphy... :)