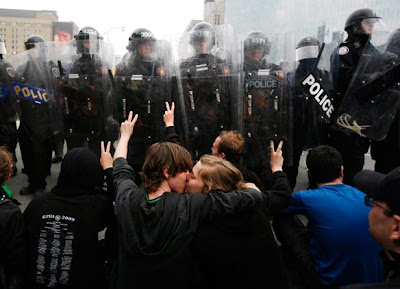 On a day when I was depressed after reading how the Harper Cons ignored International Youth Day.

Because they're too busy waging war on Canada's young people with the consent of a lot of older Canadians.

Despite the fact that the youth crime rate is at a 10-year low, their generation has been stereotyped as a threat to public safety. The Prime Minister, with no significant resistance from the federal opposition leaders, the provincial premiers, the big-city mayors or the courts, has enacted law after law to lock up young offenders, punish drug dealers and break up street gangs.

Despite the fact that young Canadians have led global humanitarian campaigns, created thriving businesses, raised environmental awareness, won civic office and worked at the grassroots level to build stronger, more resilient communities, few of these achievements are recognized in Ottawa.

Despite the fact that they’ve adapted to an ever-changing global marketplace, relinquished any prospect of job security and learned to live in a 24/7 world, none of this seems to count in their favour.

And I know this to be true because I hear it all the time. The young people of today are no good. They're lazy, they're whiners, they're DANGEROUS.

So on a day when I'm shaking my head about that, who should arrive on my teeny island to cheer me up ?

Only one of the hottest bands in the world, Arcade Fire, from Montreal, Québec, Canada.

The band whose new album, Suburb, just knocked the homophobic, misogynistic prick Eminem's new album out of the number one spot on the Billboard chart.

My buddy and I didn't know they were going to perform...in our backyard. Duh. So we didn't have tickets. But it didn't matter. We were able to get close enough. We danced under a crescent moon with some friends ...and the old dog. And it was FABULOUS.

If you're not familiar with Arcade Fire, this clip from a recent concert at Madison Square Garden will give you an idea of how good they are.

It's a long one, but it's all good, it's directed by the brilliant Terry Gilliam.

And the last few minutes are AMAZING...

In a country where so many people hate or fear them. Great eh?

Hey Harper. Bastard. Porker. Fascist. Here's what I have to say to you. You can wage war on us all you like. But we think you and your gross Cons are the WORST thing that ever happened to this country.

And young and old together, we will DEFEAT you...
Posted by Simon at 1:36 AM

There was no observance of International Youth Day since most Conservatives never had anything resembling a happy childhood. Therefore, to observe IYD is lost on them because most of them were born middle-aged.

Another reason is that there were more important things like scaring the nation into believing that there is a security and crime threat and a desperate law and order issue--particularly with the
arrival of a boatload of Tamils in the West.

Law and order is the bogeyman they're working with now to scare sensible people into clamoring for strong leadership and a clampdown on the recklessness that's pervading the country worse than an outbreak of dandelions in a park lawn.

Harper doesn't want to recognise youth since there are many in the pack who would eclipse him in charisma, leadership, innovation, integrity and sheer brilliance.
I said before that his youth was not happy and he shows it.
So, it's denialist Harper still pushing law and order and little else because the mainstream press and internet blogs have shot down almost anything else he has brought forward.

I don't know much about Arcade Fire except that Jon Stewart gave them a major segment on his program last Thursday. Their music may not be my choice but I do recognise musicianship. An ARCT helps in that department.

hi Torontonian...yes I don't doubt that being a Con is a mental condition caused by an unhappy childhood. However I try not to think about that because I might feel sorry for them... ;)
This law and order nonsense is so absolutely crazy it's starting to resemble a strange mixture of Kafka and Laurel and Hardy.
But using the youth of Canada as some kind of wedge issue is simply beneath contempt.
We need more rehabilitation for youthful offenders not more prison time so they can graduate as real criminals.
And as for the war on drugs it's hard to believe that this country was once ahead of the world in pushing for the decriminalization of marijuana. Once we were cool now we're just Bush league.
As for Arcade Fire...one of the amazing things about this group, in addition to the energy and musicality, is that they all play different instruments, all the instruments of Canada and even a glockenspiel. And they donate a lot of their money on a regular basis to a charity in Haiti. Add that to the fact that they come from my home town, and you have to admit they're AWESOME... ;)

They have some of the influences of Lighthouse only 40 years later.

hi Torontonian...I hadn't heard of Lighthouse I'm afraid, but I looked them up on YouTube, and quite frankly I'm SHOCKED. What were you hippies doing in 1971, and was EVERYONE on acid? :)

At that time I was getting my Masters in Economics and working for a telecoms organisation.

I have never used drugs ever in my life; others were but not me.

That also was a few years after my ARCT from the Conservatory here in Toronto.

Read the Wikipedia article and look at the list of artists who worked and performed with the group. It's a Who's Who of pop music of the 1970s.

Anyone can play the right notes but the hallmark of musicianship is playing the notes right.

Someday, I'll play some Liszt ranscriptions for you.