My Solution to the Tamil Boat People "Problem" 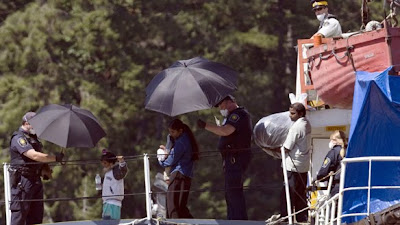 When I saw this picture of a Tamil child arriving in Canada I was both angered and moved.

Angered because of this.

“This afternoon, a vessel carrying 490 individuals claiming refugee status  including suspected human smugglers and terrorists  has entered our waters and the Canadian Government is taking action.

Some terrorists. Some threat.

Will we never learn?

And moved because I was about that child's age when I arrived in Canada. And I'll never forget looking out of the plane window and seeing Montreal and the mighty St Lawrence river for the first time.

Of course, at first I was homesick and lonely, I missed my little Scottish village and my friends. I was even a bit disappointed to discover there were no bears on Mount Royal. And that building an igloo wasn't as easy as I thought.

But later I could never thank my parents enough for bringing to this big beautiful country.So I can only hope that little kid's first sight of Canada was as wonderful as mine was.

And after reading this story.

And seeing how the Tamils in Sri Lanka are being confined in places that look like concentration camps... 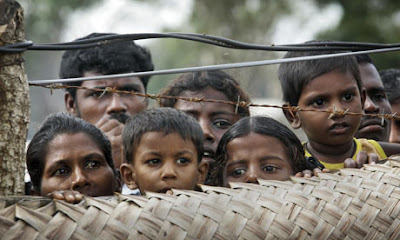 I think I've found a solution to the Tamil Boat People "problem."

Why don't we keep the Tamils and deport the Nazis to Sri Lanka? Because we need  bigot apes in this country like we need a hole in the head... or Vic Toews.

And BTW since Toews was born in Paraguay, and insists on acting like a gauleiter. 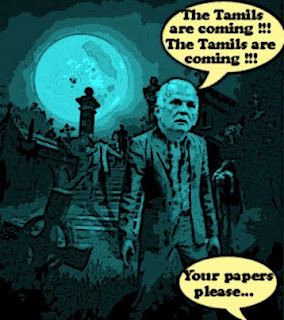 What I want to know is who the hell let him in?

As for the newcomers spending their first days in what must be a strange new land  I would just like to say this to them:

I'm sorry you've suffered so much. It must have been a hellish voyage. I know you are probably lonely and scared by all those men with guns. And you will have to be careful because there really are bears in B.C. And rabid racists all over the country.

But I know how you feel. If I could hug you all I would.

Paraguay is well rid of Vic Toews. Unfortunately, it seems we're stuck with the prick. Where'd his ancestors originate from? Maybe he should be shipped back there.

Thanks for this Simon. The only thing I've seen or read so far, even from refugee supporters, that actually says "Welcome". Well done!!

hi CanNurse...oh yeah what a crabby little people we are becoming. You'd think we were the size of Bermuda, and we had to defend every INCH of it. When in fact you could drop the entire island of Sri Lanka into the middle of Canada and it could be months before anyone discovered it.
The other thing is the Tamils are the losers in a brutal civil war. This country was built by losers, the native people, the English loyalists, the French, the Irish, the Scottish, the Jews of Europe etc etc...That's the glory of the new world it gives losers second chances. I mean I'm here eh? ;)
I know we have to have rules, and I'm sure we can do something at the other end to relieve the situation.
But getting all hot and bothered about a handful of desperate people
is absolutely ridiculous. And when it turns to racism it's totally unacceptable.
I'd rather live in a country populated by immigrants freeing persecution looking for a promised land, than live in one populated by rich immigrants looking for a good place to invest in.
It would be a better country. So yes I welcome them, and I don't care what anybody says. I tell them I'm just trying to be a better human being, and stay true to our destiny...

hi Bina...this government's attempt to make it look like we're being threatened by a boat of desperate refugees, so they can pose as our protectors is simply PATHETIC.
First it was the Russians, then the invisible criminals, now this? Gimme a break. As for Toews as an immigrant himself he should know better. But then he was born in a Mennonite colony Paraguay, I did see this movie where Dr Mengele is cloning Nazis in a colony in Brazil, and Gregory Peck had the same mustache Toews has, so I suppose ANYTHING is possible... ;)

Thank you for this article. To be honest, I thought I was reading an article about Australia. Change the words "Tamil" to Somali or Afghan. Replace Canada with Australia..and we have the same story being played out here.
We even have the leader of the Liberal (our Conservative) Party announcing that the THIRD point of their election manifesto is "STOP THE BOATS". (Election is Sat August 21).

Australia is not quite as big as Canada and we have a lot less water (and ice) but last year we accepted 300 000 immigrants (more or less). Most arrived by plane. 4916 people arrived by boat.Yet the moral panic and outrage has been about the boat people.

It has been tragic to see several of our Political Parties use Human beings as pawns in a game to win votes.

Tragic to see that this appears to be universal.

hi Martin...thanks for that information. And it's not just Canada and Australia. While researching this post I came across a U.S. study that said that while many refugees who arrived by plane were allowed to stay, most who arrived by boat were deported.

I thought this quote from the Globe and Mail story was interesting:

The primal fear of the stranger, the Other, seems edgiest when they arrive by sea.

When I was a small boy in the north of Scotland we used to pretend that boats coming up the estuary were Vikings. You know The Enemy.

Until somebody pointed out that with my red hair I was probably one of Them.

I don't know but I think there's a lesson there somewhere... ;)

I think we should let in a few million refugees a year, for example, Somalia is in much worse shape than Sri Lanka and I think
several million Somalis would be a
great addition to Canada. As well,
there are many refugees now from the flooding in Pakistan and also from the invasion of Afghanistan by the Americans. We should bring in several million refugees from those countries as they are in much worse shape than the Tamils of Sri Lanka.

hi William...come on now nobody is suggesting that we bring in millions of people.These refugee claimants are a drop in the bucket. They will be given a hearing like all the others, and if they don't qualify they will be sent back. Remember too that immigrants, however they arrive here, contribute to making this country a more interesting and RICHER place.
This country was built by desperate people seeking refuge from the days of the loyalists. And I like to think of it as a big country in more ways than just geography...

Hmmm... I don't really know any of you, but stumbled upon your blog... and felt the need to weigh in...

Immigrants, of all nature - I love them. It is what makes North America the kaleidoscope that I so love. And illegal immigrants - they play a more important role in our economy than most right-wingers would like to admit.

And it is very true Tamil people are not really first class citizens in Sri Lanka. Of course there are a few Tamils who 'rise through the cracks' and hold esteemed governmental and entrepreneurial positions. But Tamils do have to work that much harder than the Sinhalese to get there. Just like the African American people in the US - they have an African American president alright, but it doesn't mean African Americans are completely equal citizens in the US.

But, I am having a hard time understanding these Sun Sea boat load of Tamil "refugees". They supposedly paid CAD40k-50k per person for the trip. To put things in perspective an average Sri Lankan earns CAD100 (that's right just one hundred Canadian Dollars) a month. If these people paid these fees upfront, then they are better off than a starting software engineer in a US based software company in Sri Lanka; if they (or someone else in Canada) promised to pay this in the next ten years living in Canada, they are better off than postdoc in Montreal. One really has to pause and wonder, how these people were oppressed and what are they seeking refuge from, really?

Somehow I think this Sun Sea boat load of people are undermining the cause of actual Tamil refugees, not to mention the Somali, Afghan etc ones.

The asylum seekers will have to be screened, yes, many refugees have contributed to Canada, but we have let in genocide advocates from Rwanda, mass murderers from Serbia
and Nazi Germany, many drug dealers, people like Charles Kembo who murdered four people in British Columbia and was sentenced this year to life, Sikh terrorists responsible for the Air India bombing. Let the Tamils in, but make sure that they are who they say they are. I think it will be difficult to figure this out, as
how can you find unbiased evidence?
Anything against the asylum seekers will be defended as biased by their lawyers, and what hard evidence could they find? It took decades to root out the Nazis who refugeed from Europe.