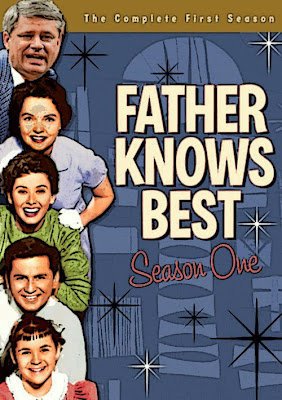 Golly. I love Lawrence Martin but I can only hope he was having a bad day when he wrote this.

Mr. Harper’s priorities bring back images of a 1950s Canada. There’s a big focus on family values, pride in the armed forces, the monarchy, the Arctic, law and order, hockey, unintrusive government, low taxes. The vision is the true north strong and free and – with respect to its supreme ruler – on bended knee.

Because he may be right about the bended knee part, but he's definitely wrong about this:

Critics say the Prime Minister is in an ideological time warp, but the time slot isn’t all that bad. The 1950s were one of the better decades.

Because from what I've read the 1950s was no golden era. Women were second class citizens, abortion was illegal, gays were criminals, people were being hanged, the country was so white you had to wear sunglasses when you went out ...whether it was sunny or not.

And things only started to change for the better when the sixties finally arrived. And drove Harper over the deep end.

In the Harper view, Canada was great until the 1960s, when Quebec, the most leftish province, took over the agenda and a series of prime ministers from that province set the country on a welfare-state course. In beholding this, the square was not a happy camper. When he came to power, he was prepared to go to extraordinary measures – treating democracy like a rat at the door – to undo the damage.

Which does make sense....if you can understand Krazy.

Lawrence must have confused it with this movie... 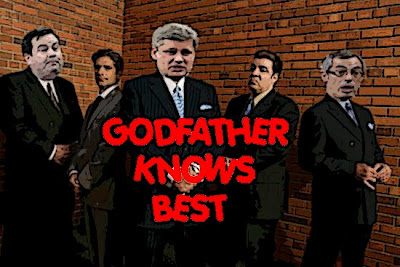 Because Harper IS a deeply disturbed control freak and the rat at the door. His grotesque Cons ARE political thugs, misogynists, racists and homophobes. They WOULD take us back to a darker time.

And the sooner we get our act together and jail them defeat them.

The SAFER this country will be...
Posted by Simon at 5:15 PM

I believe Martin was referring to the country from an economic perspective rather than social perspective.

We experienced an unprecedented post-war economic growth and immigration in great numbers-- to say nothing about the improvements in telecommunications and health care. Our economy was probably the strongest in the world in terms of
social development.

We will begin to surge ahead again once Harper is sent into exile and I`m hoping he`s gone by year`s end.

Wasn't the 50s also the time when some people had to sit at the back of the bus, eh?

If Harper had been around in the 50s, and had spent like a drunken sailor the way he had been spending in the last 4-5 years, our country would likely not have done that well economically too (if Martin was thinking of the 50s from this point of view). The Canada Council of Arts would have had its finding reduced drastically, etc.


One good thing about the 50s though. Doggies were always nice in those days: http://www.youtube.com/watch?v=2AkLE4X-bbU These days, however, one cannot be sure about doggies any more: http://ourcanadiancontent.wordpress.com/2010/08/06/pm-hands-procedural-reins-to-john-baird-the-globe-and-mail/

@Torontonian: no, Martin didn't allude to economic wherewithal anywhere in his piece, so I don't buy that argument.

The 50s are never coming back, no matter what Peevey Stevie wants. The country is far removed in so many ways. And everything Simon says here is completely on target about how awful the 50s were for those who deviated from the strict norm (white mayo on white bread please) that was that era. And Lawrence Martin knows that very well. It should be scary enough to allude to going back to that era.

hi Torontonian... I'm not trying to attack Lawrence Martin, but he did mention family values,and although what you say is true about the economic progress, and I think my Dad looks good in a Davy Crocket hat...as I never cease to remind him, ;)the fifties were also a very repressed era. There were witchhunts everywhere, and the thought that Harper wants to take us back to that era just blows my mind. Like you I hope that we will get back on track and become the progressive country we once were. But I'm afraid these Cons are
corrupting the population with their brutish wedge issues, so the sooner the better...

Hi anonymous...yes it was the time when black people rode at the back of the bus, as well as the time when the McCarthyites were blacklisting progressives all over the place.
And thanks for the YouTube link I LOVED it !! :)
And as for the attack poodle Baird, the Parliamentarian of the Year, what a great symbol of how far we have fallen...

hi Scott...You know what I find bizarre in the MSM these days is that they record Harper's crazy acts as if they were normal in a Canadian Parliamentary democracy. I'm glad to see them criticizing the Cons but it would be nice if they could draw some logical conclusions. Like these crazy ideologues have gone off the deep end, and it's time they were DEFEATED. Oh well, I live in hope because what's the alternative? :)

Wasn't the 50s also the time when some people had to sit at the back of the bus, eh?
------
Only true in the United States--not here. I should know; I lived here during that time.

I believe you missed my point altogether. I wasn't rebutting what Simon said, I was adding a different perspective to it having grown up in those years. Careful reading would have pointed that out to you
-----
I think Harper has a grudge against his Toronto years. Having to grow up in Leaside then be banished to Etobicoke for his teen years must have been a real ordeal for such a nerdy guy.

"Only true in the United States--not here. I should know; I lived here during that time" .....

Maybe, but Harper is said to be very impressed with American values so you can see the possible connection there. Red was also a dirty color in the US at that time (McCarthyism, as Simon pointed out). Isn't red/Libs a dirty color to Harper too? LOL

"The Canada Council started with the St. Laurent government and Diefenbaker did nothing to stop it."

Again, maybe. But Harper is neither Diefenbaker nor Conservative (at least not fiscally) but really Reform. If Harper had been around in the 50s, you and I would now be paying off the national debt that he would have incurred (if he had run the same deficits he is running now). Instead, we and our children and grandchildren will be paying off his national debt.

Agree with your remarks about Trudeau though. Cheers.