Is Stephen Harper Losing his Grip on Reality? 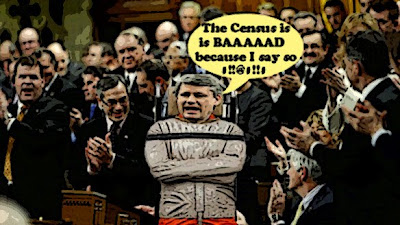 Well I must say I'm glad to see that I'm not the only one who thinks that Stephen Harper is losing his marbles.

In the past, I would not have presented these claims as facts because they're not "true," in the narrow sense of an assertion supported by logic and evidence.

But no more. "When we act," that official said, "we create our own reality." That's where I am now. Stephen Harper, the Conservative government, and me. Creating our own reality. And dropping acid with the Dead.

And what makes this even more disturbing is that Harper seems to be resisting any attempts to portray him as human. As the Con MP Patrick Brown recently discovered when he wrote this about The Boss:

The longer he is in office, the more he will ease into his own skin. Anyone who has been to 24 Sussex knows he is affectionate with his kids and he's a hockey addict like the rest of us. You see it when he's coaching his son, Ben."

Only to change his mind:

Strangely, this well-meaning attempt to compliment the prime minister, present him in a more human light, disappeared from the paper's website after it was distributed nationally. The editor reportedly got a call from Brown saying the interview "wasn't a representation of his thoughts on the PM."

(Huh? Perhaps Brown's offence was acknowledging that Harper might, just might, have a little image problem. Who knew?)

Or perhaps it's just that humans make mistakes, and Harper doesn't. Or so the voices in his head tell him.

But just think about that... the level of CONTROL. The level of FEAR. Think about what people like that could do to our country if they ever got a majority.

When Ottawa is already a Republican la-la land.

We can see where the Prime Minister is going. How he’s getting there we can glean from his ideological, authoritarian, secretive, even demagogic, methodology. He and his ministers do not want to be burdened with facts and logic in order to do what they want.

And what they want is to DESTROY Canada as we know it.

Spending lavishly on skewed priorities, from tax breaks for the rich to ordering big-ticket defence toys, has been a Republican/Conservative specialty. That’s how Brian Mulroney and Ronald Reagan turned huge surpluses into record deficits. So did Mike Harris and George W. Bush.

Harper is following in their footsteps.

Now think about this:

Hey, here's something most people don't know. Stephen Harper has a tattoo. Really. It's a quotation from Friedrich Nietzsche. "There are no facts, only interpretations." He got it one crazy weekend in Tijuana. It's on his right buttock.

And imagine how horrible it would be if it was really true.

To defend his insane decision to gut the census, Stephen Harper could be reduced to mooning the public, instead of just mooning reality.

And once his Con caucus found out about the tattoo on his buttock. 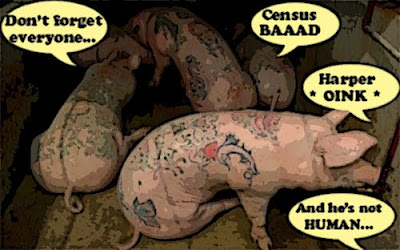 If Canadians can't see the danger maybe now they can SMELL it.

These insane klown posse porkers ARE gutting our country.

And the time has come to stick petty partisan politics where the sun don't shine.

Harper isn't losing his grip on reality. His vision for Canada is melting like a Daliesque canvas.

Every attempt to repair the damage results in further damage. Every reality becomes an unreality of Twilight Zone dimensions.

All the high flown dreams have come to nought and no amount of centralised control can stem the truth from coming out in the internet world.

Slow motion train wreck and it's all his own making. So hard to look away.

Worse is the fact that he's become a prisoner of his own "reality".

He's such a devout Christian, why hasn't God done something for him? Maybe She wasn't asked. Harper's too self-important to get humble.

It's a long fall downward for him.

hi Torontonian...I actually had quite a different post in mind looking at how Harper reacts when he doesn't get his way. It's really quite shocking...just ask Preston Manning.
But I got sidetracked by Gardner's comment about the tattoo, and the almost simultaneous discovery of a pic of tattooed pigs. I need an editor. ;)
But the point of the post is simple enough. By any standards what's happening is crazy. And the opposition should be prepared to do whatever is necessary, as soon as possible, to remove this government from power. Period.
I also know that when Harper looks like he did at that newser that whatever happens in the fall is not going to be pretty...

It is strange that politicians of all Western countries seem to be the worst representation of our societies, uanbale to defend their own countries and only dedicated to foreign or immigrant interests, isn't it? They live far away from reality.

I like a lot you comments on the Harper monster.