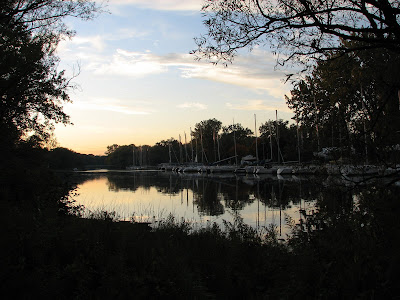 Now that the evenings are cooler and the boats will soon be out of the water. And I've run out of positive things to say about the election to try to cheer us up. Here are a few final thoughts.

As you probably know I supported the idea of strategic voting, to compensate for the divided state of the centre-left. And try to stop the Cons from slithering up the middle like a contingent of slimy eels.

And not just there but in quite a few other ridings too.

Now I can't be as angry as Canadian Cynic, because some of my best friends...actually ALL of them... are left-wing fools who would rather EAT their ballots than vote for another party. And I don't blame the Dippers for getting the distinct impression that when the , , Liberal Party said vote strategically they meant vote for THEM.

But that doesn't mean I'm not very disappointed. According to La Presse, the vote split cost the progressive side about twenty seats...which just happens to be the same number of seats the Cons gained.

But I have no regrets. I thought the movement for strategic voting was a brave attempt to make up for our divisions. And I want to thank all those who threw their hearts and souls into this non-partisan effort to save Canada from a Stephen Harper majority. The ones who put up websites like this one and this one ....and all the others. You were AWESOME. And at least we tried.

I also hope that one day it will be seen as the first faltering steps towards a united centre-left party that will crush the Cons and drive them from power FOREVER.

Which reminds me....since Great Humble Pie Leader is still beating his head against a wall because he didn't get his majority. Or wiping his ass AND his smelly armpits with the Quebec flag.

And I love all my progressive brothers and sisters ....even when they're wrong. Because I know their hearts are in the right place.

And it's Saturday night and the left-wing fools are banging on my door. And I have to decide whether to give them shit. Or go DANCE with them.

What the heck eh?

Oh why oh why do we make it so hard for ourselves?

Woohoo! First LuLu at Canadian Cynic treats me to some Motown and BILLY BRAGG and then you come up with this fantastic PET SHOP BOYS video. Thank you Simon!

"I also hope that one day it will be seen as the first faltering steps towards a united centre-left party that will crush the Cons and drive them from power FOREVER."

Rather than support a change of our voting system to one of proportional representation, you prefer that Canada stay with the archaic first past the post system?

FPTP was designed to work only with two parties and almost all modern democracies - with only three exceptions, including Canada -, moved to proportional representation during the last century.

Rather than forcing voters to choose between only two options, PR allows them as many choices as the people want. The majority of Canadians see that as far more democratic than having only two parties from which to choose, the Conservatives and "a united centre-left party."

I'm with Chris on this one Simon. Understanding big machine "party politics" means that the supposed "left of centre party" would just represent the status quo - where every few years the red shirts would just change places with the blue shirts, and nothing much would change, except the colour of the shirts, because who owns those shirts is the same "corporate company."
Thanks but no thanks!

This is election is a stinging indictment of the first-past-the-post system! Best example that comes to mind is in Gatineau where the Bloc guy was re-elected, winning only 29% of the vote. Unbelievable.

Hi Beijing York!! I'm glad you liked it. I just had to put on my party hat. After all my hopes and fears about the election, I found myself feeling really drained and depressed after it was over. Now after last night I just have a headache....:)

Hi Chrystal Ocean...actually I do support proportional representation. And I'm happy to learn that most Canadians support it too. So where is it? Right now I'm just fixated on getting the Cons out of power, and as long we have the FPTP system, a united left seems to me to be the only answer. But I'm willing to support any system that would free us from this Con tyranny of the minority...

Hi Janfromthebruce....I see what you mean too. But since I believe only the Green Party supports PR ...am I wrong?...how are we ever going to get it if the centre-left doesn't unite to get it? Because unless we get PR or unless we unite...or form coalitions like they do in other countries...the Cons will rule FOREVER...

Hi anonymous...I agree with you it's ridiculous when people can win a riding with only 29 percent of the vote. Or worse rule a country...and try to change it into something it doesn't want to be...with only 36 percent of the vote. But again as long as we have a FPTP system, and as long as we are so fragmented, it seems to me that it's only going to keep happening over and over again...