Mike Duffy and the Con Sheep 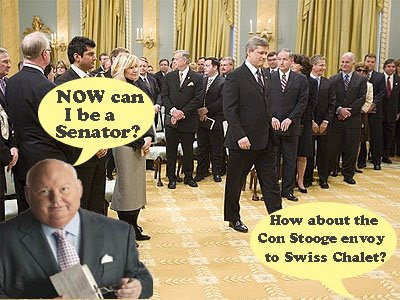 It should be clear by now that if Stephen Harper wins a majority he's going to owe a lot of chicken wings to Mike Duffy and his friends at CTV. For attacking Stephane Dion with the shameful weapon of bad journalism.

So I'm glad the Editor-in-Chief of the Toronto Star has taken them to task.

On Thursday, Liberal Leader Stéphane Dion was interviewed on CTV. His performance, seen by some as showing him in a muddle, was denounced by Prime Minister Stephen Harper as proof that Dion cannot lead on the economy.

I've reviewed the video and, in my opinion, it was not Dion who was confused, it was the CTV interviewer.

One could argue Dion should have sidestepped the fog, saying anything he liked about the economy. He might have taken a cue from vice-presidential nominee Sarah Palin, who proved adept in the U.S. debate at ignoring a question.

But Dion, remember, was champion of the Clarity Act, a law requiring any Quebec referendum on separation to pose an unambiguous question. This Liberal leader may be willing to answer questions, but he does demand questions be clear.

But of course it won't make any difference, because the damage is DONE.

Stephane Dion's campaign that was building momentum was dealt a fatal blow with the finish line in sight. Stalled in its tracks with no time to recover. Maybe it deserved to stall, but not like that.

The day it happened I thought it would backfire on the Cons. That people would see them for the bullies they are.

But I was wrong. I forgot that most Canadians don't follow elections as closely as most people in the blogosphere do. So impressions really count.

And I can't tell you how many ordinary hosers have told me they couldn't vote for Dion after seeing that clip. Because they interpreted it to mean he didn't know what he was talking about.

And others have made their views about CTV pretty clear.

Which makes me wonder what that Con network's reward will be. Will it be the destruction of the CBC?

A Senate position for Mike Duffy?

Or a dump truck full of chicken wings? For the Con stooge to gobble up.

I'm not one to bash the MSM. They are after all only as good ...or in this case as bad...as the people they serve. But this foul act of bad bully journalism deserves to be condemned.

And if it leads to a Harper majority, the contempt of a nation.

Mike looks like he wants to sell me some diabetes testing supplies.

Hi woozie...or an enema bag...where gets to demonstrate its awesome power...or his...at a test range in the Nevada desert.KABOOM !!! The clip that changed an election. The explosion that rocked the world.... :)