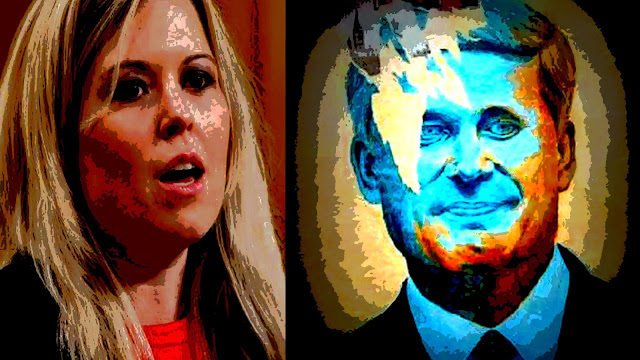 The years since her beloved sugar daddy Stephen Harper left her, have not been kind to Michelle Rempel.

Once she was a rising star, now not so much.

Once the old men in the Con media used to fall over themselves trying to impress her. Now she has to work really hard to try to impress them.

But this is both ridiculous and dangerous. 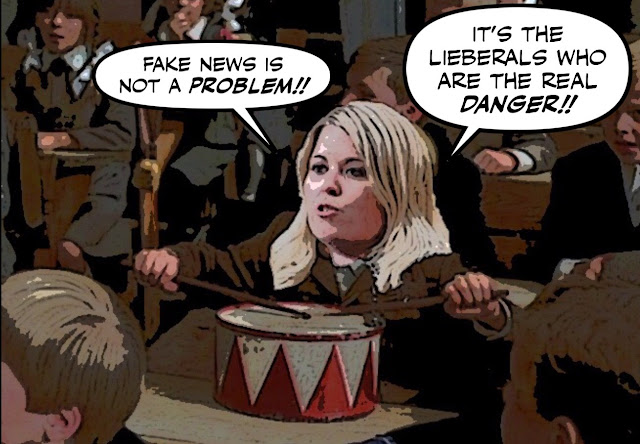 And a threat to our democracy.

Rempel is balking at the notion that the company’s head of public policy, Kevin Chan, could conceivably run an initiative that would flag faulty information on the platform, notify their users of it, and issue reports about content inaccuracies, among other functions.

Claiming that Kevin Chan is too biased to implement such a policy because he once worked for Michael Ignatieff, even though he wouldn't be doing the fact-checking, they would:

And further claiming that we don't need any fact-checkers because we can do that ourselves. 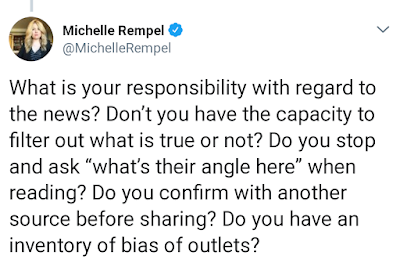 Which of course she would say, since the Cons have been flooding the internet with one lie after the other.

They are counting on so-called fake news to try to steal the next election.

And if you don't believe that just take a look at their Twitter feed.

In recent weeks, the Conservatives—and leader Andrew Scheer in particular —have been making a number of claims about the government that seem to stretch credulity. The reason, if we are to believe pundits like Andrew MacDougall (who has written about this in Maclean’s) and Rachel Curran, is to establish a narrative that Trudeau is a spendthrift who is reckless with the public purse on small items, which also would mean that he’s reckless with the big things, too.

It’s also trying to establish a narrative that the Conservatives are looking out for the cost of living for ordinary Canadians. The problem is that not all of their claims add up.

Which is so jammed with fake news, it's enough to make Putin turn green with envy.

And let's not forget that she is the last person to be talking about freedom of speech, since she blocks anyone she doesn't like from reading her Twitter feed.

But then as I was saying, this latest episode is just another desperate attempt to try to impress her new leader, the lying, failing, Andrew Scheer.

Who doesn't really like her because she's not enough of a religious fanatic, like his favourite Rachael Harder... 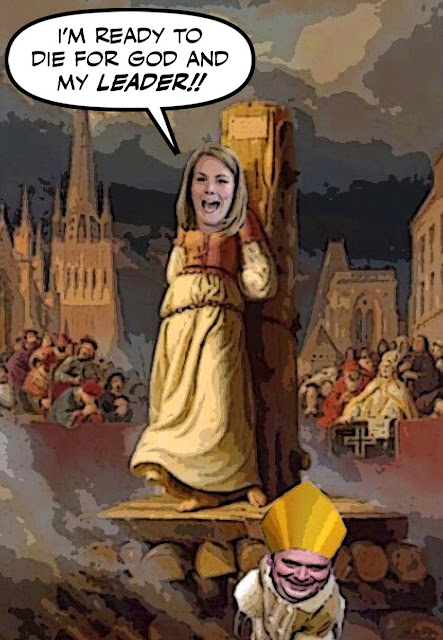 And in Scheer's view, Rempel's moral failings are only too obvious...

So much so that one can't be sure when she's ranting and raving about fake news, whether Putin is making her do it, or somebody or something else is making her lips move... 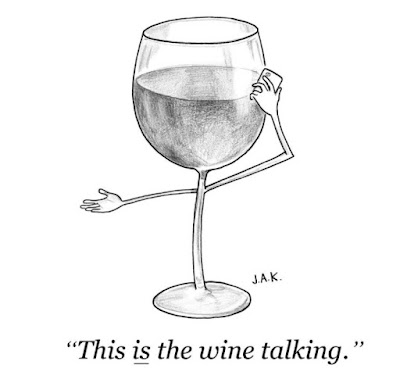 But don't worry Rempel groupies, she hates Justin Trudeau and his family so much, for who can forget the way she went after baby Hadrien for the "sins" of his father? 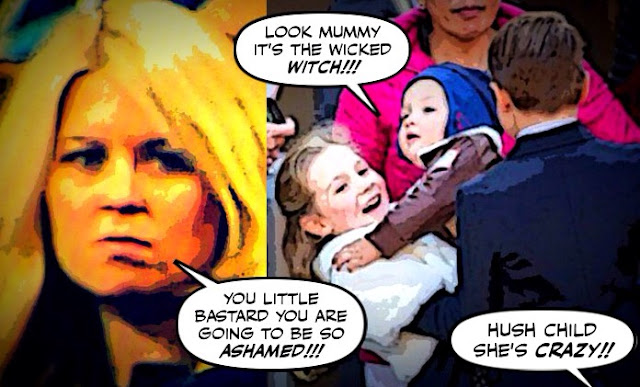 And she's so determined to make Andrew Scheer love her like Stephen Harper did.

I'm sure she's capable of ANYTHING... 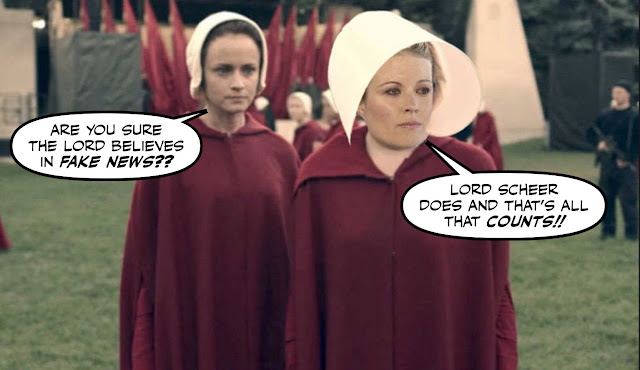 Will it work? Maybe. That is after all how the creepy religious fanatic Scheer would like all women to dress.

But one thing is for sure. By fighting attempts to control the fake news threat, Michelle Rempel is undermining our democracy, making it easier for her ghastly Cons to steal the next election.

And for that she must be shunned by all decent Canadians...

Poor me, more whine. Bad enough the Souse in the House is committing a low-rent form of Trump's attacks on the press that created a fertile environment for yesterday's mass shooting at the Maryland newspaper. But people who go after children are the absolute lowest form of scum. Now I wonder if it wasn't her frothing mob of incel wankers who harassed poor little Hadrien on Twitter over his adorable Halloween costume last year. FFS, he's FOUR YEARS OLD. As Pink Floyd might say: Hey, Rempelthinskin, leave those kids alone!

To borrow a line from Samantha Bee, what a feckless Ivanka. Lock her up.

Michelle, not well,
truth is pain and fiction's what you sell,
pas belle.

Hi Jackie...what I find so annoying is that a time when the Cons are flooding us with lies, Rempel should come along and try to convince us we don’t have a problem. She’s either very naive or like so many other Cons she’s lying like a thief. And yes, her attack on baby Hadrien was.simply unforgivable...

Hi JD...how come so many readers of this blog are so poetic these days? If these keeps up I may have to post a video of me singing and you’ll all be sorry for that. 😉
As for Rempel, I understand how you feel, she can be awfully annoying. But I still see her story as a tragedy. Once I honestly believed that she had the potential to be a better kind of Con. But now she appears to have guzzled the alt-right kool aid, and as far as I’m concerned is as bad as all the others...

Hi Simon. So which is it .. is she totally naive or lying like a thief? Suspect it is the latter as verification would completely destroy their political campaign. Ranking many of the articles as false or opinion instead of real news would be a blow, but the real threat is that they would no longer be able to fool the filtering algorithms into promoting mass distribution. Deceptive propaganda is always useful to the Cons but it only becomes powerful if it can be taken mainstream. Once an article is listed as fake ,misleading or opinion instead of news it would be almost impossible to fool the Facebook and Google filters into amplifying the message. Good bye Cons!

Apparently Rob Ford team harper won with facebook targets, and all Shrimp does in QP is provided content.

Hi Simon, That's a good question and I'm not sure why. Maybe it's our subconscious at work because as you say, her tragic story of what she could have been instead of what she's become is pitiful. A tale of woe befitting poetry as it and tragedy have told the stories throughout the ages.
However, in my case, I do apologize to the Beatles for skewering their beautiful love song, Michelle.
JD

I am not sure that even Facebook and other sites combating fake news will make much of a difference. Too often I see the right wing claiming any facts that oppose their view are "biased" or "conspiracy". Truth will not set many of them free, they will continue to slowly devolve at their own pace, absent from the concept of reality. I suspect many know they are being lied to, but the message is what they want to hear, as it not only places blame for their shortcomings on others, but gives support to attack marginalized minorities and spread hate. It seems to be the way that tribal leaders have led for millennia, and it likely won't change through small changes in social media. Labeling posts as false or as an opinion will make it easier for us to ridicule them, I doubt it will change the minds of these people, affect the bigotry that forms their soul, and may instead entrench the feeling of persecution and martyrdom some seem to have. Rather than tag just false news, they should tighten up on the hate speech, bigotry and incivility that is all to common on social media.

Fact checking is a very good idea because we know the trolls from Russia will be in fine form come election time, as will perhaps Trump trolls. Just like with Trump's statements. He was waxing on about how European countries don't pay their fair share, 2% of their GDP TOWARDS NATO. He named Spain as one of the countries. Actually Spain, in the mist of all their financial struggles is one of the countries which does pay its fair share. Fact checking is good. Not every one has time to check what is printed and not every one knows what information is out there and what isn't.

Hi JD...i’m Sure the Beatles will forgive you, even if Rempel never will. But that’s a good thing...😎

Hi anon@4:38PM...yes, i’m sure you’re right. I gave Rempel the benefit of the doubt but she doesn’t deserve it. I am afraid she has sold her soul to the alt-right thugs who are running the Con campaign. And who are like Trump and his supporters did in the U.S. planning to steal our election. Some friends of mine are investigating the Con’s internet manipulations and they assure me that sooner or later it will turn into a police investigation, so stay tuned for some dramatic developments...👮‍♂️

Hi Steve...as I said over and over again during the Ontario election campaign, the Ford campaign was the Harper campaign with Ford as the figure head leader and nothing more than that. The Harper operative Fred Delorey was apparently bragging the other day about how the Cons now control 40% of Canada, and will soon control even more when Kenney and Scheer are elected. So it’s going to get worse before it gets better...

Hi Filcher...I hope you’re wrong, but i’m afraid that judging by what’s happening in the U.S you could be right. Trump’s fanatics refuse to accept that their Great Leader could be wrong about anything. And the more Trump is criticized the more they support him. I can only hope that the Canadian difference will help us, and that we can use social media to motivate every decent Canadian to get out and vote. It will be the challenge of a life time, but at least we will be able to point at Trumpland and ask Canadians do you really want THAT?

I can't stand her and she deserves obscurity.

One quibble - I strongly disagree for attacking her on the basis of liking wine - and perhaps having a drinking problem. It reminds me of the Cons' attacks on "doper" Justin Trudeau. Why is it anybody's business unless she has proven unfit for duties (not talking about her vile world outlook) or is a danger to others as in DWI. We have no more business in the dining rooms of the nation than in their bedrooms.

if she wants to drink, fine, just don't tweet while drinking.

Oh, that goes for everyone, though Trump is famously teetotal and that doesn't prevent him from making utterly idiotic twitter comments!