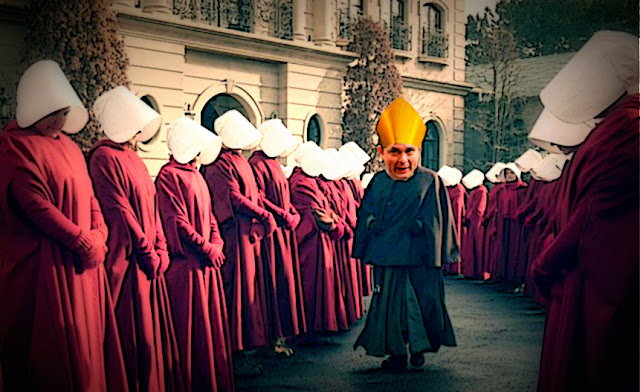 If Andrew Scheer had a fantasy university it would almost certainly be a nightmare version of Trinity Western University.

For it has a so-called covenant that blatantly discriminates against LGBT students.

And he is a religious fanatic and ghastly homophobe who chooses to treat gay Canadians as if they didn't exist.

As did his Great Fallen Leader Stephen Harper who used to recruit many of his parliamentary interns from that hideous university. 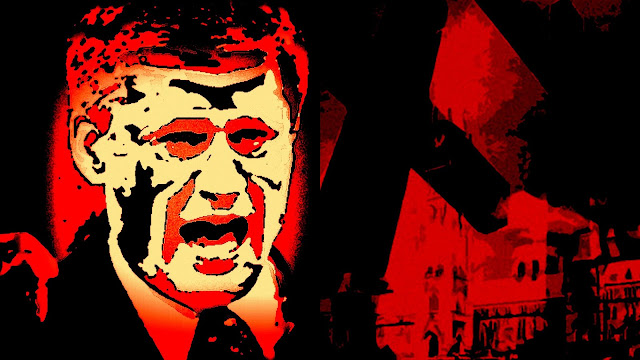 As he worked to stealthily turn Canada into a quasi theocracy.

But as we all know Justin Trudeau put an end to that, and today the Supreme Court gave Trinity Western a well deserved judicial spanking.

A B.C. Christian university has lost its legal battle over accreditation for a planned new law school, with a Supreme Court of Canada ruling today saying it's "proportionate and reasonable" to limit religious rights in order to ensure open access for LGBT students.

In a pair of 7-2 rulings, the majority of justices found the law societies of British Columbia and Ontario have the power to refuse accreditation based on Trinity Western University's so-called community covenant.

And all I can say is hallelujah, it's about time.

For those religious bigots can scream that their rights are being violated as they always do... 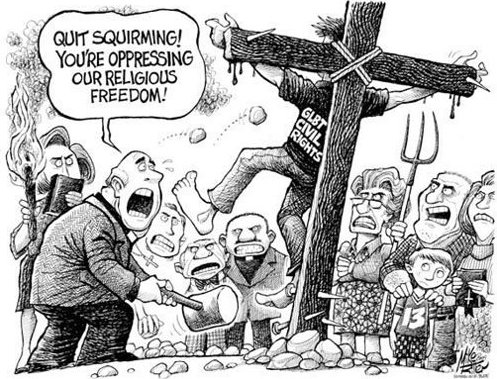 But as Michael Coren points out, they're not exactly model Christians.

The legal issues aside, there is reason to question the allegedly religious underpinning of all this. Jesus never actually speaks of homosexuality, which was certainly well known and often discussed in 1st century Palestine. He is revolutionary in his concept of acceptance and love, and when he is presented with sexual “sin” – the story of the woman caught in adultery – his disdain is for the accusing hypocrites rather than the object of their anger.

The reality is that those people who wanted to qualify as lawyers at TWU will find alternative arrangements and that there will still be lawyers who oppose LGBTQ equality. But a reminder has been sent that harmful discrimination is unacceptable, even if tenuously framed in theological language. And that’s rather godly.

And I'm just glad that we have a Supreme Court that stands up for our precious Canadian values, and has once again made clear that human rights trump religious rights every day of the year.

And since the two judges who dissented from today's ruling were the last two justices appointed by Stephen Harper, there is another lesson for all of us.

Don't ever let a religious fanatic like Andrew Scheer become Prime Minister, and in a position to appoint Supreme Court judges. 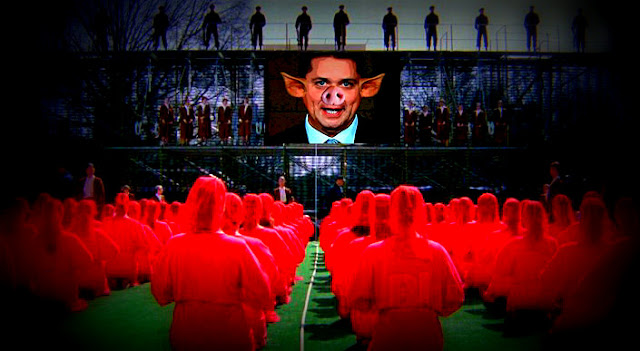 For he will appoint one bigot after the other.

And we will end up in a country we don't recognize.

And in a hell of our own making...

We could use a little of that Canadian values system imposed upon the regressive right-wing bigots south of the 49th. Even Alberta is sprouting rainbows in one of the First Nations communities. That's got to make Kenney have a diva fit.

And good on that columnist for unpacking the bogus theological arguments used to justify bigotry. Something that appears beyond reproach in the U.S., where even the "free press" has to tread lightly lest they trigger the "persecution complex" among uptight haters who shriek at the sound of facts.

I don't think Jesus would mind playing bartender at anyone's wedding or baking a cake. He might have grounds for a libel suit against those who claim he would.

Harper decided to undermine the best high court in the world. Beverly chased him back to obscurity.

In 1975 the special, LBGTQ sexual orientation human rights, were granted as a result of crime.
At the time of 'winning special rights for sexual orientation', a person was not allowed to be a practicing member of the psychiatric profession and be a homosexual.
It was illegal, but due to criminal collusion, criminal conspiracy and fraud, the laws were changed.
"Before that time, all lesbians and gays were considered sick—pathologic."
"81 Words"
"Spitzer was astounded to find standing at the bar several heads of university psychiatry departments, well known researchers, and the man in charge of dispensing federal grants to psychiatric training programs. All were closeted gay men"

The whole process was illegal.

In the seventies, homosexuality was made legal, by criminal means.
Before that time all homosexuals were considered sick, pathologic.
During the process, the vote to make homosexuality legal, there existed a group of Psychiatric doctors who were illegally practicing medicine.
The laws at the time disallowed homosexuals to be Psychiatrista, it was simply illegal.
These doctors criminally conspired, colluded and committed fraud, collecting monies they were not legally allowed and treated patients illegally.
They corrupted and usurped our laws to have themselves declared 'normal'.

When the laws were being bandied about, one argument against the legalizaton of homosexuality was, 'they'll flock to Boy Scouts, daycares and schools'.

Now a mere fifty years later, what do we have?
The Girl Scout board of directors is three quarters lesbian and we have what is known as the 'Rainbow Curriculum' and your children being taken away by law if you refuse to recognize homosexulaity as 'normal'.

We need a referendum with every citizen having a vote whether they believe homosexuality is normal or a medical disability, hormone misadventure, which is already covered by disability discrimination laws.

As it has been pointed out before. Places like Trinity and Mosque schools run by the Taliban are eerily similar. The sad sad fact is if this case had been decided by the US Supreme Court Canada would be one step closer to an Atwood dystopian.

Totally agree, we should also have a referendum on gravity at the same time.

Do we also have referendums on whether the Easter Bunny is real or the Moon is made from green cheese? Sorry but no, laws aren't made on beliefs devoid of fact. We have a constitution in Canada and there's no point in spending wads of taxpayers money on something which will be struck down in the Supreme Court of Canada. Which is a good thing.

Excellent idea! Who needs medical experts when we can poll know-nothings? And to what end? As you point out, it makes no difference since we already protect people with disabilities from discrimination and allow them to marry.

As Mencken once said, religion is the greatest fomenter of hatred the world has ever known. A Christian can graduate from any law school in Canada, but graduating from an institution that promotes discrimination undermines the notion of equality and shouldn’t be accepted.

Here Hear, In the USA Liberty University is filling up the Capitol. Good case for political ex lax.

Who cares? I am an old man. I dont care if someone wears a funny hat
or sleeps in the way they choose. It really should be a non issue at this time. We have way bigger fish to fry than how people make themselves happy in private, or appear in public.

Mencken nailed everything, sadly forgotten. And History repeats itself.
I would love to see JT just launch with that.,

I'm incredibly happy with the Supreme Court decision. I wasn't happy when the university was opened because of its closed mind. It is based in the Lower Mainland's bible belt, you know where they go to church on sunday but don't care about ethics on Monday. where they protest abortion but won't lift a finger to help parents with young children who need housing or food. You really need to wonder about those christens.

By not having a law school at that university some of the students will still go on to become lawyers, however, they will be exposed to other opinions and out looks and it may temper their opinions on various subjects. It will reduce the number who become lawyers and thus the chances of them becoming Supreme Court justices. We see what happens when politics and religion become one in Saudi Arabia, Iran (not as bad as it used to be) Russia, Israel, the U.S.A.

The courts need to be open. If law schools start producing lawyers who have a value system not consistent with keeping religion out of our courts we will be in trouble. Lawyers who have been trained in secular schools, in my opinion do a better job. We have only to look at lawyers who take on cases which they personally abhore, but if the justice system is going to work for all, we need it to have an open mind. Lets not start by training lawyers in a religious university. Don't even think they ought to be training teachers.

Hi Jackie...anti-gay bigotry like all other bigotry makes absolutely no sense and is the product of diseased minds. To make matters worse, many anti-gay bigots are intact gay themselves, and are trying to repress themselves which makes tham even more pathetic.
But the good news is that most of them are old, so their bigotry will soon be buried with them. And the new generation, which is massively progressive when it comes to gay rights, will help build a better world...

hi rumleyfips...I will never forget how during the darkest days of the Harper regime, the Supreme Court stood up to the beast to defend our precious Canadian values. I hope that a hundred years from now we remember what that court did, and honour it an its Chief Justice accordingly...

Hi ironjustice...What bigoted nonsense. You don’t hold referendums on the human rights of minorities. Gay people have always been here, and they always will be, and you should cease your tortured musings and get with it. And remember, it’s never too late to come out!! 🌈

Hi Steve...There are reasons I’m an atheist. I recognize there are good religious people, but far too many are not, and are only maintaining the views of the patriarchy, at a time when the world needs those values like a hole in the head...

Hi anon@1:41 PM...As I said above, there are many good religious people, and some of them are my best friends, those who work with the poor and the sick. But unfortunately just a quick glance at the world we live in make what Mencken said even more true than it was in his day...