Why Andrew Scheer Hates Justin Trudeau So Much 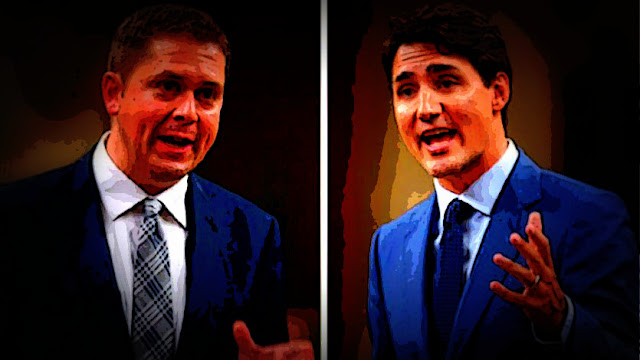 Like many Canadians I have long wondered why Andrew Scheer hates Justin Trudeau so much.

For hate him he does, with a passion that far exceeds what we might expect from an opposition leader in Canada, and borders on the maniacal.

I have tried to find out whether there is anything in Scheer's past that could help explain his disturbing behaviour. But that wasn't easy, because no politician has tried to bury the past as much as he has.

But now at last I think I have found it. 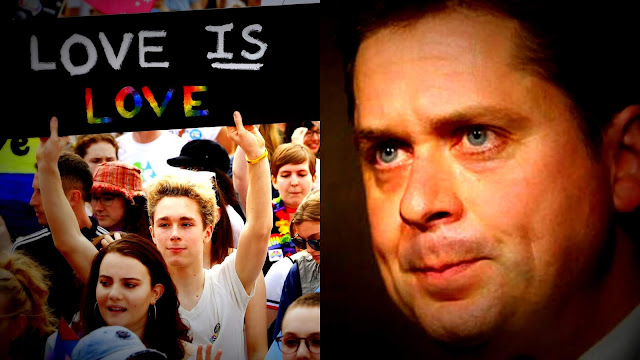 A speech on same-sex marriage delivered thirteen years ago, that in my mind at least, explains everything.

For while much of it is the kind of hateful nonsense that we might expect from a religious fanatic.

His foamy contempt for LGBT Canadians cannot be concealed. You can feel the hate oozing out of every sweaty orifice.

And his refusal to accept that marriage is a measure of equality, a human right, and a Charter issue, make him unfit to be the leader of any Canadian party let alone Prime Minister.

But it does explain why every time Justin Trudeau tweets his support for gay rights...


Scheer, who couldn't bring himself to even acknowledge Pride Month, feels driven to fire off tweets like this one:

For even though it's just another big lie, just another smear. And his claim that the Cons always defend human rights couldn't be more farcical.

He hates Trudeau so much he just can't help himself. Or control himself... 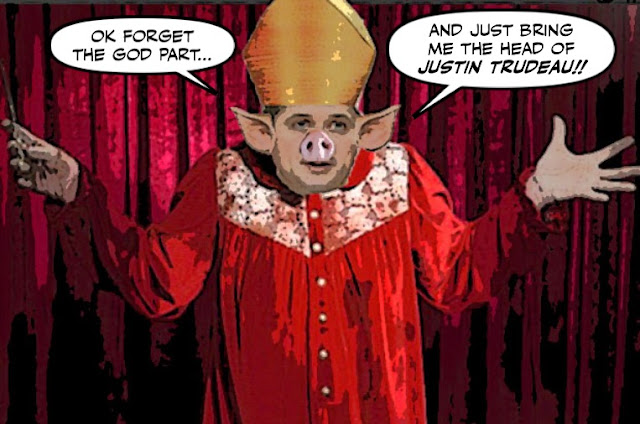 And yes, as I said, we need a leader like that one like we need a hole in the head.

Andrew Scheer is a creepy religious fanatic, a miserable misogynist, a vicious homophobe, a racist, and an alt-right sympathizer.

He's a man who would take us to a very dark place... 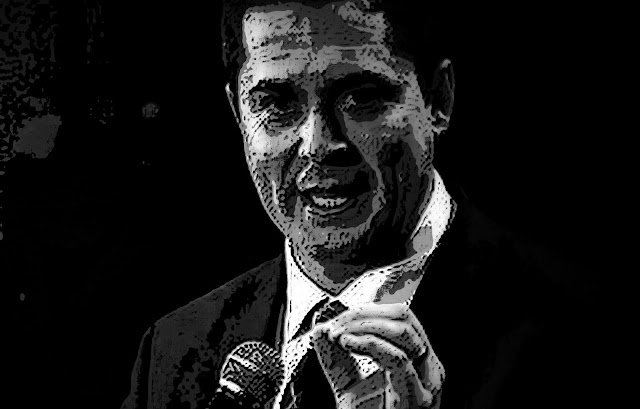 He can't be defeated soon enough....

.. sometimes 'politics' gets all mixed up & tangled
and you have factions or governance
meet challenging issues of society and culture

.. think in terms of a teeter totter
such a simple children's playground toy
What does it take though for it to be utilized ?
Why.. two similar size children..
or two tykes and one large toddler
or two who will adjust their position..
or an adult on one end.. who knows the ropes

We have Andrew Scheer as the toddler
standing there, back to the teeter totter
and fuming or crying weeping..
foot stomping - tantrum time
and an adult sitting there calmly on one end

Let's face it.. Scheer cannot back down now
he is not getting back on the teeter totter
It seems better to cling to the infantile
'its not fair!' or whatever

That's the mechanics of this as analogy..
Scheer is so hard done by at Stornoway..
Chauffeur, chef, free rent, staff, briefings
Lazyboy media everywhere
to make his utterances public

And a partisan war room
to inform him what to say & when
He's Jason Kenney, but chirping on a bigger stage
when Trudeau is going end to end
on the international stages.. under the big lights

As a gay guy that speech by Scheer sent a shiver down my spine, for I can only imagine what that religious Fascist might do if he ever became Prime Minister. But the sad thing is that most straight Canadians, especially the older ones, wouldn’t see anything wrong with what Scheer said. And that’s because most of them think just like he does. LGBTQ people in this country won’t be truly free until the older generation is dead and buried.

Don't be so quick to dismiss older Canadians, quite a few of them are gay like you. And we've still got enough fight in us to be able to handle Scheer with one hand behind our backs. Also, when about a million people turn out to watch Toronto's Pride parade, and many if not most of them are straight, we're all not doing too badly.

would suggest that Scheer has let his religious views over take his political ambitions. Harper's views on most of these subjects weren't that different from Scheer's, he was just quieter about them. Harper also had John Baird in Cabinet so going all out would not have been a good thing.

Scheer has always struck me as a petty man and an abuser of his power, as we saw while he was the Speaker of the House. This is simply another e.g. of it. Its not anything against Trudeau, per se, its just they way Scheer is. If some one else was the P.M. he would be doing the same thing.

Hi salamander...I'm still not quite sure what to make of Scheer, and according to the polls many other Canadians don't either. More than a year after he became Con leader people still don't know who he is, and what he stands for. So his rise and now fall in the polls is determined more by how people feel about Trudeau, than how they feel about him. But his past is a problem, and the way he is trying to use racism in Quebec for crass political purposes should concern everyone. For the migrant issue is becoming an issue that is bringing down governments all over the world, and a man like Scheer who can do the nastiest things with a smile on his face is still a real threat...

Hi anon@6:16PM...I know where you are coming from, and I don't blame many LGBT people for thinking that way. But one shouldn't generalize about generations since there are good and bad people of all ages. I agree that the situation can only improve as the new generation takes over since they are not burdened by the prejudice of the past. But right now we have to work to unite young and old in the battle to defeat the right...

Hi e.a.f...I now believe that Harper chose Scheer to be Speaker because of his extreme religious views. Harper belongs, or used to belong, to a particularly aggressive missionary church. And Scheer the son of a church deacon belongs in the same political congregation. But while Harper hated Trudeau for being the son of Pierre , I believe that Scheer's rabid hatred of Justin is motivated mostly by his support for the rights of women and gay Canadians...

hi anon@10:26PM...Well said daddy ;) When about a million people turn out to watch a parade, in the rain, we're not doing too badly and we have come a long way...

You know what they say about the most rabid of homophobes: they're most likely self-loathing closet cases themselves. Science actually proves this. But the likelihood that Scheer has daddy issues from growing up in an ultra-conservative religious household where he might have been made to feel "inferior" for whatever inclinations he may have, doesn't make me feel any sympathy whatsoever for bigots like him, Kenney or Pence. Or Ezra Levant, for that matter, who doesn't do a very good job of hiding his obsession with Justin ("Shiny Pony" anyone?) and in fact comes across as a campy Batman villain the way he grandstands and fixates upon destroying the one thing he know he can't have. You're judged by your actions, and the content of your character. Like anti-feminist women and Log Cabin Republicans, there's plenty of token minorities siding with the enemy because they feel they derive some selfish benefit in some way.

I don't care if Trudeau swings both ways or not. Maybe Andy the altar boy has the hots for him and it's driving him nuts. (Hey, I'm just asking the questions. People are talking about it. It would be irresponsible not to speculate.) But to paraphrase Papa Pierre, the media should have no business in matters of the bedroom. Everything with right-wingers is projection anyway; in this case, it's more like an IMAX theater showing movies on the surface of the moon. The mouth-breathing trolls who follow Rebel Media and the Crapper candidates' social media pages, and who write about all the things they just KNOW beyond any reasonable doubt and would swear upon their Bibles as fact that Justin absolutely does with Obama, Macron, Prince Harry, Mayor Khan of London, or any number of burly, handsome Syrian refugees, and his supposedly overwhelming desire to get spanked with a rolled-up copy of Rolling Stone or G.Q. by Donald Trump... yeah, obviously they're just writing fan fiction, but are too stupid or blinded by their dissociative hate-crush to tell fantasy from reality.

And they say liberals can't meme. Conservatives suck at art because they think bedtime stories are news articles. (No wonder they elected a reality-show "president" who came from a pro-wrestling career and really only plays a billionaire on TV.) At least when liberals come up with this stuff... we know it's all in fun. 😊

Scheer must be schitting himself. The Vatican used the acronym "LGBT" in an official document for the first time. Or maybe he, like "Sloppy" Steve Bannon and members of the Italian fascist government, are sedevacantists who think Pope Francis is a no-good, illegitimate, left-wing commie usurper who has the temerity to, oh, I dunno, love the stranger and promote acceptance of and compassion towards human beings different from yourself?

Gee, I wonder where the pope might have gotten that idea? Trudeau shills paid for with George Soros' money, and the "fake news" biased liberal propaganda, no doubt... Perhaps Andy and the other repressed/incel fascists need to be reminded of a different set of acronyms: RTFM and STFU.

Simon, I heartily agree. One of my best friends was among the founders of le Front de libération homosexuel in the late 1960s. He was from a rural area and his dad kicked him out of the house for being gay. He hadn't even had any sexual relations with either boys or girls, but he just wasn't stereotypically "masculine" enough. I'm not gay, but I'm honoured to have met several veteran leaders of gay and lesbian movements.