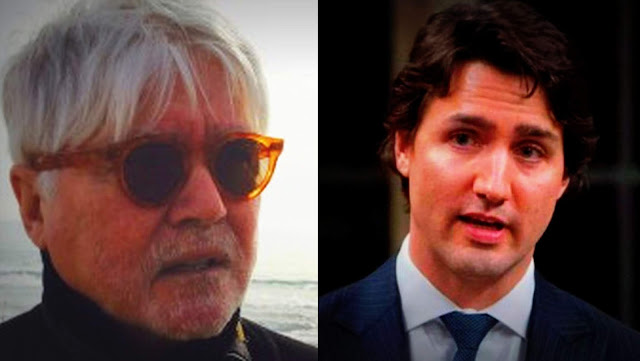 For months Michael Harris has been looking for any excuse to attack Justin Trudeau, blaming him for just about everything.

From his failure to disarm Saudi Arabia to the state of the weather. 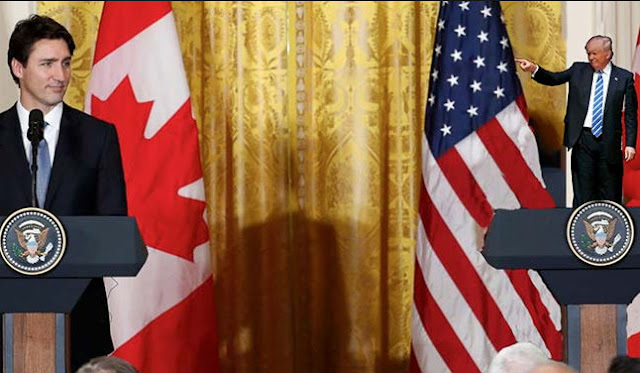 Now he's praising him for having the courage to stand up to Donald Trump.

The Trudeau government is the first one in the Western world to bluntly call Trump out for his fabrications and fractiousness. Instead of kissing the royal arse of this clown prince, the rest of the world would do well to follow Canada’s lead and start pushing back against the threats, lies and institutional nihilism of this most dangerous head of state.

And suggesting that what Trudeau is doing should serve as an example to all those cowardly Republicans who don't dare challenge their ghastly leader.

All of those chicken-little Republicans who hate Trump but don’t have the cojones (that’s Mexican for balls) to stand up to him lest it cost them at the polls, should take heart from a real exercise of democracy in Canada. Trudeau, who was slipping in the polls, has suddenly never been more popular since he decided to tell Herr Trump that Canada is not about to put up with his crap.

And Harris is probably right when he says that Trudeau has never been more popular.

Since some polls are already suggesting that he is already enjoying a strong Trump bump. 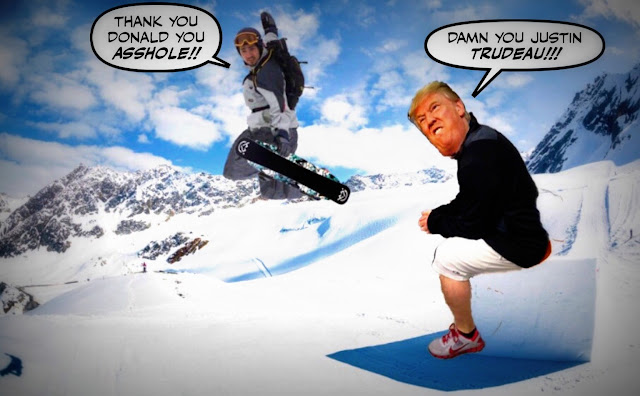 Surveys conducted by the Angus Reid Institute before, during and after the G7 summit in Charlevoix, Que. suggest Canadians have strong support for Trudeau, with 62 per cent saying he handled the fallout with Trump well.

Trudeau’s overall approval is up to 52 per cent, which indicates a 12-point increase since Angus Reid last asked the question in March. It’s his highest rating since he won the 2015 election.

And I can only imagine how Andrew Scheer must be feeling... 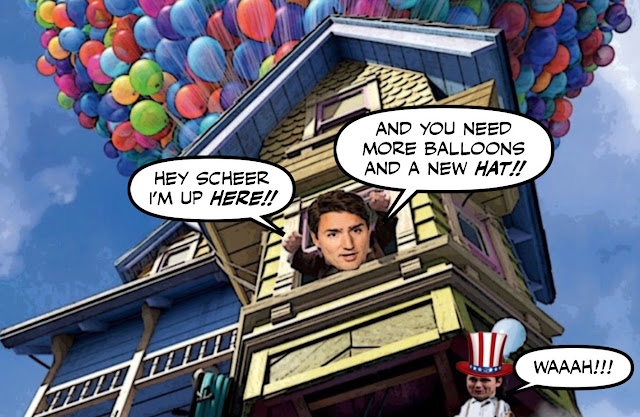 But then at a time when his country needed him he chose to stab it in the back for crass partisan reasons.

So he deserves what he's got coming.

And in these dangerous times we need and deserve a real leader... 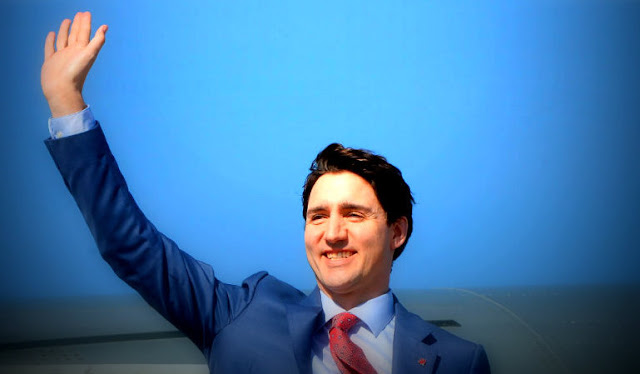 Excellent post, Simon. And what a difference a G7 can make...

Trudeau's leadership qualities are not only reflected in his personal stature, but in who he assembled for his cabinet and the fact that he is a team player in the first place. Chrystia Freeland perhaps the most notable as of this juncture with the looming Trump crisis. She would not rule out the possibility of sanctioning Trump's corrupt business empire under Canada's version of the Magnitsky law -- this after the NY AG just sued Trump's fraudulent "charity" for dealing to himself and who knows who else.

Even Patrick Brazeau is speaking favorably of him, saying "don't underestimate this guy -- I had to learn the hard way"

Scheer is nothing but an egotistical brat and a craven coward who puts his personal vendettas, regressive agenda and impatient lust for power ahead of what's best for his country. He would only give a mealy-mouthed, boilerplate statement that "Canada's industry needs to be protected" but would not set his dislike of Trudeau aside to say "we need to stand with the prime minister." I don't think he can even stand to look at Trudeau. He's such a disgusting coward who is just like Trump: he despises everything Trudeau is, which he knows he will never be.

And hopefully the majority of Canadians themselves will continue to do so for many more years to come.

All Scheer's dirty smear campaigns have gone for nothing, Trudeau's decency has melted the wicked witch of Saskatchewan. Expect the Cons to play dirty because now they're desperate.

I really like Freeland. She was a regular on the McLaughlin Group years ago. Her anti Russian bias is the only downside. In Ukraine we are on the wrong side of history.

What I’m enjoying is the silence of the Con media and other Trudeau haters. They have always portrayed Justin as weak, even though he’s the only Prime Minister to have flattened another guy in a boxing ring, and now they don’t know what to say. Screw those cowardly Con bastards.

Scheer isn't going to this lying down. He has now sent a letter to Trudeau on some other subject. Guess he needs to keep his name in the news some how.

Trudeau and Freeland are making a good pair as they represent our country in the trade negotiations and other important issues. Freeland, is measured and thoughtful in her responses and is doing a good job.

Hi anon...thank you, I enjoyed writing it. Although I didn’t vote for Justin in the last election, I have been impressed by his courage and his decency, and disgusted by the way the Cons and our shabby media have attacked him. So I’m glad we have him to take on the beast Trump rather than a traitor like Andrew Scheer...

Hi Jackie...you are quite right, Justin Trudeau has assembled quite a team, and Chrystia Freeland has done an amazing job of defending this country. We are so lucky to have them instead of Scheer and his Con traitors who would sellout this country at a drop of a hat. Scheer is a loathsome creature and one can only hope that he will no longer be with us after the next election, for his name with live in infamy...

Hi anon @10:10 AM...The Cons are already playing dirty, or should I say dirtier. Scheer is now stirring up racism in Quebec for crass political reasons. His desperation is showing and one can only hope that he will drown in his own excrement....

Hi anon@10:52 PM...yes, the toxic Trudeau haters have been rather quiet haven’t they? They don’t dare raise their ugly voices lest they look like traitors. I think I should go after them, pour a little boiling water in their hidey holes, and watch them jump. They must be suffering terribly, but a little more is only what they deserve...😺

I’d like to see that a lot. Those old Trudeau haters need to be taught a lesson since you can be sure they are all cheering for Trump. Poke a stick into their hidey holes Simon and see how high they can jump.

I'm good with that. Now if we could only get Trump or one of his suregets in to the ring. Hey it will be for charity, you know, help for the traumatised children in the concentrations camps in Texas.

Yeah, because everyone who criticizes the PM is a Trump supporter. Liberals are so stupid it's not even funny.

Utterly hilarious that a government that came to power promising real change and transparency and has been anything but along with supporters who squeal like teens over Justin Bieber at the very thought get totally offended when media does the job we expect of them.