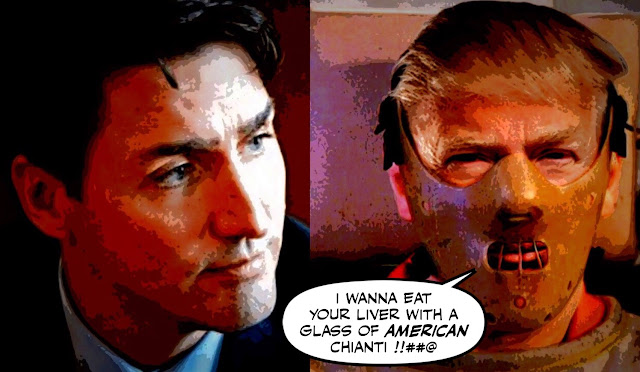 As we all know, relations between Justin Trudeau and the madman in the White House have been going from bad to worse.

With Donald Trump doing all he can to try to intimidate Trudeau, and force him and Canada to surrender to his insane demands.

And now it seems he has a new, and he hopes deadly weapon, to use against us. 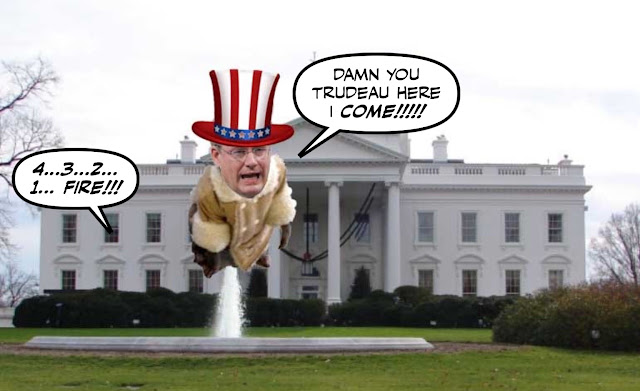 Former prime minister Stephen Harper is planning a trip to the White House next week, and hasn’t notified the current Canadian government of his visit, CTV News has learned.

According to emails obtained by CTV News, American officials are expecting Harper to visit D.C. on July 2, the day after Canada’s retaliatory tariffs on imports of U.S. goods and American-made steel and aluminum are set to come into effect.

That with Harper's help he can use to blindside our Prime Minister.

In planning his visit, the former prime minister has effectively blindsided the current Canadian government, bucking convention by not notifying Prime Minister Justin Trudeau or his office about the visit. Harper also did not reach out to the Canadian embassy in D.C., Global Affairs Canada, or the Privy Council Office.

On the day after Canada fires back at the Trump regime, by imposing our tariffs on them, and the world looks to our Prime Minister to speak for all of us, and tell the raging bully we're not afraid, and we'll never surrender.

There will be the bully Harper stealing the spotlight, by yapping away at the White House with his old buddy John Bolton.

Who many believe is as crazy, and even more dangerous than Trump himself... 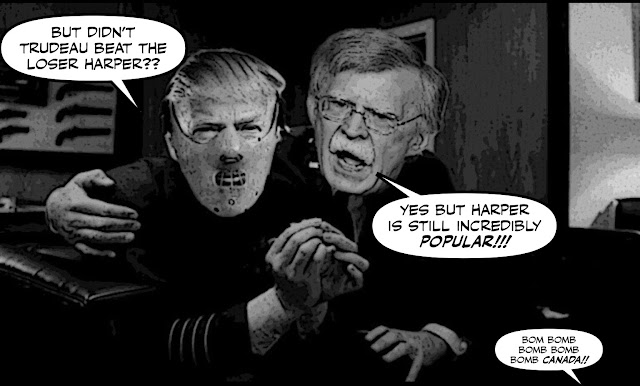 And no doubt scheduled the meeting, for maximum effect.

With Harper seizing the occasion to try to diminish Trudeau from beyond the grave, and announce he's BAAAAAACK!!! 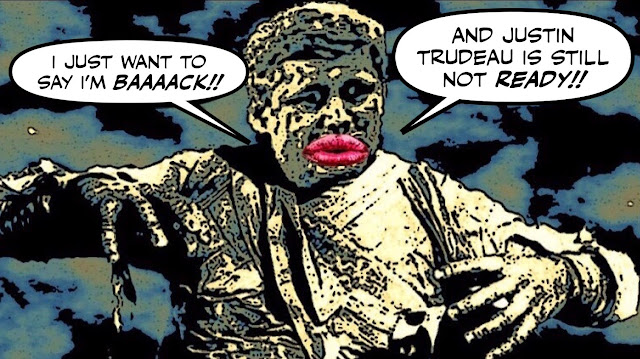 Just like Trump is always trying to diminish Trudeau, and Canada.

“Canada. You know, Canada: nice guy, nice guy,” he said, extending his arms in a kind of conciliatory gesture. “Prime minister. Justin. I said, ‘Justin, what’s your problem, Justin?’ So: Canada. O Canada. I love their national anthem. O Canada. I like ours better, however. So. No, Canada’s great, I love Canada.”

But sadly for Harper and Trump, attacking Trudeau in such a manner is almost certainly not not going to work.

And not just because it looks too much like what Andrew Scheer has been doing... 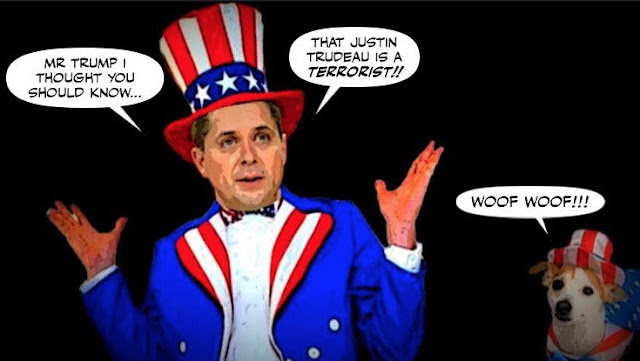 Which borders on treason.

But also because as Scheer now knows, and Stephen Harper found out the hard away, the more you attack Justin the more popular he becomes.

The latest Nanos federal ballot tracking has the Liberals at 36.7 per cent support, followed by the Conservatives at 32.0 per cent, the NDP at 20.6 percent, the BQ at 3.6 per cent and the Greens at 5.7 per cent.

And the more diminished his enemies look... 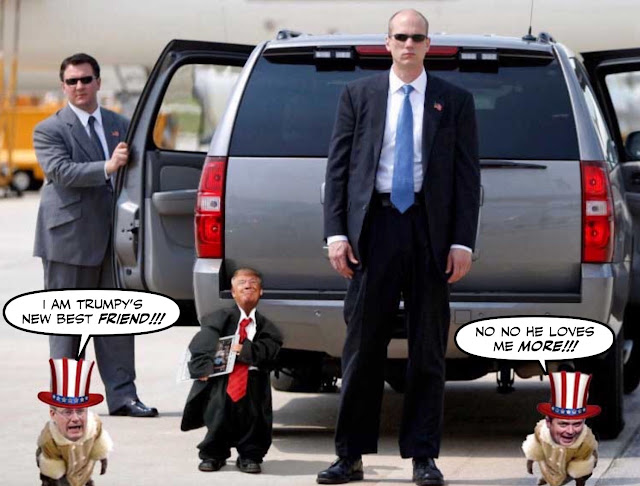 Look, I understand that Harper is desperate to sell a few more copies of his very boring book. And that Scheer is just desperate.

But aren't they pathetic?

Take a note of what they are doing, so we can remember them at election time.

And make sure those treasonous Cons never govern this country again...

Trump's fat a$$ is just waiting for the Harper missile. I'm sure Bibi's already put in a good word for him.

Wow, he really does have nine lives, doesn't he. I can just see it now: Ernst Stevero Blowhard brings one of his feline companions along and Donald tries to, um, grab it. Only to get sprung upon like the eagle that almost ripped his tiny hand off. This litterbox reeks of backstabbing and raw desperation on the cons' part. Anybody know if Hairball Führer is doing "consulting work" for Putin's goons? I know he's cozying up to such peripheral thugs as Viktor Orbán, so it wouldn't surprise me in the least if he and Donald share some of the same, er, "friends."

Simon, do you know the song "Stray Cat Strut" that was a hit in the '70s? Reminds me a bit of Harper if you tweak the lyrics a bit:

Stephen Harper, stray cat
Struttin' down the aisle,
Lickin' his chops
With a Cheshire Cat smile,
Sharpening his claws
And arching his back,
He hides in the alley
For a stealth attack.

Scumbag Steve!
He's the comeback guy!
With a Vader death grip
And an evil eye!
Plotting world destruction
From his Bond villain lair,
He's got a gold litterbox
Like a New York billionaire...

He don't bother
Chasing varmints down,
The rats can play,
He really don't care!
He only wants that rodent
With the pretty-boy hair...

He shouts, "Bring me the head
Of Pierre's own boy!
He ain't worth nuthin'
But a catnip toy!
A fish in a bowl
On top of the shelf,
And he looks mighty tasty --
I want him for myself."

But if you ever watch the old cartoons... it's the mouse who wins every time. (And Boris always got outwitted by the moose.)

The media has reported that the PMO was blindsided by Harper’s Plan to meet in the White House with a high level Trump advisor.
The question that doesn’t seem to have been asked is whether Scheer knew about the planned meeting. I’m guessing, he sure did. And that makes it a plot.

I agree, Scheer must have known,, and it is a plot. But as Simon said it’s not going to work. Harper doesn’t understand how much so many Canadians still hate him, so this sleazy attempt to undermine Justin Trudeau will blow up in his and Scheer’s faces.

Harper's round face and little smirk just before his Gotcha moments are reminiscent of the Cheshire cat in Wonderland. Perhaps more fitting is Elmer Fudd in Looney Tunes, a good foot soldier always just one step behind the wascally wabbit. He sure did a 180 on the Putin hate turned to love relationship now that Putin and Netty are buds. The only consistency is his penchant for trying to Kill the Wabbit.
RT

Given the secrecy of this meeting and subsequent no comments from the Harper clan, it is clearly an attempt to undermine JT. However, in this case, he's undermining all Canadians and that is treason at the highest level.
Don't believe for a moment that he's meeting with Wilford Brimley to discuss how they stay regular, Benedict Harper is stabbing JT and all of Canada in the back in this despicable act of treachery.
If I were JT I'd have Harper arrested upon his return, charge him with treason, revoke his citizenship and "lock him up, lock him up, lock him up"!
JD

hi UU...yes, and for those who don't speak Spanish let me provide this handy list of dictionary definitions so readers can choose the one they thinks best applies:

hi anon@12:51...yes I'm sure Netanyahu has put in a good word for him, and so has the right-wing billionaire Sheldon Adelson. But the only reason they'd let him into the White House is to try to undermine Justin Trudeau. Good luck with that one...

Hi Jackie...thanks for that video, and I enjoyed your revised lyrics. However, I was thinking more along the lines of Count Dracula. You know, you can’t keep a creepy Con down.🙀

Hi RT...yes, now that Harper is presiding over that shabby organization of right-wing parties, and now that Putin is their biggest sponsor, his views on Vlad have...um...evolved. Unfortunately for Harper, Putin has a long memory, so there won’t be a sweaty sauna summit anytime soon. Thank goodness for small mercies....

Hi J W....I can’t imagine that Scheer didn’t know about this meeting, One of Harper’s minions would surely have let him know. And what I want to know now, is why hasn’t our shabby Con media asked Scheer for a comment? And of course that other burning question, who is really running the Con party?

Hi Steve...Well that should at least get him into the Guinness Book of Records, which quite frankly is more than he deserves. He seems to think that his ultra right-wing views are now in vogue, and that he was a man ahead of his time. How absolutely pathetic...

Hi JD....I agree with you. His never ending attempt to undermine Justin Trudeau is one thing, But with hundreds of thousands of jobs at stake Harper is really playing with fire. Unfortunately we missed our chance to lock him up right after he was deposed, and there was stilll some evidence that hadn’t been shredded. But after this grotesque attempt to boost his profile what’s left of his reputation will be shredded beyond recognition...

Hi anon@4:19PM...Yup, if Harper thought he could impress Canadians with a shiny invitation to the Trump House, I’m afraid he’s in for a big disappointment. I have yet to see anyone even in the Con media celebrating that hot date, and I’m sure Scheer isn’t too pleased either....👿

How about Harper doing his impression of Sinatra except he'd be called "old dead eyes".
A fitting song would be:
"And now, the end is near,
and so I face, the final curtain..."
JD

A clever parody, but unfair to cats!

If I were betting I might bet Scheer might not have known either. Harper doesn't think much of him, I suspect, so why tell him. He is nothing to Harper. he isn't up to the job.

The Government of Canada found out Harper was going to DC because an American aide phoned the Canadian government. mistake one.

The alleged reason for Harper's visit is to discuss Israel and the "friendship" society or some such thing they're all a part of. yes, the wanna bee dictators getting together.

This is simply another e.g. of Harper behaving badly and wanting a moment in the lime light once again. he has been out of focus for some time and perhaps he is looking for work with the Trump administration, you know give his advise on how to handle Trudeau, Canada, etc. Don't know if the Americans are paying Harper anything, but what ever it is its too much. Harper never was, in my opinion, a decent or good Canadian. Let him go to D.C. and join the rest of thhe homophobic, racist, isolationists.