Justin Trudeau, the Elephant, and the Moose 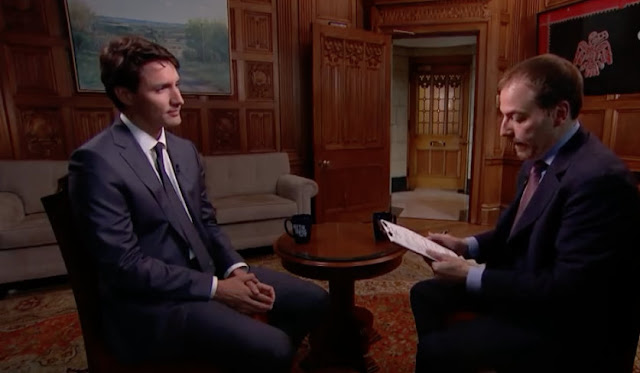 In an interview on the NBC News show Meet the Press he made the case that those tariffs not only make no sense, they're an insult to this country.

"The idea that we are somehow a national security threat to the United States is quite frankly insulting and unacceptable."

And also made it clear that Canada isn't about to roll over and play dead.


"We step up when we need to. We're going to be polite, but we're also not going to be pushed around," Trudeau said.

And while I liked that a lot, I particularly enjoyed the part where he updated his father's famous saying about the perils of sleeping with the U.S. elephant.

And I can only hope that Andrew Scheer was watching.

So that he might understand that his attempt to undermine Canada's negotiating position for crass political reasons... 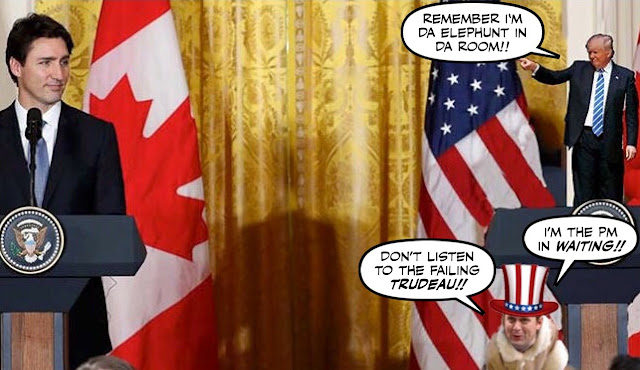 Even though that could cost hundreds of thousands of Canadians their jobs, is just not on.

It is the closest thing to treason I have ever seen.

And if he doesn't watch out that moose is going to come after him... 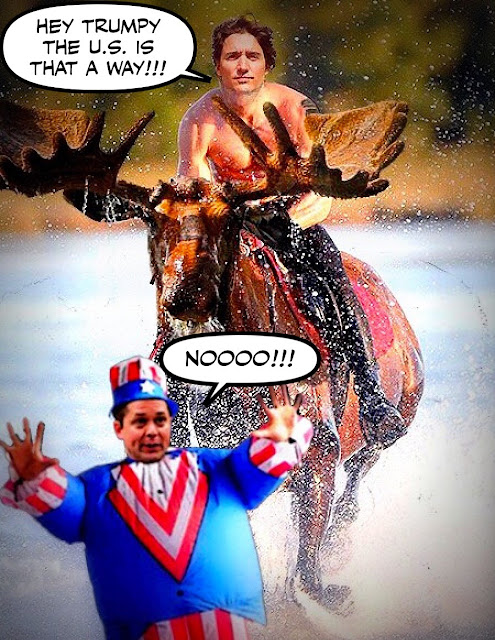 And teach him a lesson he'll never forget.

You know, I have been amazed at the support Justin Trudeau has been receiving for standing up to Trump.

But I guess I shouldn't have been surprised. Canadians are a relatively quiet people, but they don't take kindly to being bullied.

And they know a real leader when they see one...
Posted by Simon at 2:03 PM

And our friends in Mexico are the JAGUAR!!! Not as large as a moose or elephant, but very sharp teeth and claws, and feline wiles

I think Scheer and his alt-right traitors are getting the message you and others have sent them. They have stopped criticizing Trudeau’s tariff retaliation and appear to be running for the hills. I just hope Canadians don’t forget what they did, or what they might do if they ever formed a government.

I haven’t felt as proud to be a Canadian for a long time. As you said, we are a relatively quiet people, but those who think that’s a sign of weakness are in for a big surprise. Scheer and his traitors thought they could get away with it, but now they know better.

The elephant may weight more but it isn't an agile as the moose. get in the belly of the elephant and it could be toast.

I'm proud of Freeland and Trudeau and the message they are sending on behalf of all Canadians. Even if it costs us jobs and money, we need at some point to stand for our principles. If you give in to the bully, he will only come for more and more until there is nothing left. Those who support giving in the Trump don't seem to understand it isn't only Canada and Mexico he is targeting there is also the E.U. Together we make a formable group.

Some one might remind Trump the next time the U.S.A. comes calling the E.U. and us for troops for a war we will simply tell them we are a security risk to them and won't be joining them. we might want to consider doing that now and pulling out of joint missions in the middle east. why do we have to risk our military's lives when the Americans consider us a security risk. I'm very unhappy with Trump and any one who suggest Trudeau and Freeland are on the wrong track.

Or as Chrystia Freeland said on CNN, "we're known for being 'polite,' but there's a reason hockey is our national sport." And I'm sure it's not because of Don Cherry's unorthodox wardrobe.

I can't be the only one who thought of Monty Python, right?

A møøse bit the preznit of Amerika once. No, realli! Mynd you, møøse bites kan be pretti nasti...

Trump and Scheer apparently both forgot to consult with Patrick Brazeau on the matter, who can testify personally as to what happens when pugilistic cons underestimate the Canadian Kid. Or perhaps Andy the Android intentionally blocked that out of his recollection, or had it deleted from his memory chip by the equally humiliated Ezra Levant.

Let's remind 'em both of Hockey Balboa's feats of strength, shall we? Nothing would please me more than to see Justin run up the steps of Parliament, hoist his youngest above his shoulders and shout, "Yo! Hadrien!"

hi lagatta...between an angry moose on one side, and a hissing jaguar on the other, I wouldn't like to be caught in the middle. And if we can get an eagle, like the one that tried to bite off Trump's ear, attacking from above. He'll be forced to surrender before he loses his head or his hair... ;)

Hi Jackie...I'm not familiar with that Monty Python skit, but it sounds ideal. Just what the doctor or the vert called for. I once had a moose charge me in the northern Ontario bush, or at least advance towards me with a wild look in its eye, so I normally wouldn't wish that on anyone. But I may make an exception for Trump... ;)

Hi anon@3:17 PM...Yes I think you may be right. Most of their offensive propaganda seems to have disappeared, and they are back to braying about that pipeline, that they wanted to build but couldn't. But don't worry they have revealed themselves, and we won't forget...

Hi anon@3:28 PM...I think a lot of Canadians felt like you did, myself included. I like our Canadian character, and while we tend more placid and polite than many others, nobody should mistake that for weakness...

hi e.a.f...I agree with you, I'd rather live on grass (the kind cows eat) than ever give in to a bully like Trump. For as you point out, if you surrender to a bully, he'll only come back for more. Hopefully all of this can be resolved without endangering our friendship with our good neighbours. It's not their fault that Trump is their president.And when election time arrives in the U.S. I intend to do all I can to help them bring down the tyrant...

hi Jackie...I remember watching that fight live, and wanting to attack the TV screen to get at Ezra Levant. But never was the Levantine creature so disappointed, and the look on the faces of him and the goldfish Lilley when it was over was priceless.
And yes, I would like to see Trudeau challenge Schmear to a fight, I'm sure I would enjoy that one a lot... ;)