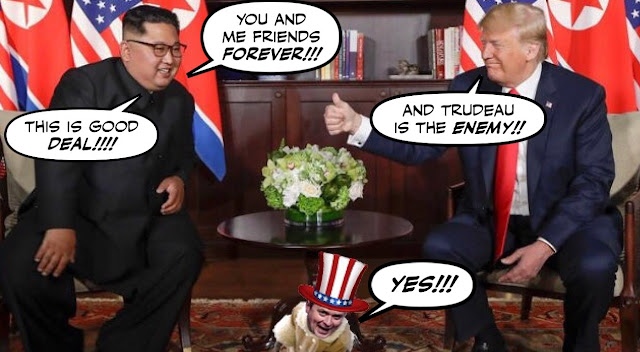 Well by now we all know about Donald Trump's new bromance with the North Korean dictator Kim Jong Un.

And how he likes Kim more than he likes Justin Trudeau.

Which can only please the treasonous Trumpling Andrew Scheer.

And while many pundits have taken aim at Trump's depraved relationship with Kim Jong Un.

Nobody in my opinion has done a better job of demolishing that meeting than Stephen Colbert.

You know, Trump sounded pretty satisfied with himself after that hot date with his new friend Kim Jong Un.

But I bet his Kimmy was even more satisfied... 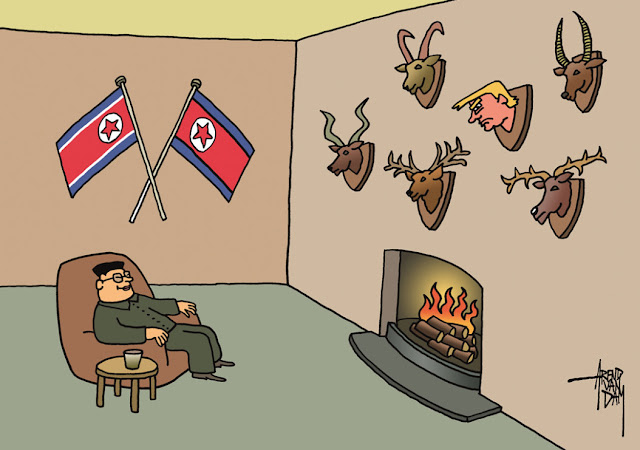 Is Trump a traitor, or is he just senile?

And what would you suggest as an alternative? Bomb North Korea? More sanctions? Please enlighten us.

how about similar regulations and ability to inspect N Korea that were in the Iran Deal that Trump walked away from?

Indeed. I'm very happy about easing tensions between both parts of Korea, or both Korean States. But that is fundamentally an issue for Koreans, though we know major powers such as the US and China will certainly try to have their say.

Certainly not developing a "bromance" with a totalitarian dictator who starves his own people and had his own brother killed, while labeling the genial and compassionate prime minister of America's closest ally a "backstabber" and a "national security threat."

The good news for Trudeau is that he's pissing off all the right people. The bad news for Trudeau is... he's pissing off all the right people. Not that he'd be interested in the least, but considering Rocket Man's fratricidal history and Donnie's own ultra-competitive enmity towards Fred Jr., it seems the only way Justin could get on Donnie's good side now is to clobber Sacha in a no-holds-barred bloody Thunderdome match. Or Sophie. Or Margaret...

Perhaps you have an alternative to playing kissy-face with a madman while treating a humanitarian liberal leader as a terrorist?

A great day for dictators and wannabees , the rest of us should probably be grateful that the planet is not radioactive. The free publicity will help Trump in the mid terms and promote the meme that tough smart people take what they want without consequence as well as give Kim the now admired dictator a boost on the international stage. The thing is that although there is a code and sometimes autocrats can work together for common purpose there is no honor among thieves and we all know how the story ends. Sometimes it just takes longer than expected. The great moralistic fight over communism played out over the past 70 years and cost countless lives, its unlikely the great golden autocratic empire will be the theme for the next 70 but Trump and Kim are willing to give it a shot if we let them.
RT

Dont praise a guy who blows up his relatives with ACK ACK guns period!

Trump likes guys like Kim3, Putin, Erdogan, etc. because they're dictators and he wants to be one also. he's working on it. Making like he is good pals with Kim 3 does not send a good message to any country which isn't a dictatorship.

Trump doesn't understand diplomacy, history, or how things actually work in the world. he is friends with whomever smiles at him. He has a new "friend" because the G6 don't like him. He needs to be constantly praised or his fragile little ego goes pop.

he wants to be a friend with a murdering sob, go for it, let him move to N. Korea. In the mean time we ought to ignore the slob.

Watched that show. it was hilarious.