The Insane Adventures of the Increasingly Desperate Stephen Harper 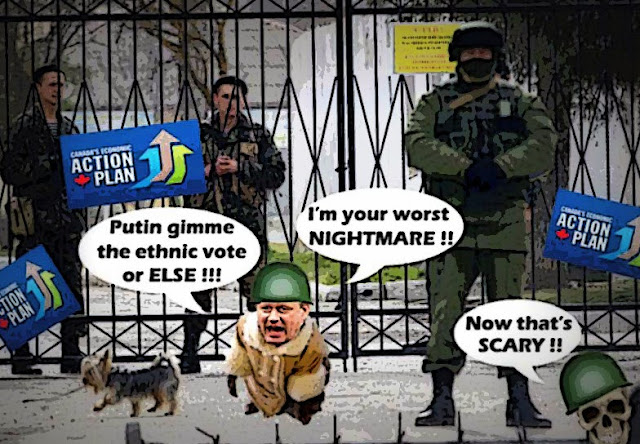 OMG. Duck and cover. He's back in Ukraine again, posing as a champion of freedom and democracy.

Canada has and will continue to stand with the people of Ukraine. #cdnpoli pic.twitter.com/NUgLXw4slz
— Stephen Harper (@pmharper) June 7, 2014


While crushing them both at home.

And of course, in relentless pursuit of the ethnic vote, trying to make it sound like he's leading the charge against the fascist dwarf Putin.

Even if it makes him look ridiculous.

“I’m not meeting with Mr. Putin and neither is President Obama,” Harper said in an exclusive interview airing Sunday on The West Block with Tom Clark.

Or out of the loop.

But Harper appeared caught off guard. Shortly after his interview with Clark, the White House and the Kremlin both confirmed U.S. President Barack Obama met with Putin briefly on the sidelines of a leaders’ lunch in Normandy, France.

Or look like an increasingly desperate maniac, who would stir up a dangerous crisis to win votes and pimp for Big Oil. 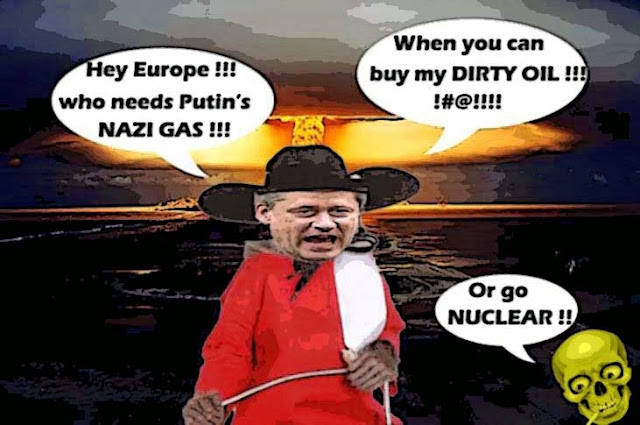 Canada is about to win a major concession from the European Union, which is on the verge of removing the “dirty oil” label from Alberta oilsands product, the Financial Times and Reuters reported Thursday.

Observers credit years of lobbying by the Harper government for the expected change, but the recent crisis in Ukraine also played a role. With Russia looking like a less secure source of oil and natural gas, European policymakers have been looking for new energy partners.

But of course another reason Harper is acting so aggressively is because he's psyching himself up for another kind of oil war. The one that will erupt within him in a few days time, when he must announce his decision on the Northern Gateway pipeline.

And he will be forced to choose between Big Oil and voters in BC, with no easy way out. 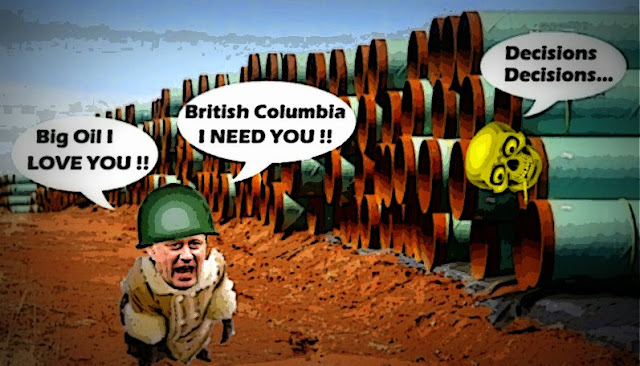 If the Conservatives are to be consistent with what has become a defining mantra, the choice may come down to taking a sip out of a poisoned chalice — by tying cabinet’s approval of Northern Gateway to some additional conditions — or drinking it down to the last dregs.

On election night 2015, B.C. could make the difference between a Harper victory and a defeat, between a majority and a minority government. Anything short of a cabinet rejection of the Northern Gateway pipeline later this month will ensure that the issue is on the election radar next year and it will not become part of a winning formula for the Conservatives between now and then.

Which must be driving him crazy. And no doubt explains why he is picking fights with EVERYONE.

Bruce Carson, a senior aide from 2004 to 2009, said the PM is becoming increasingly isolated and is prone to losing his temper and shouting profanity at underlings.

Gerry Nicholls—who worked closely with Harper a number of years ago—tried to defend the PM, saying, “Only once did I see him erupt at somebody, and he later told me it was just an act. He was trying to send that person a message.” Riiiight—the old “I was totally just kidding about having an inherently volcanic nature” excuse.

Still, there are political implications. Whether he likes it or not, Harper is carving out a reputation as a cross between Howard Beale and Howard Hughes. I’m as mad as hell and I’m going to let my fingernails grow as I sit alone in this darkened room!

Golly. Isn't that a nice image to take into the weekend eh?

An increasingly desperate Great Warrior Leader picking fights with everyone.

Trying to start a war in Europe, about to start one in BC.

One he can't win.

And heading for his just reward... 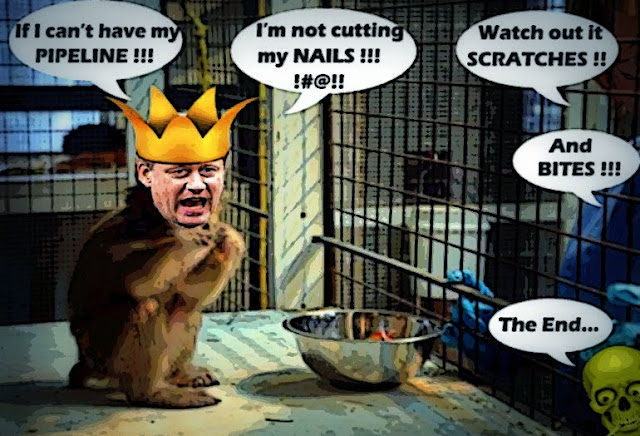 I'm not convinced that the impact of Northern Gateway will sway harper's BC base to the point of deciding 2015 Simon. There are pockets of this province that would elect a blue suit even if a video surfaced of them smoking crack or blathering on about the pussy buffet they have to eat at home. The progressive voice is very marginalized and I live in the middle of one of the most con infested areas in the country. Go figure. The other problem we have are the carefully placed ads from the folksy Janet Holder and a media that squeezes in the reports that support for NG is on the rise in BC. Once harper makes his inevitable announcement in support of NG, next will come a very well planned smear campaign and ramp up against the radical environmentalists and foreign interests that would damage jobs and the economy. In other words, watch out for the propaganda that we will pay for coming our way in droves.

with his new powers to spy on citizens, it will be easy to round up people who oppose him on the oil/gas thing. Once a few are in jail, the rest will just fall into line. Harper will not loose seats in B.C. over oil/gas pipelines. Remember this is a province that mines for money in the pockets of children who live at 50% below the poverty line. Beyond a few concerned citizens, no one cares. it doesn't even get discussed all that much and B.C.'s MSM gave it a quick mention and then it was move on.
B.C. is a province where teachers who have been on strike a total of 14 days since 1997 are referred to as radicals/ B.C. is a province which does not consider children with attention deficient disorder as learning disabled. Oh and the teachers are the lowest paid in Canada. We have the highest rate of child poverty in Canada.
Unfortunately B.C. isn't exactly a "progressive" province, more like a bunch of "Neanderthals"

Harper's comments regarding Putin are rather amazing. Harper forgets Putin was elected. Then Putin started to dismantle what democracy Russia had. So perhaps Harper could explain how he is any different than Putin, except Putin may be smarter than Harper. Oh, Putin invaded Ukraine. Did Harper give any thought to what Canada and some other countries did to Iraq and Afghanistan? It all depends upon whose ox is being gored.

If Putin is so bad, why are China's leaders so good?

Oh, well those pictures of Harper "waddling" around Europe while at the 70th anniversary in France. All that weight gain can't be good for his health or perhaps he is just practising some sort of new "step", when he "walks".