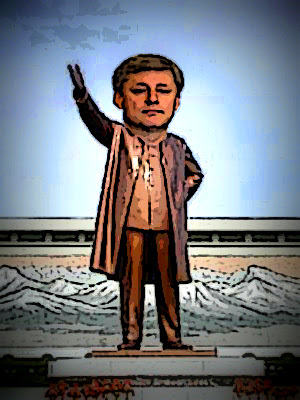 Historians will no doubt have a hard time trying to explain how so many Canadians were fooled for so long by Stephen Harper, in the horrifying years known as The Great Darkness.

When evil reigned, scientists were muzzled, history was reduced to propaganda and the cult of his personality. And hope withered on the vine.

But at least they'll agree on one thing: He was no Canadian hero or a Great Leader.

Except in his own troubled mind.

Just a morally depraved tinpot dictator, who must have really hated this list of REAL Canadian heroes.

Canadians have handed the Harper government a Top 10 list of the country's greatest heroes, featuring some of the Conservative party's greatest adversaries, past and present.

The list, compiled from online consultations in the run-up to Canada's 150th birthday in 2017, includes Pierre Trudeau, Jack Layton, David Suzuki and Lester B. Pearson.

Because let's face it eh?

Just the sight of Trudeau and Suzuki on that list is enough to make him crawl on all fours around his office, screaming like a hyena, and biting the carpet.

Or climbing the walls... 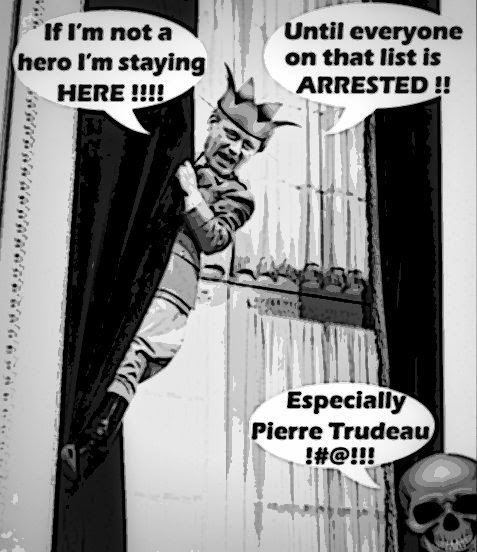 And it It must be maddening to know that only ONE Con made the Top Ten.

And he would probably have disowned him and his sinister cult... 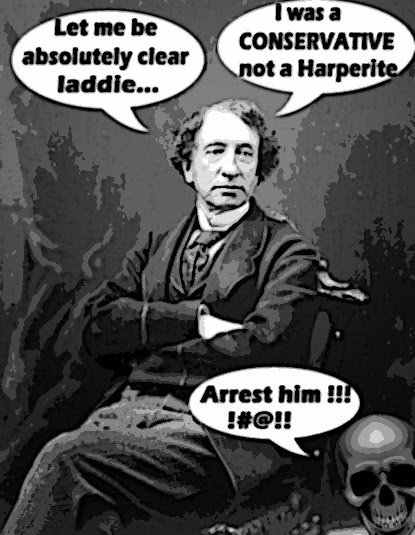 And of course, this must have REALLY driven him over the deep end eh?

The consultation also asked which of Canada's accomplishments of the last 150 years "make you most proud to be a Canadian?"

Medicare topped that list, followed by peacekeeping, then the 1982 Charter of Rights and Freedoms at No. 3.

Can you believe it? The Charter he has tried so hard to violate. The peacekeepers whose noble record he has tried to diminish. The medicare system he is stealthily working to destroy.

Could it be more embarrassing? Or more of a slap in the face.

And of course speaking of embarrassing, it would have to be Shelley Glover, the hapless Heritage Minister, trying to downplay that list, or BURY it... 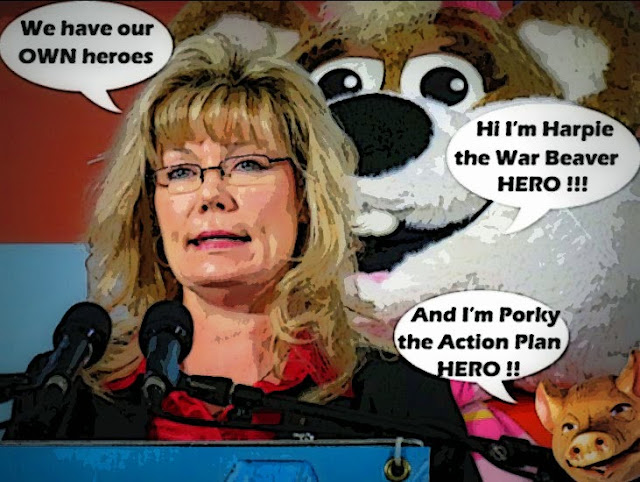 Glover said the exercise was simply to consult Canadians about how to celebrate 2017, adding "we have no intention of making a kind of final list."

Because she's no Canadian hero herself. Except to the gun lobby and others in the rabid Con base.

Or their sympathizers and collaborators in the Con media... 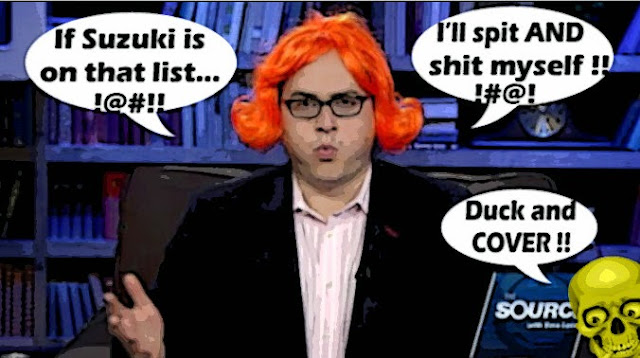 Who if that list was ever honoured would demand that Glover shoot the CBC TOMORROW. Instead of sadistically bleeding it to death.

And the good news? Isn't it great that after all those ghastly years, Stephen Harper STILL hasn't been able to kill our Canadian values?

And that as the Ontario election showed only too clearly, Canada is STILL a progressive country.

Because it can only mean this: Harperland has no future. It was just a monstrous aberration.

Their demon seed has failed to take root.

Cons could never be Canadian heroes.

And the Great Dictator will soon be on his way to the scrap yard of history... 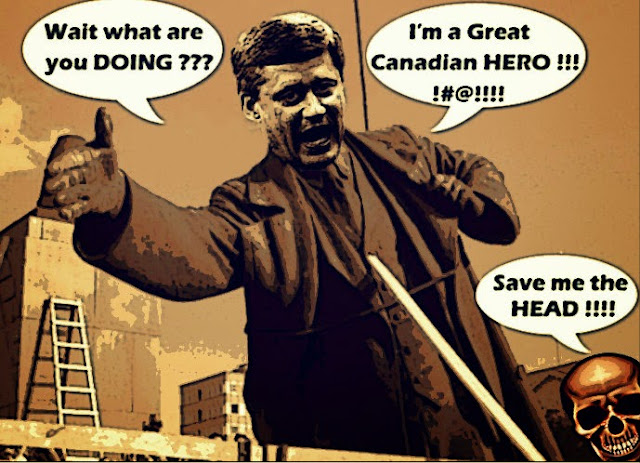 Yep, looks like the Big Shift that Ibbitson (of that paper that reportedly retooled its editorial from endorsing Wynne to Hudak) and Bricker (of the Ipsos Reid that had predicted Hudak would sweep every part of Ontario, surprised?) is all in their imagination. And Wells is telling us we should watch and learn from Harper ... no wonder the pundits got the Ontario election so wrong. Wells should have watched and learnt from the electorate.

Our "social medical system" is one of the things which I've always thought of as a thing which made Canada such a great place to live. I'm proud of it. I remember when it became a reality and I remember what it was like prior.

Yes, Lester Pearson was a great man who did a lot of very good things, peacekeeping was one of them.

The 1982 charter of rights and freedoms, you bet. So I'd agree, those 3 things are the best things about this country and its what makes this country so liveable.

Harpie and his herd haven't done anything of note, well o.k. a lot of negative notes.

I've always been somewhat amazed that the same country that chose Tommy Douglas as the greatest Canadian EVER a few years ago could then elect such thugs as inhabit the PMO these days. Even all the cheating and voter suppression hardly accounts for the fact that we are ruled by a fascist thug.....of course having the Liberals and NDP spliting the vote of the MAJORITY of Canadians doesn\t help!

hi anon...they certainly are quite a crew, but I have been enjoying Levant's bitter reaction to the Ontario election result. Like Coyne and Ivison and others he seems to think that not slaying the deficit right now, will bring down the roof on our heads. But I believe that Wynne is promising to eliminate the deficit only a year later than Hudak, so if she is smart and explains herself well, I don't think the delay will hurt her. And she has made a lot of new friends in the labour movement, so that could help her too...

hi anon...yes I can't help thinking that a lot of our pundits live in the Ottawa bubble, and don't realize how much so many Canadians hate the Con regime. Either that or they are all hoping to be Harper's next flak. As we know he changes them every six months. And though I didn't mention it in the post, the record shows that a government and a leader that has been in power as long as Harper has, is very vulnerable to being tossed by voters who just want change, any kind of change....

hi e.a.f....I was enormously encouraged by the support Canadians still show for those three pillars of what I consider our traditional Canadian values. And I'm hopeful that when Canadians understand how Harper is trying to undermine medicare, that they will react accordingly....

hi kootcoot...even after all these years I can't quite believe that Canadians could elect a government that is so opposed to everything that once made us such a decent country. As I said in the post I hope it's an aberration. But as you point out, we wouldn't be in this mess if the progressive vote wasn't divided. Nothing frustrates me more than that, and I only hope that one day people will realize how their crass partisanship has hurt our poor Canada....

hi David...I hate to imagine what kind of list Harper would come up with, but your list seems like a good guess. All I would add would be Leo Strauss and Ayn Rand... ;)

stompin tom, jeepers, what is this country coming too:)

"Just the sight of Trudeau and Suzuki on that list is enough to make him crawl on all fours around his office, screaming like a hyena, and biting the carpet."

This is making me giggle like a madman! The mental imagery is pure gold, thank you Simon.