WorldPride 2014 and the Shadow of the Deathly Con Regime 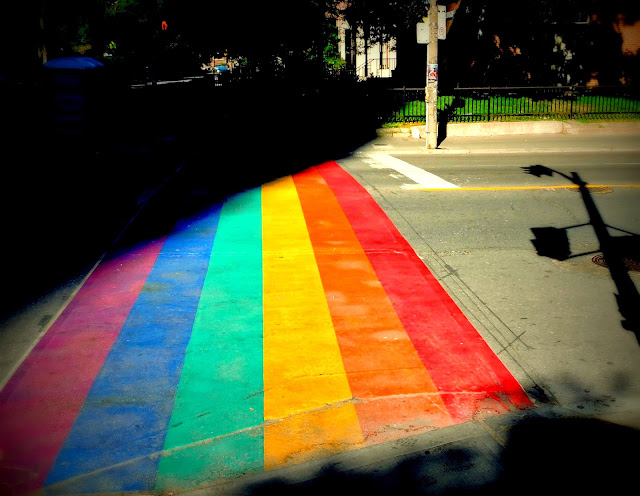 Well it wasn't the yellow brick road, it was just the rainbow crosswalk in Toronto's gay village.

But it did lead to an amazing place.

A celebration so big that two million people are expected to attend, and at one point 25 city blocks will have to be closed off.

And all I could think was, we have come a long way eh?

And so has Canada. 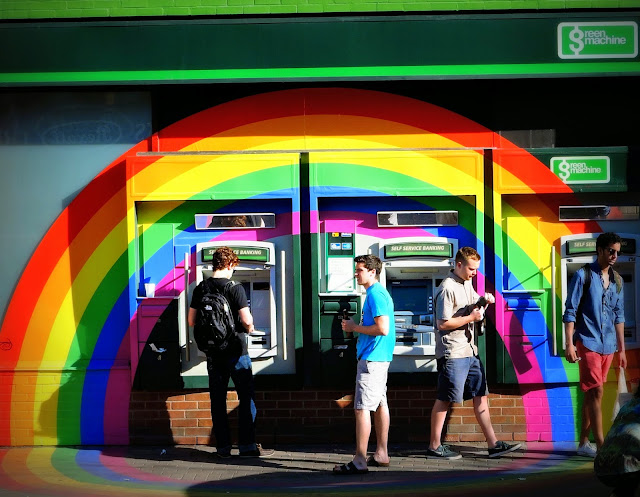 But of course it's more than just a big party, and definitely more than about corporate acceptance.

It's a chance to meet with LGBT activists from all over the world, and support those who are still fighting for their freedom in places like Uganda. 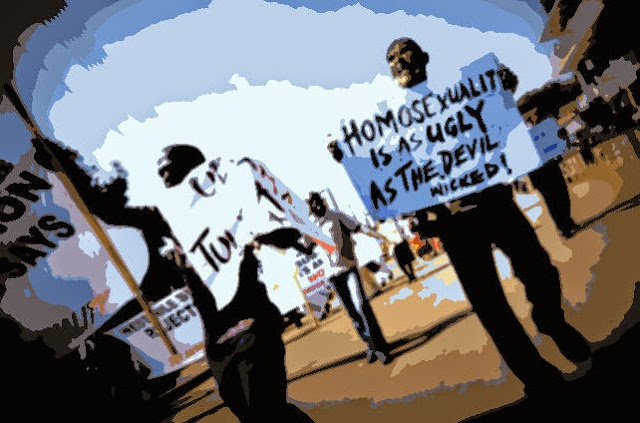 Ugandan Richard Lusimbo still lives in fear nearly four months after a local tabloid put a picture of his face on its front page accompanied by the headline "How I Became Homo."

"I couldn't speak to anyone in my family or my friends. I was shut out, I just couldn't move in public, because I didn't know who would attack me on the street. I couldn't go for grocery shopping."

And for me it's also a time to remember the millions and millions of other gay people who couldn't make it to WorldPride 2014.

Not just those in Africa, or all those other countries. 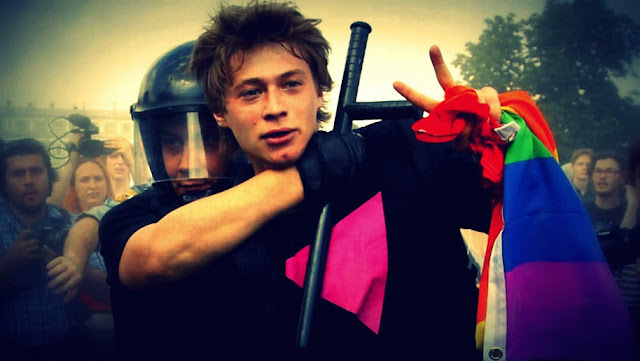 But also all those gay kids in Canada who were bullied to death before they too could make it to safety and freedom. 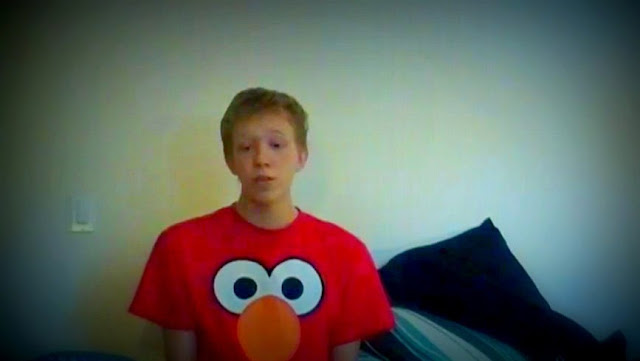 Who like so many others had the misfortune to live in a country with a leader like Stephen Harper.

A morally depraved bully who has voted against every gay rights bill ever brought before Parliament.

A creepy kook who believes that gay people choose to be who they are... 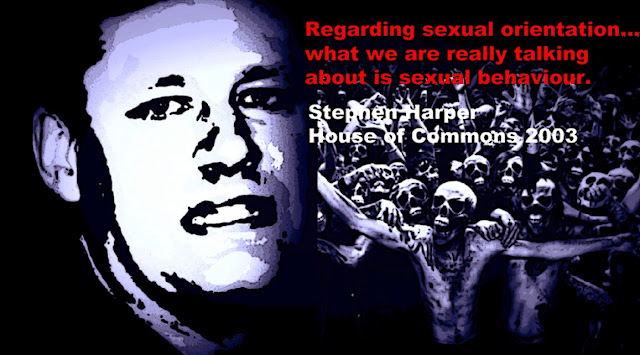 A monster who in eight years in power never lifted a finger to fight bullying or homophobia, to pleasure the rabid religious base of his deathly Con regime.

Until when forced to do something about bullying, came up with this monstrous bill.

Which doesn't even mention the world BULLY.

In fact, the term ‘cyberbullying’ may be a bit misleading: there are no mentions of ‘cyber’ or ‘bully’ in the document, despite the fact that the bill originated following several children committing suicide as a result of online bullying.

And makes me sick to my stomach.

But then when I stared at this mural today I was reminded of how long and how brutal has been the battle... 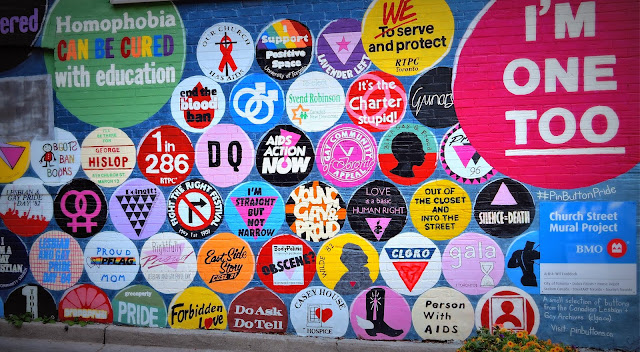 How proud I am to belong to a community that has had to struggle so hard for its rights, and the rights of others, but never gives up.

And how especially proud I am that all my closest gay friends are fully engaged in the battle to defeat the Con regime. Because they REALLY know how to fight eh?

So I'll end, as I have before, by letting poor Jamie Hubley, who I'm sure would have attended WorldPride if he was still alive.

Send this message to Stephen Harper from beyond the grave.

We do not CHOOSE to be gay, we were BORN this way...

And I'll just say this:

We will remember Jamie, all our martyrs, and all the others who could not make it to WorldPride 2014.

We will march for them as well.

And Stephen Harper should know this:

Wherever the rainbow flag of freedom flies.

He is not welcome... 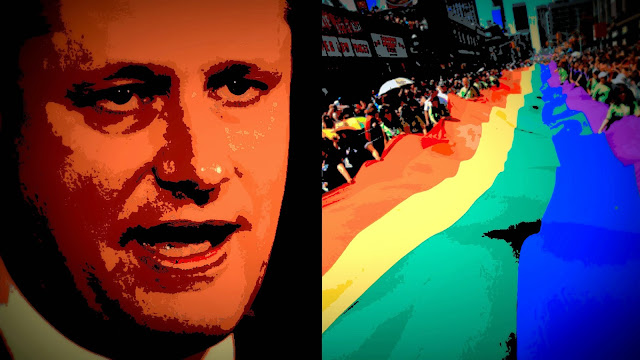 As I have said before Simon when it comes to this particular issue we have no daylight between us, except perhaps on the best way to remove Harper from power, but aside from that we couldn't be any closer. While my opposition to Harper was more on process issues because I knew that was where his real secret agenda was aimed at as opposed to the social issues of concern to his socon base I never forgot how he systemically, consistently, and totally took every chance to repudiate our basic human rights wherever possible. Hell, he was less consistent on that noted "terrorist" Maher Arar in the end than he was towards anything to do with gay equal rights rights, which shows just where we rate on his concern meter.

I have watched homophobia and intolerance destroy far too many people and their lives, as you know that includes my first love from my teens. I have also watched it in so many who stayed in the closet out of utter fear for rejection by those closest to them, to fear of loss of not just employment but employability of any sort of all. I was raised by a woman who worked at the RCMP intelligence unit (later to become CSIS) during the period in the 50s and 60s where they were routinely screening Canadian citizens of prominence and public office holders for anything possibly homosexual in nature because that made them a security threat (although to be fair that was at least as much if not more because of how it could be used to blackmail by foreign powers in the Cold War era than because of the acts themselves).

I remember the long constant slander of PET throughout his entire time as PM by opponents for decriminalizing gay sex and how it proved he was a secret homo and had gay orgies at 24 Sussex Drive and it was why Margret divorced him. I have seen the beginning of GRID aka AIDS in NA and the fear it sparked as the "Gay disease", and how many straights saw it as the fitting solution to deal with the "gay problem" (I'm cleaning it up, rarely was gay the word used, fag was the least offensive and it went downhill from there) once and for all. I watched as we went from there to starting to accept that being openly gay was not something one had to fear, and then I watched the fight for marriage equality under the law take shape, look like a long shot for so long and then finally gain legal and finally social acceptance. I have seen Canada come a long way in my life.

And what have I seen Harper do ever in his political career do aside from pander to those who were filled with hatred and intolerance and bigotry towards any non-straight people? I never once saw him stand for simple basic human rights for us because we were not worth it to him, what his private beliefs are I have no clue because he is by his record difficult to tell whether he was professing true position or pandering to political elements in his core constituencies since his first foray into politics back in the 80s.

One of the interesting things for me Simon is that I am a white male who despite being comfortably bi since my teens never seemed to come off as anything other than totally straight to people, especially the bigots, so they tended to assume for the longest time I shared their beliefs and what I would hear and see...*sigh*. Even to this day apparently unless I raise it myself I don't give off that vibe to people (mind you being married to a woman probably does aid in that where those who are aware of my marriage have been concerned but that still does not change the truth of it for all the rest). So even in this day I occasionally get treated like I might still be a member of that lodge, but these days even when it is at its strongest the comments are so weak compared to what I was used to growing up, are far more tentative and ambiguous intentionally so as to give the asker room to pretend they weren't fishing for like minded folks, and while I am still saddened by their presence the fact that they have to be so careful and so concerned about public reaction to displaying their intolerance towards us, well that does warm the heart.

Enjoy your Pride Simon, while I may not be a marcher myself I have always taken great comfort in those who are and cheer them on. As I told you before, because of issues I had with the local gay men political groups around here in my youth/20s I was alienated from the local activist scene, but that does not mean I do not support those who are active. And at least these days being bisexual is not seen as treason or being wishy-washy but a real aspect of alternate sexuality, and that acceptance on the gay side of the street in some ways matters even more to me than the acceptance form the straight side of the street, because I was far more wounded by those in the gay community this way than I was from those I expected it from. Still, it has a ways to go, but compared to where we were in my childhood the progress is remarkable indeed!

Let us hope and pray the rest of the world catches up before too long for the sake of all our fellow humans persecuted for daring to love the way they are born feeling, instead of what is imposed as the one and only true path.

enjoy Pride. As they said, when Wynne won the Ontario election, an openly gay woman and it was never an election issue. At least we are civilized people. of course, there is Harper and his Con base, but hey, they aren't invited to the party.