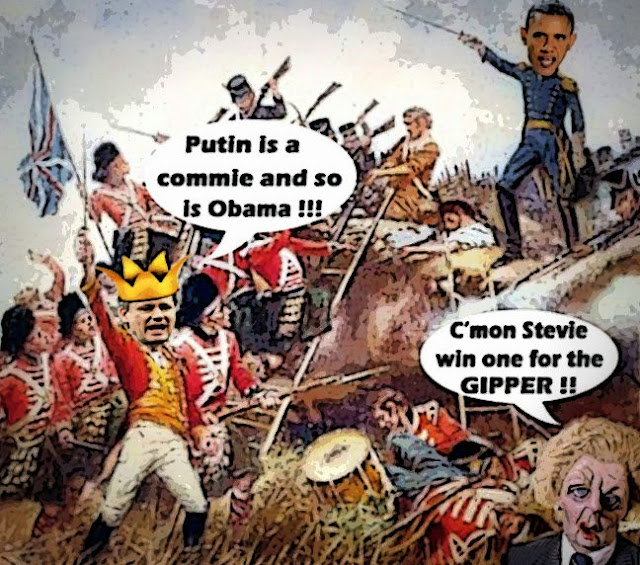 Well as you know Stephen Harper has been duelling with the voices in his head. Seeing enemies everywhere, and losing track of what century he's living in.

Two days ago he was channelling Margaret Thatcher, fighting the Cold War all over again.

Challenging Vladimir Putin to knock down the Berlin Wall, and surrender the ethnic vote.

And today he tried to go after Obama only to get clobbered. Or impaled on his own petard. 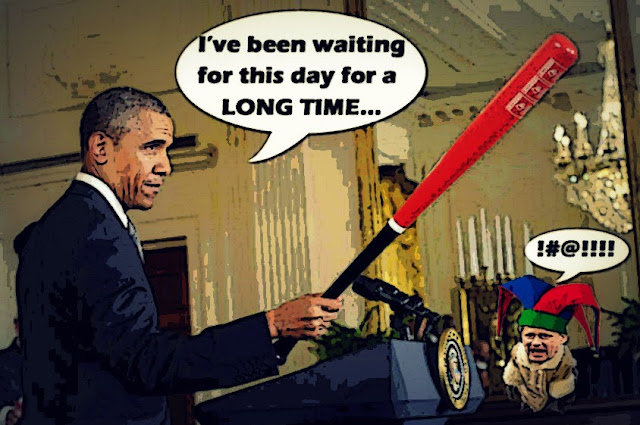 For decades, U.S. climate change policy amounted to a hypocrisy associated with bad parenting: "Do as I say, not as I do." That began to change Monday when President Barack Obama's administration announced its boldest step yet to reduce the nation's biggest source of pollution blamed for global warming -- carbon emission from power plants. 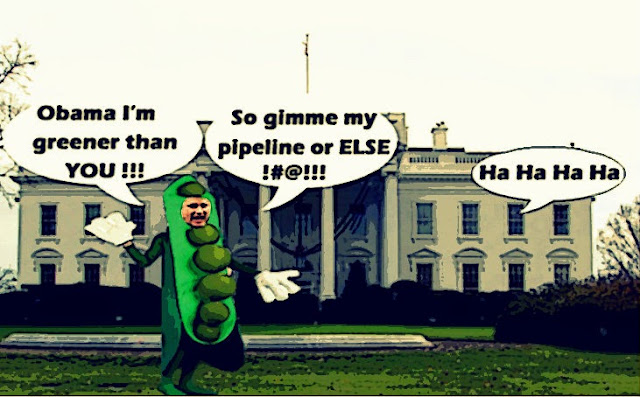 Except when he's delirious.

The federal government is responding to U.S. President Barack Obama's latest climate-change action plan with a shrug: been there, done that. But observers of environmental policy say the United States will take a big leap ahead of Canada in meeting its greenhouse gas emissions targets for 2020.

Or trying to scam us like a Con artist.

Prime Minister Stephen Harper noted that Canada announced similar action on coal-fired electricity plants in 2012, and he predicted the percentage drop in emissions from those plants is likely to be proportionately greater than those proposed by Washington.

But coal is by far the largest source of greenhouse-gas emissions in the United States, while Canada's is oil and gas. The economic impact of the coal regulations will likely make it a bigger political sacrifice for Obama than it was for Harper.

While trying to cover-up the fact that him and his foul Con regime have done NOTHING to control greenhouse gas emissions.

Regulations on Canada's largest oil and gas emitters have yet to be released, seven years after they were first discussed.

And that by doing nothing, not only has he acted shamefully.

In the boldest step yet that the U.S. has taken to combat global warming, President Barack Obama’s administration has just rolled out an ambitious but credible program to tackle America’s biggest source of carbon pollution, its heavy reliance on fossil fuels, especially coal, to generate hydro power. The initiative puts Ottawa to shame.

Sadly, Harper’s government is nowhere close to identifying a similar path, much less making headway. The Conservatives profess to be on track to trim emissions by the same percentage as the U.S., but experts scoff at the claim. At the current rate we’d be lucky to get halfway to our target.

He has allowed Obama to humiliate him. 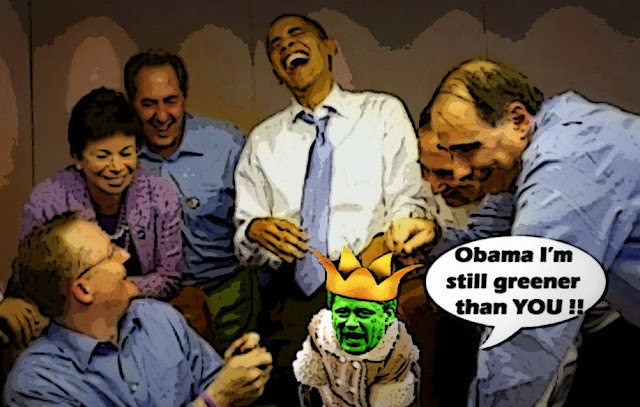 And shot himself in his own pipeline.

Harper can now expect to face increasing pressure in the run-up to the 2015 federal election to come clean and admit that he has no intention of honouring our Copenhagen pledge. Or, preferably, to accept the high costs of mitigating the carbon output from our own biggest problem, the fast-growing western oilsands. Otherwise our reputation as an oil and gas exporter will take another knock, hurting prospects for pipelines and future sales.

But climate change will be a big issue in the next election.

And we'll make sure he has no future either.... 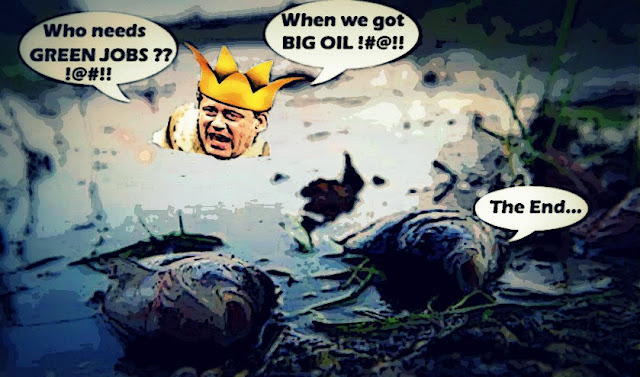 Can you imagine if it was Justin Trudeau on the outs with the President of The United States. But our mainstream is all bad Obama,

Harpie and his herd are simply not with the international agenda, the green one. Even Iran is getting with that agenda. Germany made a decision to switch to renewal sources for electrical power when they decided to close their nuclear plants. electricity from renewable sources now make up 27% of all electricity generated in Germany. They're doing so well, Iran held a conference on the subject at their German Embassy. Iran needs an additional 5,000 Kwh per yr. every yr in the foreseeable future. They've decided to use renewal sources for that. They currently provide their citizens a grant of up to 50% of the cost of converting to solar energy. Not bad. They also give a subsidy of 15 cents per kwh if the electricity people use comes from renewable sources. So if the old mullahs are getting it why aren't the cons?

. Obama has most likely decided this is the best he can do for his country on his way out of office. Now if he'd just take harpie with him. Harper is a climate change denier. He is part of the religious community which are "end of dayers". They either think "god" isn't going to let it happen or if god lets it happen, it doesn't matter because he is going to "heaven". Right. If he is so sure he is going to heaven perhaps he could volunteer for active duty in the middle east and take his chances on getting killed, like so many of our veterans did.

his Steve...the Harperite cult tried to defeat Obama before he even became President by leaking some story about I believe his position on NAFTA. And his record in office has been appalling. The only good thing is that by alienating Obama he has only shot himself in the foot...

hi e.a.f....as I've pointed out before, Harper had hardly travelled abroad before he became PM, so the man lacks the smarts that one made Canadians such good citizens of the world. And even his dealings with the U.S. have suffered from that ignorance. Had he made the slightest effort to at least look like he was serious about controlling GHG emissions, he could have had a much easier time trying to get the Keystone pipeline. Instead he tried to bully Obama and good luck with that one...

Harpie would have to get up a whole lot earlier to "bully" Obama. Obama's childhood most likely adequately prepared him for having to deal with bullies. Getting to the top of the pile at university, most likely made him immune to "bullies". Good luck harpie, Obama is so much more intellectually advanced than harpie. Obama simply puts harpie in the same category as Putin. No, I take that back. Putin, is tough. Harpie is a like a fat frat boy.

What Putin hard it adequately. The American government very successfully breaks all relations. This is evidenced by the growth of the dollar against the ruble. It is very cruel. Putin should be soft to such sanctions? I would be very angry at America.