Stephen Harper and the Final Assault on Medicare 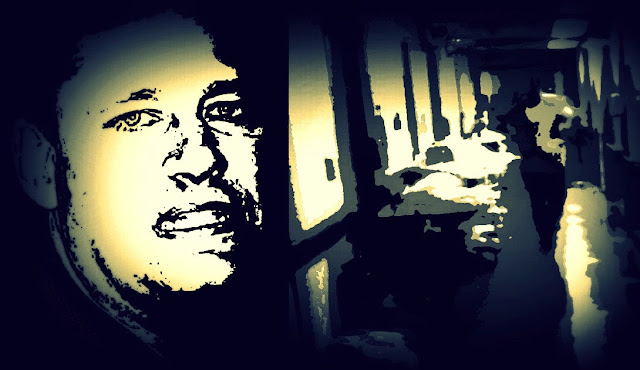 It's been less than two months since the Cons let the Canada Health Accord expire. And the corpse is still warm.

But I see that Stephen Harper is in a hurry, and has given the order to begin the second phase of his plan to kill medicare.

The federal government today launched an advisory panel on health-care innovation aimed at improving the quality and cost-effectiveness of Canada's health system. Health Minister Rona Ambrose announced the official launch of the panel in Toronto as members held their first meeting to discuss how various innovations could bring the greatest value to Canada's health-care system.

Because just one look at who is on that panel should tell you that when they talk about "innovation" what they really mean is PRIVATIZATION. And the end of medicare as we know it.

And it's just what David Cameron and his ghastly Cons did in Britain. Promise to discuss ways to improve that country's National Health System... 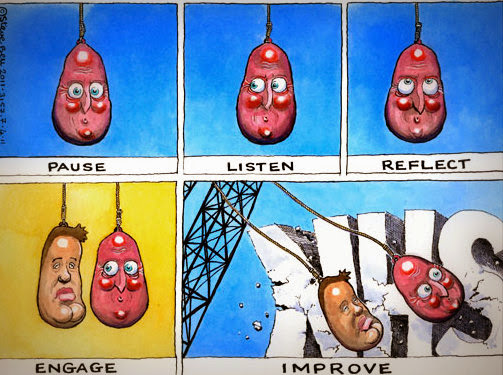 Only to begin demolishing it.

Privatizing it beyond belief.

And killing it slowly quickly... 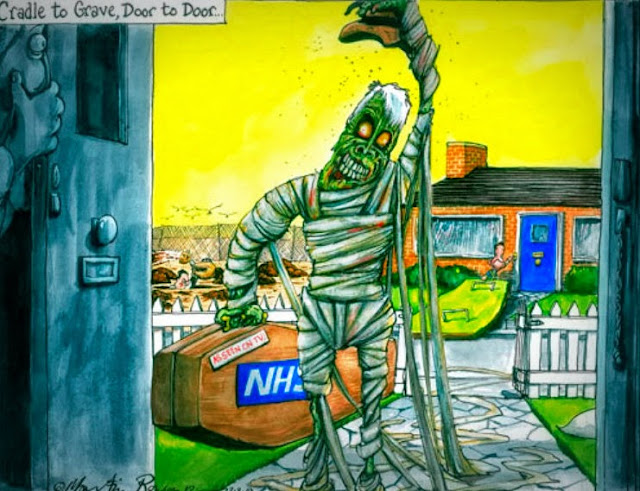 And while the Cons in this country attack medicare by preparing to cut transfers to the provinces, and convening panels to suggest ways of privatizing it.

A group called the Canadian Constitution Foundation, spearheaded by Dr. Brian Day the owner of a for profit clinic, is preparing to mount a court challenge that could undermine the very idea of medicare.

Canadians are at risk of losing Medicare as we know it. Dr. Brian Day, owner of Vancouver’s for-profit Cambie Surgery Centre and a leading proponent of privatized health care, has launched a constitutional challenge to Medicare law in BC. He argues that if you have the money, you should have the right to buy your way to the front of the line.

The case is being called the most significant constitutional challenge in Canadian history. The trial date is now set for September 2014.

Even though it would cause massive suffering for those who can't afford private health care.

Allowing some patients to pay for faster care does not take the pressure off the public system, as many have argued. Doctors can only take care of one patient at a time, and when they are serving rich private patients first, they are not available to serve the rest of us, even when our need is greater.

While the elite might get faster care, an abundance of evidence shows that for-profit hospitals reduce access to care for everyone else.

And even though polls show Canadians want their precious medicare system, this country's greatest collective achievement, improved not DESTROYED.

Canada does not need health reform through an end-run in the courts that’s driven by for-profit clinic owners. What we need is evidence-based improvements to reduce wait times in emergency rooms and for elective surgeries. And that means we need government leaders who are committed to improving medicare. Poll after poll shows that Canadians favour investment and innovation in publicly funded health care to improve the system, not the expansion of a profit-driven system that benefits the few and harms the many.

But the big push is on. The health care for cash lobbyists are circling over this country like grubby vultures. And many of them have flown north from the United States.

Where they have spent millions lobbying lawmakers, or trying to make their own citizens believe that health care and government are something DIRTY...

And they are now preparing to do the same thing in Canada, with the stealthy support of Stephen Harper and his foul un-Canadian regime.

And the scariest part is that most Canadians have absolutely no idea what's going on. Our useless opposition parties aren't doing enough to warn them.

So all we can hope is that they listen to messages like this one...

And all I can say, especially to the older Canadians who keep voting for the Cons, is don't do that again if you know what's good for you.

For you can't imagine how much you will suffer, if you don't defeat the monstrous regime, and its depraved leader.

Trust me, I know.

Vote as if your life depended on it.

Because it really does... 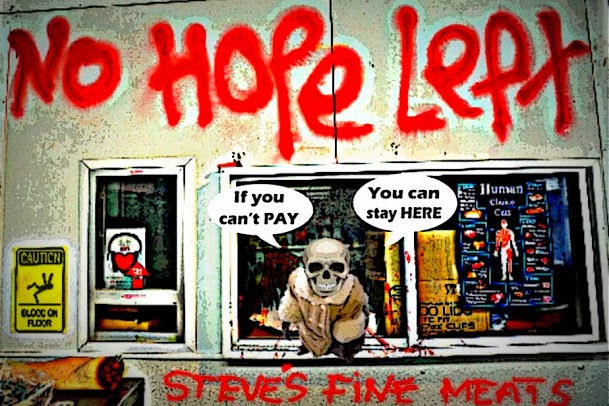 This "health care system" that the harpie crime cabal is trying to institute is the same kind of failed system that has destroyed the 'mukran health care system. It is the rethuglican "pay or die" health care system that makes doctors fabulously wealthy because of the top 10% being able to pay their astronomical fees and regular citizens literally dieing in the streets because hospitals turn them away for lack of "insurance" (that term came straight out of the mafia playbook!) or the lack of funds to pay to save their or their loved ones lives AND O-BOMB-A CARE ONLY BENEFITS THE BIG INSURANCE COMPANIES. Privatization is the death of good, quality healthcare in any country. That fucking asshole in B.C. should be hung, drawn and quartered!!! All he can see is the huge amount of MORE money he will be making. That miserable money grubbing cocksucker took a hypocritical oath, not a Hippocratic one.

If there ever was an example of the need for immigration reform it is Brian Day..
As an ex-Vancouverite, i had to watch helplessly as he launched his own greedy attack on universal medicare, first by opening his 'clinic' and then running for and winning the presidency of the BCMA...
Found out later from my own doctor that the 'medical associations' once so respected and considered the highest of highs is an organization that many, many doctors have opted out of, because of their Chamber of Commerce- like leanings to the far right...
Now Day is challenging our constitutional right ot open access? He should be stripped of his citizenship (if he has bothered to get past the landed immigrant status) and be sent on his way...

The majority of Canadians gave Harper and his herd a majority government. You reap what you sow. The chickens are going home to roost, etc.

For some of us, we can apply for dual citizenship in Europe and maybe able to obtain medical care there. For some it maybe easier than trying to navigate the medical system which is coming to Canada, thank you Harper and his herd. People will have no one to blame but themselves.

I do feel sorry but the kids who won't be able to get adequate medical care, but hey in B.C. one in five are already living below the poverty line, and will be dying younger than they have to. The new Harper and his herd, medical system will just make it easier to keep the population down.

I keep maintaining, Harper is Americanizing Canada. We already have American police operating in Canada, exempt from our Canadian laws. As I said. Obamacare, would be similar to our health care, when Harper slashes our health care. Harper encouraged Canadians to shop across the border, even making it easier to bring back more goods. Then it was said, Canada's cost of living would be inline with the U.S. cost of living.

However it seems, I am the only one that smells a rat.

Check your math. Less than 40% of Canadians that bothered to vote voted for the Reformatories which means that closer to 20% of elegible voters chose these clowns. Unfortunately as long as those who should oppose Harper spend more time and energy attacking each other (hi libs, dippers and greens) than the Reformatories he could rule for life.

The slightly more progressive parties now find themselves in the position the Cons were before Dumbo sold out the PCs to the CRAP/Reform/Alliance assholes. Our only hope is that Harper and his minions are not only offensive to normal progressive souls but are alienating large parts of their own base - like vets, hunters and fisherman that actually appreciate conservation, even if only so their can kill stuff instead of stuff dying off because of evironmental destruction and loss of habitat and of course the real trogladites that feel Harper hasn't been busy enough making abortion illegal or mean enough to indians.

The majority of Canadians did not give Harper a majority govt. His party got less than 40% of the votes and in multi-party elections the "first past the post" system is blatantly undemocratic, resulting in the rule of the majority by the minority of voters. Also, many older Canadians do not vote for the CPC. At meetings of groups such as Leadnow which seeks democratic reform and social and economic justice, or at demos in support of environmental awareness, almost all attendees are under 30 or over 55. We older Canadians remember when we had a government that merited respect at home and abroad.

by not voting people gave him a majority. When people don't vote, they are making a decision, hence my opinion the population gave harper and his herd a majority. As they used to say, if you aren't with us, your against us. Now "being against us" doesn't mean you all have to agree, but you do have to do something, in this case, had more people gone and voted, for anyone but harper and his herd, Canada would be in a very different position. Right now the majority of Canadians voted, to not vote or vote for Harper. They all became the problem Hence, people like Haper and his herd running the country. Had there been a coalition government, we might not have had the cuts to CBC. Some Quebec parties would not have wanted less in the way of French programming. Pipelines, well can't see Ms. May agreeing. Coalitions form governments all over the world and it works quite well.

Yes it would be best if the other parties simply focused on Harper and his herd instead of each other, but each leader is so consumed with the thought of being prime minister, they forgot what they came into politics to do. There isn't any need for their to be a just one party opposing Harper and his herd, as long as there are enough of them elected to office to form a coalition to keep the herd out of the P.M's office. Seeing/hearing the other parties taking "pot shots" at each other, i.e. Liberals ganging up on the NDP to have them pay $1M for not using their postal allotments "correctly" simply plays into Harper's hands. the Liberals would have been much better off to have not participated. When you don't hang together, you all hang separately. Trudeau, the younger, might want to learn that lesson or he may find himself in third place for a long time. Come election time, the cons will aim at him and he can expect the NDP to do the same. They have no reason to do him any "favours".

You would think Alberta would have the best medical system in Canada, given their revenues from oil and gas.
Yet I've heard horror stories of long wait times at hospital emergency depts, and long wait times for surgery.

I understand they are dipping into their "Heritage Fund" just to pay the bills. Is this true?

As I recall a couple or three winters ago they were accomodating the overflow at either a childrens' hospital or childrens' wing of a hospital in Edmonton with what was essentially a canvas tent. Good thing it doesn't get cold in Edmonton.