Stephen Harper and the Day of Decision 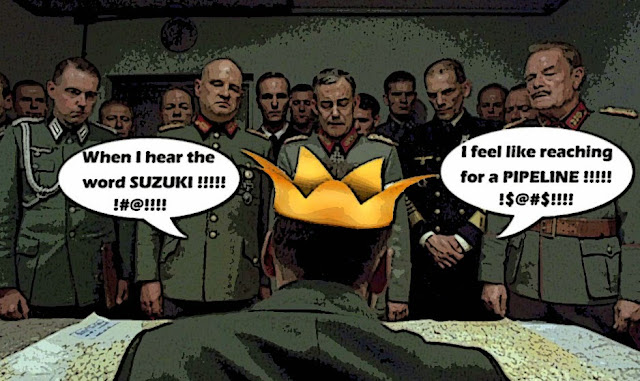 Well the day of decision is finally here. The day Stephen Harper must decide whether to approve the Northern Gateway Pipeline.

And no doubt he is psyching himself up in his bunker, by among other things reminding himself that David Suzuki was on that list of Canadian heroes I wrote about yesterday.

But of course it won't be an easy decision, because there are no easy political options.

The federal government must announce a decision on whether to allow Enbridge's Northern Gateway pipeline to proceed by the end of day Tuesday, and all three possible options have big political price tags attached to them.

The first option would be to reject the pipeline, but that isn't going to happen for obvious reasons... 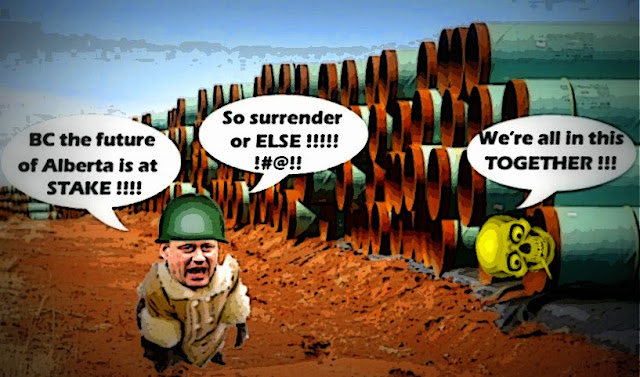 Rejecting Northern Gateway at this stage would signal an inconceivable break with Conservative policy. It would cut the feet out from under the oil industry and enrage the party base in Alberta.

And although he would dearly like to give the pipeline his oily seal of approval, that probably isn't going to happen either. Because he does have an early election to think about and winning is EVERYTHING.

Next on the options list would be to accept the NEB's recommendations and allow the pipeline to proceed, which would keep the Conservative base and the oil industry happy, but fuel a raging political fire in B.C.

So my guess is that he will opt to delay the pipeline to try to make himself look reasonable. Even if that will make him look like a hypocrite.

After demanding for years that U.S. President Barack Obama quit delaying and make a decision on Keystone XL, the irony of Harper delaying a decision on the Northern Gateway pipeline would be hard for his critics to overlook. 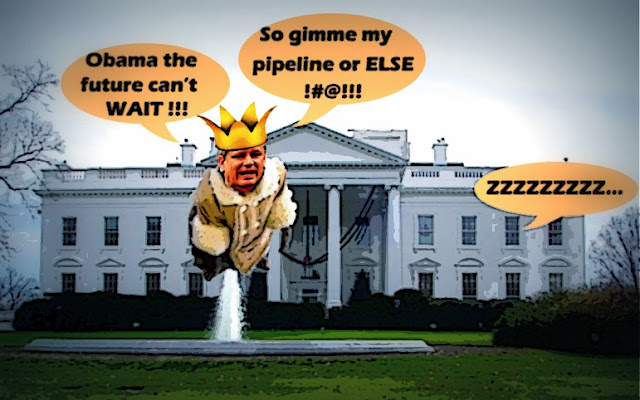 But I say I guess that's what he will do, because with an oil pimp like Harper one never knows. Especially since his propaganda machine is still pumping out the most absurd nonsense.

Like the latest parliamentary report that claims that fossil fuels are good for humanity.

A new parliamentary report released by the Conservatives touts fossil fuels as a way to improve air and water quality and expand human lifespans.

Even though, like everything the Harper government says, that too is a Big Lie. Fossil fuels are bad for the planet, bad for human health.

Bad for the economy.

While Prime Minister Stephen Harper stands firm in protecting jobs ahead of reducing emissions, the health-related costs of climate change are significant. In 2008, poor air quality alone, including from oil and gas production, cost Canada about $8-billion, according to a report by the Canadian Medical Association. By 2031, those costs are expected to rise to $250-billion, the CMA said.

And this was the view from my hammock today of the city of Toronto... 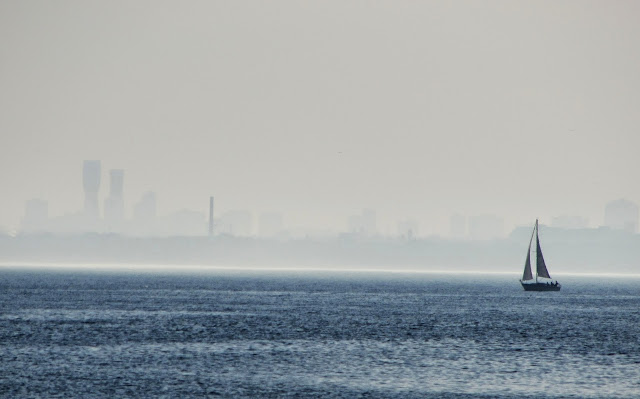 Concealed from view by a blanket of smog.

So yes, on this day of decision, as the people of BC mobilize to meet the threat.

I just want them to know that I support them one hundred percent.

It is time to do something about climate change. It is time to protect human health and the future of the planet.

And the best way to do all of that AND save our country.

Is to remove this ghastly oil pimp from office as soon as is humanly possible... 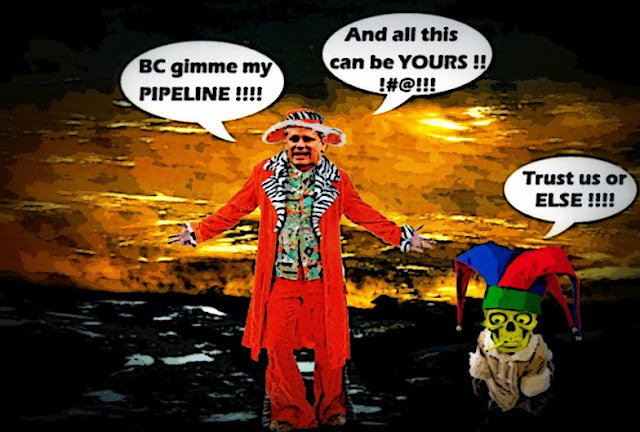 The above is one of the most disgusting things I have read in a long time, because in a narrow respect it is true while in a larger respect being absolute nonsense. If one looks at those indicators from before carbon fuels first started getting used until now, then yes, that is a true statement. HOWEVER, when one takes a look at the damages caused by such fuels to humans, land, and the planet then the statement becomes obvious propaganda. It reminds me of how marijuana was the "proven" gateway drug based on the stat that 99% of all hard drug users started with marijuana, which was true when that stat was generated, but meaningless without the statistic which showed how many people used marijuana without going onto hard drugs, which puts the lie to the first statement in the wider context despite it being a true fact in the narrow sense. This is classic CPC spin in action (at least when they don't just fabricate entirely out of whole cloth of course).

As to what Harper does today, I'm just going to wait and see, he is becoming increasingly irrational even for him and so I am loath to predict his actions outside of when he feels he is being frustrated by someone/something (where his pattern is brutally and painfully clear, as his latest attempt to end-run the SCC on a Quebec appointment appears to be going).

Many BC citizens signed the FN peoples petition against, the tankers and the Enbridge pipeline. The FN women are crocheting a line of hope, to stretch across a part of the Channel. Most of the citizens of BC are supporting the FN in their battle, against the massive Chinese tankers in the channel. The FN people are doing this, for all of us.

Harper rips into Russia for their annexation of the Crimea. However, Harper says nothing about China doing the, exact same damned thing. China comes into BC and takes our resources and the resource jobs. China will take all of the Northern BC mining jobs. The BC miners want the Chinese miners removed.

China is after BC's ancient forests. Another mill shut down in BC because, of no timber. Freighter after freighter sails over to China with BC's raw logs.

It is even said? Petro-China put in a bid to *help* build the Enbridge pipeline. No doubt with their own cheap labor. Christy Clark works for Harper, as Gordon Campbell did before her.

No-one I know wants China on our Canadian soil, what-so-ever. China now wants, their history and culture taught in our schools. Our schools are set up for Canadians. If China doesn't like our schools, they can leave. China fouled their own country with horrendous pollution. We don't want China over here, to do the same thing to Canada.

There is one easy solution, semi adopt PET's national energy stragegy, take half the budget for fluffers at the PMO and build a refinery right at the sands. Only make diesel to keep the costs down, then pipe that redefined carbon around.

I see Steve has punted on the F35 expect the same here.

I remember reading that every drug addict in Canada started out on milk.

It's been a while since I heard that one, but in 47 years of life I have heard just about everything on that point. Indeed, I have my own copy of "Reefer Madness" both for the laughs and because this really did inform the discourse for decades as a "serious" concern. I started debating legalization of marijuana in late Elementary school debating society and always ended up taking the pro-side because it made much more sense to me than the prohibition model given what was medically known at the time, especially after the Le Dain Commission here in Canada did such excellent work debunking the worst of this stupidity. I have been pro-legalization and regulation in the same manner as alcohol since well before I was old enough to legally drink, and nothing in my 28 years since hitting legal age has changed my mind, only further entrenched the wisdom of this approach to this issue.

Marc EMERY !!! AND JUSTIN!!!.....HOPEFULLY THAT little bastard oil Manchurian candidate goes and gets a real job, where they will appreciate his dictatorship.
\cheers and f%#c harpies

hi Scotian....yes I agree, the claim that fossil fuels are an economic and environmental blessing is simply outrageous, a sign of desperation if ever there was one. But then we have a Prime Minister who keeps repeating the Big Lie that the NDP has proposed a "job killing carbon tax" when it hasn't. According to the moral standards my parents raised me to believe in, that alone makes him unfit to remain in office. As for whether Harper will remain in office, these days I'm inclined to believe he will resign before the next election. The writing is on the wall, but can he see it?

hi Steve...if we had a national energy strategy Canada would be a lot richer than we are now. Most serious countries have one, and a national oil company. But we are a banana republic so we don't...