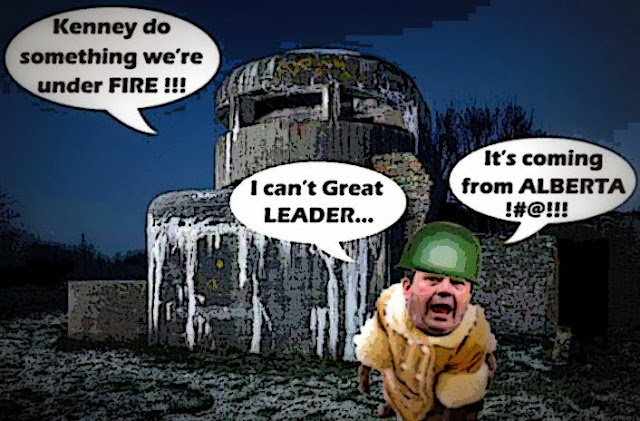 Uh oh. It looks as if the Cons have been forced to retreat to their wartime bunker.

For not only are they trying to dodge the flak over their decision to approve the Northern gateway pipeline.

They are now coming under fire because of their efforts to fix the Temporary Foreign Workers Program.

And what must be driving them absolutely crazy with fear, is that the heaviest fire is coming from Western Canada.

The federal Conservatives are suddenly playing defence in the western strongholds of Alberta and British Columbia amid rising tensions over two divisive decisions – the crackdown on temporary foreign workers and approval of the Northern Gateway pipeline.

Including their beloved province of Alberta.

All three men vying to become the next Alberta premier, including front-runner Jim Prentice, complained during a debate Saturday in Grand Prairie that Ottawa is unfairly punishing the province with its move to restrict the use of imported foreign workers.

Their friends in our grubby business class who profited from the foreign slave trade aren't happy either.

“The Harper government is not known for bowing to public opinion, but they have on this issue,” remarked Dan Kelly, president of the Canadian Federation of Independent Business. “They have stood strong on issue after issue, where they have dug in and held their ground. On this issue, they have caved fast and caved hard.”

Not when it was the pimp Jason Kenney who got them hooked on cheap labour.

And other Canadians are going to be absolutely furious, when they discover that the Cons have been dragging their feet on the question of foreign worker inspections. 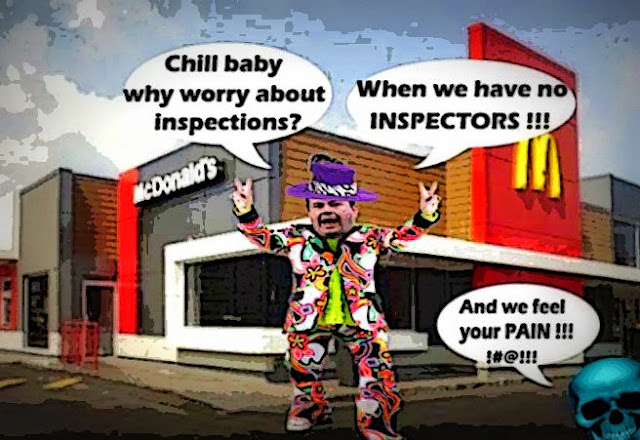 Not one Canadian employer of temporary foreign workers has been inspected to date despite a Conservative government promise to do so during last year's initial overhaul of the controversial program.

They haven't done anything. There aren't enough inspectors. The Cons are only adding 20 more. Which will bring the total number up to 60, in a country flooded with more than 300,000 foreign workers.

And everything that bloated blowhard Kenney has been claiming to do, is just another BIG LIE...

Which will make everything he says he will do now, look like just another Con SCAM.

And the best news? The Cons are caught in a crossfire. They can't please most Canadians without damaging their own base.

And we are going to keep the heat on, by scouring our neighbourhoods for businesses employing foreign workers. And reporting them not to Kenney, but to our own MPs.

So they can keep asking embarrassing questions all the way to the next election.

Because as you can see the Cons are desperate. They know this is the issue that can KILL them.

And if we pour gasoline on the flames and shout out:

Stop flooding us with foreign slaves, stop stealing our jobs, stop hurting our children, stop stealing the food off our tables, you sellouts, you filthy scummy TRAITORS !!!!!!!

It can still be the issue that will finally destroy them... 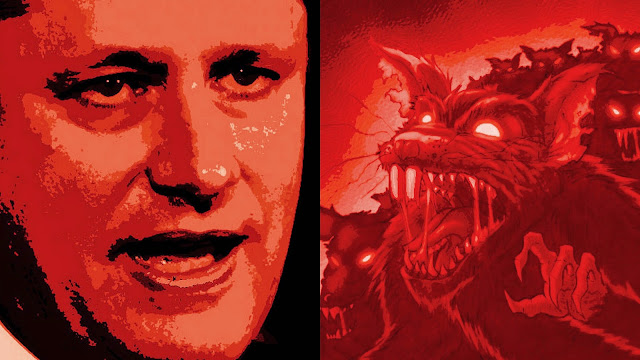 Dan Kelly and Jason are staging a pillow fight. As the guy from McDonalds assured his franchisees when the CBC broke the stories on the Canadian workers displaced through the program: "The Minister gets it." Though Jason was genuinely pissed off over the publicity generated by the leaked teleconference, I'm sure that he still "gets it". The CFIB has no doubt received private assurances regarding the future of the program. We are now witnessing theatrics.

The TFW program will not cease. Harper works for the, oil and gas barons, for the mining and as we can see, gasoline through the roof, heat and hydro a rip off, the forestry business is a huge rip off, for the mills and people in BC. Harper has also been, sneakily working on the TPP. This is said to be another corporate give-a-way which, gives the corporate giants, a hell of a lot more power to steal from the citizens. As Kenny and Harper have more and more foreigners trained, for the resource sector? More and more Canadian resource workers, will be laid off.

Every Minister Harper feels as a threat, have seriously undermined themselves. MacKay's stance on the Chief Justice and now, his stance on women Judges.

Canadians had thought Jason Kenny, would make a decent Canadian PM. Kenny now has citizens, dead set against him for permitting the TFW, to take Canadians jobs. And, we certainly recall, Oliver, Toews, Calandra, Brad Butt, Souda's and many, many more of Harper's cabal that have no self respect, what-so-ever.

There are Canadians who boycott fast food outlets, that have foreign workers employed.

Just when you think? Harper and his cabal couldn't possibly get any lower, they do.

I am in agreement with those that say its alot of sound and motions signifying nothing. The program will go forward more or less as is. Many Straw men will die, but at the end of the day, we will still have temporary foreign workers flying combat missions for the RCAF. Is that part of our proud tradition?

Harper knows Jason Kenny and John Baird are not serious threats.
We will not see a Gay leader of the PC in my lifetime. Not that I suspect the PC party of Canada is full of self loathing Gays.

hi John...I thought about mentioning that in my post. Because it would be the way they it would be orchestrated. They would tell the fast food slave industry to squeal like stuck pigs to make ordinary Canadians believe Kenney was putting the in their place. While whispering in their ear, we only have 60 inspectors, so your chance of getting nabbed is about as good as winning the lottery. But since the CFIB has become so spoiled and so aggressively pro foreign workers, I think their anger is genuine. But the bottom line is that because there are so few inspectors and so many places that employ foreign workers, this scandal will haunt the Cons all the way to the next election...

hi anon....you're right, the Cons aren't about to kill the program, even though even Kenney now admits that it has been depressing wages, because too many now depend on it, and our corporate class has no sense of loyalty towards its own people. In previous posts I have advocated boycotting companies that use foreign workers when they could use Canadians if they paid them a living wage. I still think it's a good idea, but reporting them to MPs or the media could be even better. Because it can help ensure that the issue remains in the news and hurts the Cons in the next election. And yes, just when you thought the Con regime couldn't sink any lower, somehow it does...

hi Steve...as I pointed out this is an issue that politically speaking the Cons can't win. But they are desperate because they know that the issue is a potential killer so it will be interesting to see them stumble through that swamp. And yes I saw the RCAF story and I wrote a post about it last night...

there is a nice way around the temporary foreign worker "problem" for the Cons and their friends. Its in the Free Trade agreement with the Americans. It provides for American corporations to bring in their own American workers if it is deemed they have "specialized" skills. No one questions them on that, except the locals who don't get the jobs. (happened in Northern B.C. around Terrace/Kitimat)

A couple of years go the City of Edmonton was advertising in the U.S.A for workers to come to Canada, to work in the oil fields. The target group for these jobs, American Veterans. Well they are less likely to Unionize, and more likely to pick up a gun, if the employer requires that.

The TFW is dead in name only. Kenney has created a new program, the "Intra-Company Transfer Program.
"This one is called the Intra-Company Transfer program (ICT). Foreign workers imported under it do not have to satisfy any of the conditions Kenney imposed Friday.
Employers who want to bring in ICT workers don’t need to first obtain so-called labour market opinions from the government. That means they don’t need to prove a dearth of qualified Canadians.
Nor are they required to pay a hefty $1,000 fee per foreign worker.
Nor is their ability to hire foreigners linked to the local unemployment rate.
All they need do is claim that the workers they are importing are managers, executives or employees who possess “specialized knowledge”".
http://www.thestar.com/news/canada/2014/06/24/how_canada_lets_employers_avoid_temporary_foreign_worker_reforms_walkom.html

So those hungry for cheap, foreign, labour will have ample access to it completely unhindered by the former TFW guidelines and requirements.

I can only hope that as the nation heads into an election year, where jobs are one of the most important items on people's minds, this crucifies Kenney, Harper, and the rest of the thugs in the Con party.

Along with our uncontrolled immigration( 285.000 ) up from our previous year over year 250,000 per, mainly from the third world not only are our jobs been taken away from within our own boarder, but also our culture, sense of country, pride. Being forced out of our cities because of massive ethnic occupation etc. we are witnessing the destruction of Canada. Cultural Marxism, white genocide, all this without any consultation or permission from the Canadian people as to what kind of country we want. We are currently experiencing racial and cultural replacement, everyone needs to wake up because it already too late, we have past the tipping point. We let them get away with this new world order plan. Is our country not worth fighting for?