Stephen Harper and the Republic of CanAlberta 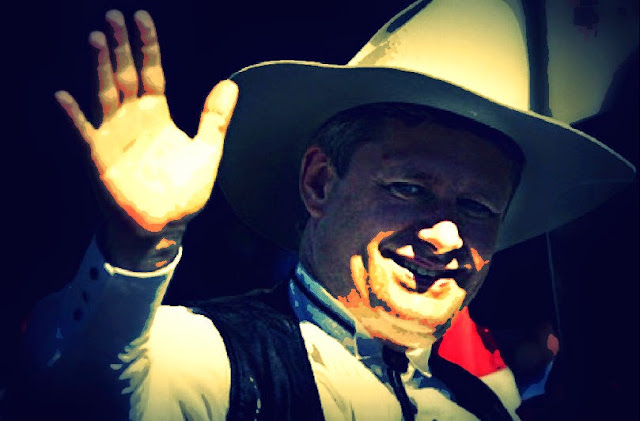 It's one of the oldest and best known pictures of Stephen Harper. The Toronto nerd dressed up as an Alberta cowboy.

The one who fell in so much love with that province, he tried to put a firewall around it.

But it turns out that picture couldn't be more prophetic.

Because when it comes to the economy, as far as his foul Con regime is concerned.

There's Alberta, and then there's everybody else.

Looking deeper into last Friday’s jobs numbers, BMO’s Benjamin Reitzes says the Statistics Canada report “reinforced that the Alberta economy is in a league of its own.”

Because that's what happens when a bunch of Con oil pimps favour one province, over all the others.

“Six of 10 provinces saw employment drop below year-ago levels, including all five east of Ontario,” he added. “Alberta’s energy sector continues to suck in workers, while the rest of Canada battles slowing domestic demand and the legacy of a strong loonie and weak productivity.”

That's what happens when you kill off good jobs with the Dutch disease, leave the rest of the country mired in unemployment...

Or as I wrote last night, struggling to survive on lousy low wage jobs in a part-time Canada.

While the Cons keep favouring Alberta, like Jason Kenney is doing with his flawed income splitting plan.

Employment Minister Jason Kenney says the Harper government has no intention of backing away from its income splitting pledge, despite a new report concluding the plan would exacerbate income inequality and bestow the most benefits to the West.

The report by the left-leaning Broadbent Institute concluded that income splitting would benefit the most affluent single-income families, cost about $3 billion, bestow no benefits to 90 per cent of Canadians, and transfer a disproportionate amount to families in Alberta and Saskatchewan, Conservative strongholds with the strongest economies.

When he isn't bringing in foreign workers to steal the few jobs we have, and drive wages down even further.

And all I can say isn't it time Canadians asked themselves whether they elected Stephen Harper the Prime Minister of Canada?

Or the insane President of the oil republic of CanAlberta.... 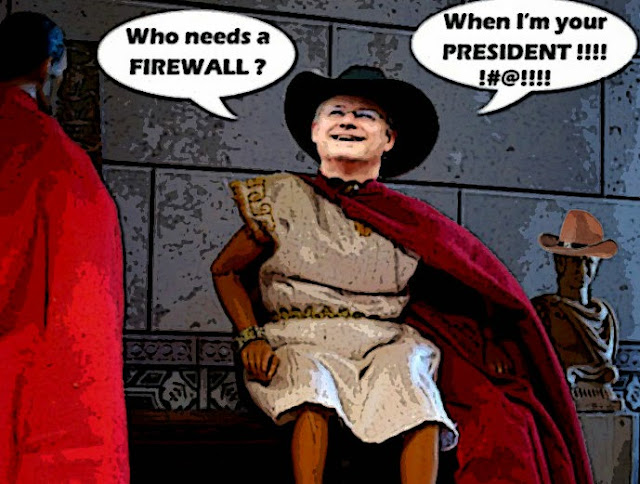 Because let's be absolutely clear eh? This is a formula for the destruction of this country.

We can use the resentment that is building over this outrageous situation to do the Cons enormous damage in the next election.

For there is nothing like good old regional alienation to get Canadians going. And now it's OUR turn.

We shall pour gasoline, or bitumen, on that fire until they can see the flames in Calgary.

We shall target the Republic of Canalberta.

And use it to bring down Great Cowboy Leader...

And no better time to start than tomorrow. If you think Wynne is a jerk-if you hate what mcGuilty did to this province-vote for Wynne anyway because this time around, an NDP vote is nothing but another spoiler vote that could have kept whodat from setting Ontario up for a real catastrophic/privatization economic crash which is exactly what harpie and whodat want. horwath lost my usually NDP vote when she cozied up to and continues to cozy up to whodat. She needs to cross the fucking aisle if she thinks like that and have the courage of her own convictions and declare herself a CON instead of hiding in the political closet. I won't enjoy voting Lib this time but I most assuredly will vote strategically for Wynne to keep whodat and horwath from trashing this province even worse than the Libs do.

Harper does not want jobs for Canadians. If he did, he wouldn't give our resource jobs and other jobs, to cheap foreign labor. Harper is a fascist dictator and has been, right from day one. There is nothing beneath Harper and his so called Conservatives dignity, they won't do to win.

Consider, the Campbell/Clark BC Liberals work for Harper. Ex BC Liberal Premier Gordon Campbell was rewarded the post as, High Commissioner to the U.K. Campbell did a lot of underhanded work for Herr Harper.

Both Ontario and BC have suffered hydro rip-offs. Gordon Campbell even thieved and sold BC's rivers. BC Hydro is forced to buy the rivers hydro, even when they don't need it.

Christy Clark also works for Harper, as Campbell did before her. Perhaps the Ontario Liberals also work for Harper?

still . . . better Wynne than whodat, the rabid beaver and hordat, the girl with the patent leather hair. If you think whodat and hordat aren't going to economically lay waste to and privatize this whole province within 3 years of having climbed into bed together, should the CONS win out, you are truly delusional. whodat wants to dump 100,000 good jobs right away (like teachers and firemen) so he can claim a "qualified labor shortage" and turn Ontario into another minimum-wage province like clark has done to B.C. Fuck that!

As I said before, the best tribute the Cons could give Jim Flaherty would be to cancel their pledge for income splitting, which would only benefit a small percentage of Canadians. Last February, Flaherty questioned the fairness of it. Even according to the C.D. Howe Institute (a right-wing think tank) 85 per cent of Canadian households would gain nothing from income splitting:

And the Canadian Centre for Policy Alternatives (left-wing think tank) said 86% of families would gain no benefit whatsoever from this tax loophole:

What Harper wants is profit for fossil fuel industry, to make Canada an "energy superpower" by selling off dirty energy to nations trying to clean up their environment.

In that quest for profit comes low wages, no unions, no benefits. Cheap labour filled by Canadians or immigrants, he doesn't care, to do the work and secure his own future and that of his industry buddies.

We tend to read a lot into Harper's "madness", his "evil", but that's because we are people who have emotional responses, and care about our world and other people. Harper simply doesn't care. He is lacking empathy and believing the ends justify the means. To him it's simple - Canada is a pile of resources to transform into piles of money for industry execs. It's a binary world to his mind.

His madness and temper is sociopathy and anger at people not thinking the way he does. I don't think he schemes and connives ways to make life suck for Canadians, he just simply does not care, he is dead inside.