The Con Regime and the Honey Bee Apocalypse 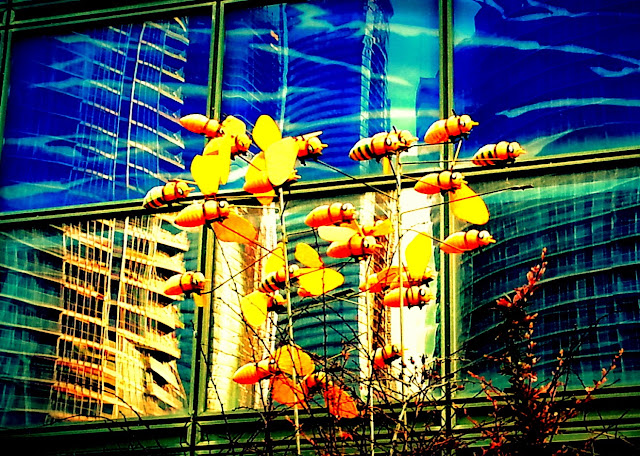 In the garden of a waterfront theatre not far from where I live, there is a little band of bees.

They've been there for years, and time and the elements have taken their toll. Their colours have faded a little and some of their wings have fallen off.

But they're still in better shape than many of the real bees, who are being killed by human greed.

Because now it's official, they are being poisoned by pesticides.

Scientists want two commonly used pesticides banned around the world for helping cause the mass deaths of bees and harming the planet's ecosystem. A panel of independent scientists, operating as the Task Force on Systemic Pesticides, found the pesticides neonicotinoids and fipronil are harming the environment, posing a similar threat as DDT did in the 1960s.

But even though it's obvious what's happening to the tiny pollinators, and has been happening for years. And even though we can't live without them... 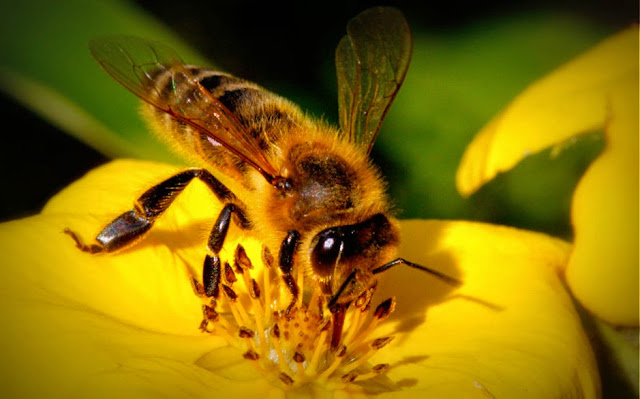 "Seventy-five per cent of the crops that we eat are pollinated by insects of one type or another — mostly by bees," said professor Dave Goulson, one of the report's authors.

Not everyone supports the idea of a ban on neonicotinoids. CropLife Canada, a trade association that also represents developers and distributors of pest control products and plant biotechnology, opposes a ban saying the varroa mite is the primary culprit behind declining bee health. It says there is no correlation between pesticide use and bee health.

And needless to say so does the Con regime. And the hapless Rona Ambrose... 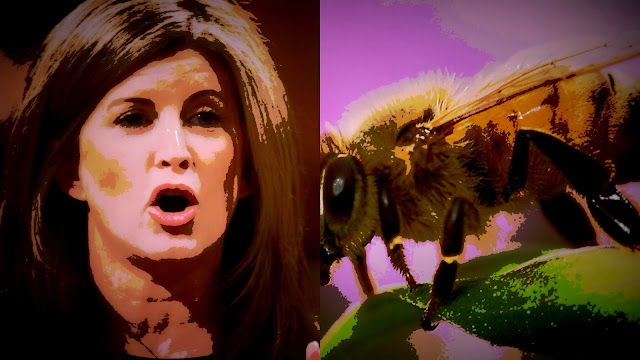 "We are constantly absorbing new science and reassessing. If there is a danger to Canadians, then we will act further," she added on Tuesday at an event in Toronto.

Because they will deny scientific reality, and they won't do anything to save the bees or fight climate change, if it puts the slightest dent in Big Business' insatiable greed for ever greater profits.

Even if they destroy the planet, and our fragile ecosystem.

"Far from protecting food production, the use of neonics is threatening the very infrastructure which enables it, imperilling the pollinators, habitat engineers and natural pest controllers at the heart of a functioning ecosystem."

And even though the bees are dying in plain view. 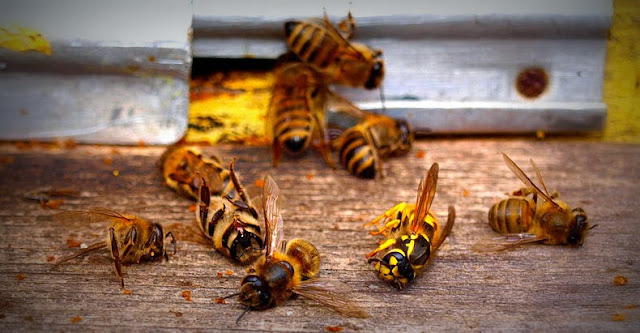 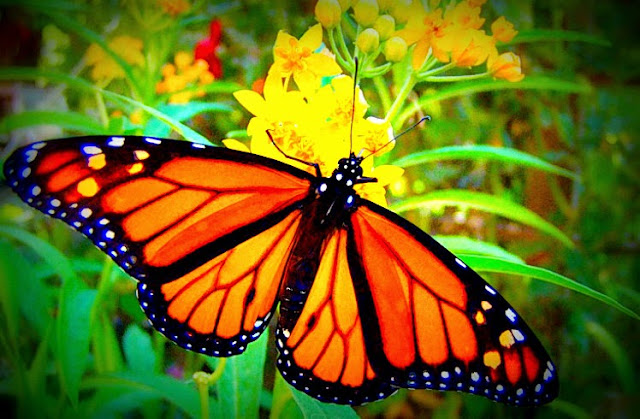 Who in the fall used to be found by the hundreds, even thousands, on the island near where I live. Working the flowers with their tiny competitors the bees.

Or turning the trees orange... 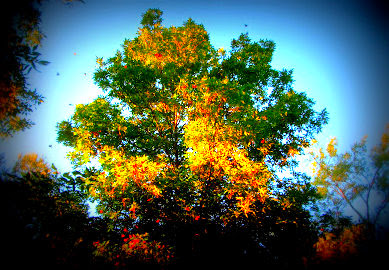 When although I had planted the biggest patch of milkweed ever, the plant the Monarchs depend on to survive, nobody came to visit.

Because those little pollinators are also being killed by human greed. Poisoned by pesticides, or deprived of the plant they need, by those who would clear milkweed from the fringes of their fields, to extract every last millimetre of profit.

Oh well. This year, I cleared the milkweed patch again, and I'll be hoping for the best.

But I really wonder whether I'll ever see them in all their glory, like I did one late summer afternoon only two years ago...

But what I do know is this: if we don't defeat the life denying Con regime, nothing will be done to save the planet.

And if we can't save the bees and the butterflies.

We will not save ourselves...

I am reading 2312 right now. We banned DDT for far less economic reasons, I guess they have better lobbyist today.

Simon how many species can die in our biosphere before it becomes uninhabitable. That is the question but the people in control who are rich beyond the imagination have no imagination when it comes to killing the planet.
This bee death is a case in point. Nothing proven by panels who know where the next paycheck comes from. However overwhelming evidence its the nicotine killing the bees. What will it take to wake people up. Destroying the food supply should be one of those things?

Interestingly I recently ran into the ranting of an idiot who considered Rachel Carson a villain and thought the banning of DDT was a mistake. I'm starting to wonder if maybe I, like the Cons - but for different reasons, am beginning to NOT believe in evolution. I mean really it often seems as if the human race is getting dumber, greedier and more evil......more like some form of devolution or a species undergoing some kind of degradation process. Evolution implies a gradual improvement of the species as it adapts to its environment, we seem to be going the other way.

I dare say pretty well any other species of organisms would do a better job of not destroying the planet and if we, as seems likely now, end up making ourselves extinct, we won't be missed by any other species unless there are parasites who can't manage on other mammals.

by the time big business and harper's herd figure it out, the bees will be gone, along with the profits big business has been able to make. For people such as them, it is all about the here and now and fuck the future. if we keep it up at this rate, there will be no future.

" if we keep it up at this rate, there will be no future."

There will be a future, we just most likely won't be around to fuck it up anymore! The dinosaurs were killed off by a major meteor, or so goes the current thought, and weren't not at fault. We won't need a meteor to finish us off, we're doing a fine job all by ourselves.