The Ontario Election and the Never-ending Con Nightmare 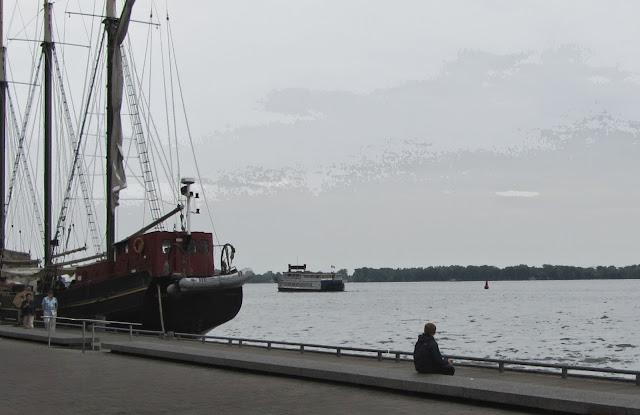 It was dull grey rainy Sunday on the waterfront where I live, but at least it gave me a chance to collect my thoughts, wonder what is happening to this country I sometimes no longer recognize.

And of course try to figure out who the hell I'm going to vote for in the Ontario election.

Because with only three days to go before voters go to the polls it's crunch time in the Big O.

And it has been the weirdest election I've ever seen. 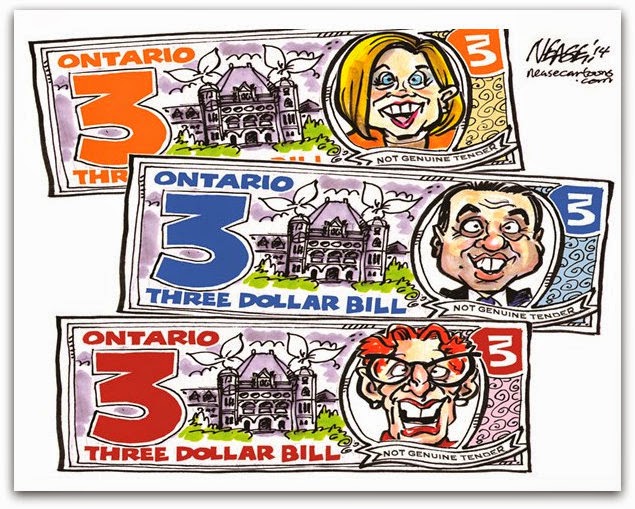 With the NDP tacking to the right to try to steal votes from the Hudak Cons.

And the Liberals tacking to the left to try to steal votes from the NDP.

Kathleen Wynne says she’s “afraid of Tim Hudak” and the only way for left-wing voters to stop him is to abandon the NDP and rally behind her.

Leaving me, who like most people in this province needed an election at this time of the year like I needed a hole in the head, feeling like I'm being held hostage by both parties.

Or trapped in a never-ending Con nightmare.

And above all wondering why is the brutish tea bagger Tim Hudak STILL standing ????? 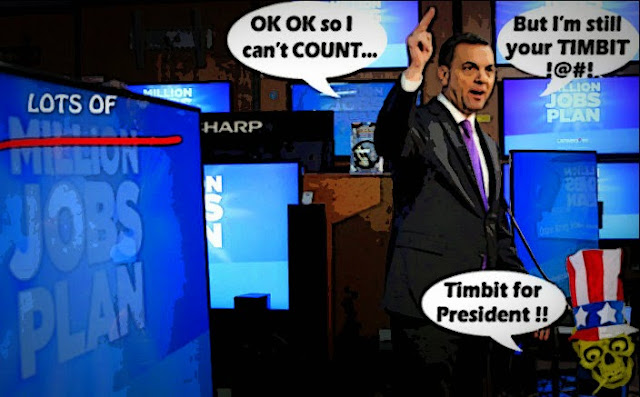 After having his Million Jobs Plan, the one that was hatched in the ghastly incubators of the Koch brothers, blown to bits by one economist after the other.

Why is he still refusing to admit he was wrong? Why won't he admit that he just can't count, and that his plan to create jobs by killing them might finish off Ontario.

And plunge the whole country into another recession.

Why is he still peddling that scam like a con artist?

On Tuesday, he said he was sure of his math (partly because his father made him do math problems in the car on road trips, which “explains why I’ve got this background in economics”).

Or a faith healer.

By Wednesday morning, he was speaking with theological certainty: “I stand by my numbers. It’s going to create the jobs that I say.” “I know I am right.” 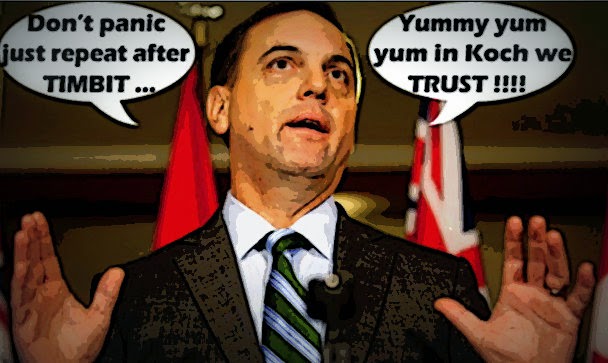 Or one of those American televangelists who claim that if you buy their Miracle Spring Water you'll get a cheque in the mail.

And why after that shabby show, and his obvious limitations, and the fact that his platform was Made in America by some of that country's most reactionary elements, would the Globe's editorial board endorse Hudak?

Or not recognize that this shouldn't just be a pathetic caveat:

Mr. Hudak is also running on a platform of simplistic slogans. The Million Jobs Plan has been rightly mocked for failures of basic arithmetic. The promise to cut 100,000 government workers contains some reasonable ideas borrowed from Don Drummond’s Liberal-commissioned report on right-sizing government, but the rest is just about offering a nice round number for campaign purposes. The pledge to cut red tape by one-third is similarly just a slogan, not a plan to govern. The Tory platform is about signalling to the electorate that they are erasing the “progressive” from Progressive Conservative.

It should be grounds for declaring him unfit to hold office.

But then doesn't that tell you how low we have fallen? Or how old, tired, and mediocre our politics have become.

Oh well. What all of the above tells me is that I'm going to have to vote for the progressive party that has the best chance of winning the riding.

As well as doing my best to encourage my friends and neighbours to get out and vote.

Because when you hold an election nobody wanted, turnout could prove decisive.

And all that counts is stopping Hudak... 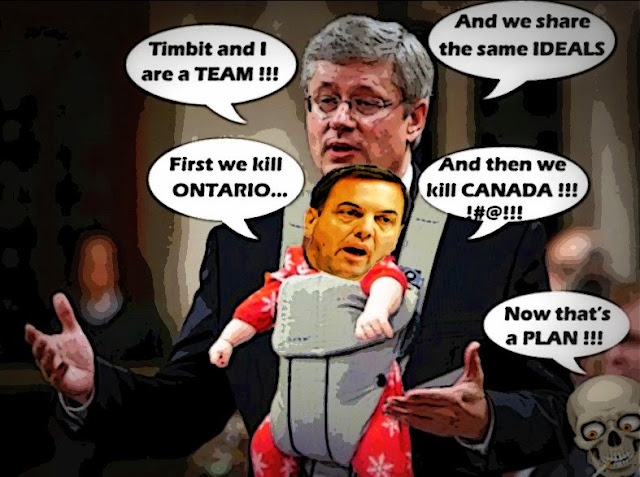 For if he is elected he WILL help Stephen Harper finish off this country.

Let there be no doubt about that.

You know, sometimes I wish I didn't spend so much time moping about politics in this hideous Harperland, where hope goes to die.

And could spend more time with my idiot friends talking about other not so important things... 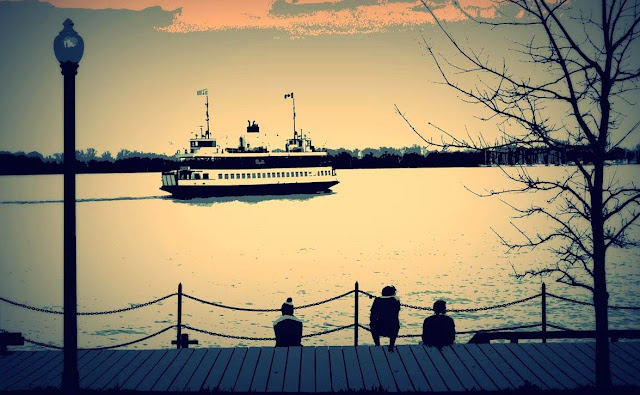 Like the soccer World Cup that begins on Friday, the day after the election.

Or who is getting laid and who isn't?

All I can think about these days is what is happening to this country? The one I love so much but can't recognize any longer.

When will this never-ending Con nightmare finally be over?

And where the hell are we going?

What a Conundrum indeed.

Horvath pulled the trigger and I'm convinced she did it as a result of 'peer pressure' as all of the Con commentators were chiding her for supporting the 'gas plant Libs'.

I am sure more people in Ontario spent more hours on Orange is the New Black last weekend than the provincial election by a factor of a quadrillion.

But what if we were voting in cast members?

Tim Hudak, my first instinct is to say pornstasche, but he does have a lot of crazy eyes going on.

Kathleen Wynne- 100% Red, she hates all the shit she has to accept to cook a great meal, but still takes deliveries daily.

Andrea Horvath - Piper. Which team am I on, people like me they really like me even though I have made terrible decisions.
http://thinkingaboot.blogspot.ca/2014/06/edge-of-tommorw.html

Check your dates on the World Cup. I think the first game is 2014-06-12 (Thursday) and broadcast at 17:00 EST so it may have an important effect on voter turnout in some ridings. Also should be good game.

jrkrideau certainly has an interesting comment. never thought of that, but it may well turn out to be a factor in the election.

Horvath doesn't deserve to be elected. She started this mess. Why? She most likely thought she personally had a chance to become premier. its about power and greed. Now she maybe the one responsible for Hudak becoming premier. Wonder how the NDP are going to like that one? Didn't Horvath have a look at the bigger picture in all of this? Most likely not.

If Hudak is elected and he starts destroying Ontario, like Harper has Canada and Christy Crunch has B.C., those who voted for Hudak will have only themselves to blame. They might want to find some other place to live if Hudak is elected.

hi anon...yes it is a conundrum. I don't think Horwath should have pulled the trigger. She could have waited a little longer and seen if the Liberals were serious about their very progressive budget. I can say that it's probably the worst time to hold an election, and her whole attack on Wynne can only play into Hudak's hands. But yes, the idea of a Hudak government really is frightening...

hi Steve...judging by the number of signs in my neighbourhood, this election is a total bust, Advance polling is down by six per cent, and if the turnout is low it will favour the Hudak Cons. However, I plan to go door to door in my neighbourhood, urging people to get off their asses and vote. It's pretty hard for me to look menacing, but believe me I will try... ;)

hi jkrideau...Golly. Thank you for correcting me. The first game is on Thursday between Brazil and Croatia. And you're right it could definitely get in the way of people voting. Fortunately my polling station is just across the street from where I live. So even if I haven't voted by then I can do it during half time... ;)

hi e.a.f...yes jk is right, especially if the opening ceremonies are before the game. And it's just the latest problem in the timing of this election, which Horwath never should have triggered. I don't doubt that she is a decent person, but she's definitely not the kind of progressive leader I could support. We don't need right-wing populism, we need new and creative ideas, and as far as I can see she has none...