The Con Hookers and the War on the Supreme Court

I suppose it's only fitting that it should be Peter MacKay, the one who pimped the Progressive Conservative party to Stephen Harper and his Reform cowboys, who should make the announcement.

And that the hooker regime that would do ANYTHING to win or steal an election, should be the one to re-criminalize prostitution.

The federal Conservative government will try to abolish the sex trade by targeting “johns” who purchase sex and anyone else who profits from or advertises the sexual services of others, all the while trying to persuade prostitutes to quit selling their bodies.

Despite the government’s claim it wants to protect vulnerable women and target only at those who profit from victimizing them, the Conservative bill takes aim at prostitutes, too, depending on where and how they practice their trade.

For only the Cons could produce a new law that is worse than the one the Supreme Court struck down.

And would make the lives of sex workers even more dangerous.

All this will have a “devastating impact on sex workers’ safety,” warns Katrina Pacey, a lawyer for Pivot Legal Society which has campaigned for reform in this area. More women will end up working in the shadows, be slapped into jail, go missing or be murdered, she told CBC News.

The new law will force prostitutes to work in isolated, unsafe areas to avoid any possible risk of coming across a youth. Clients won’t want to come to relatively safe indoor locations, knowing that the police may be parked outside, trolling for johns. So they’ll demand that prostitutes jump into their cars without having time to screen them or meet them in isolated places. That will leave sex workers with even less access to police protection.

But then of course, there is method to the madness. Because this isn't just another attempt to pleasure their rabid religious base.

It's also the latest chapter in Stephen Harper's war on the Supreme Court... 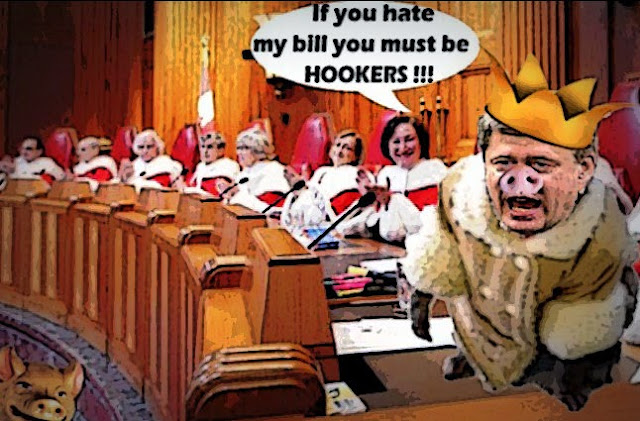 For he must surely know that this law will be challenged in court, like so many of his reactionary crime bills have been.

And there is nothing he would like more than to pit Canadians against the Supreme Court in a federal election. Claiming he's trying to keep criminals out of their homes, and prostitutes out of the playgrounds, but those liberal judges won't let him.

Because why do you think he would drag children into this story?

But then that's the kind of depraved leader he is, his vindictiveness knows no end.

And I wouldn't be surprised if hanging the sordid issue of prostitution around the neck of the hated Chief Justice is for him the next best thing to a sexual thrill.

Especially since he never answered the dominatrix's question... 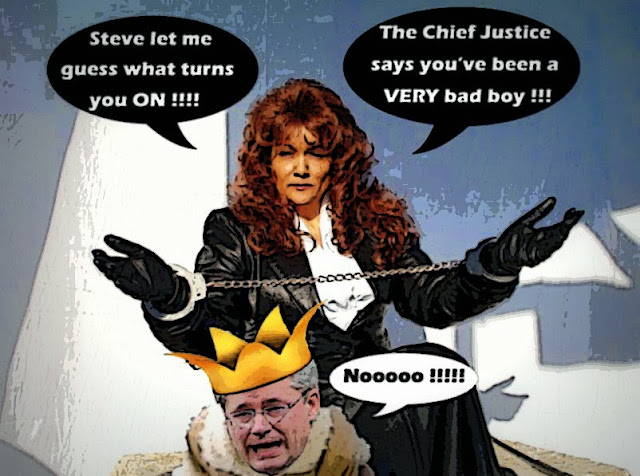 Thank goodness. Because ever since I heard him ask a female reporter whether she liked handcuffs, I'd rather not know eh?

But he is such a hypocrite, that he would bring the state crashing into the bedrooms of the nation again, or invade our privacy with his foul so-called cyber-bullying bill.

After claiming he was defending the privacy rights of Canadians when he gutted the census, and scrapped the long gun registry.

And how is that working out for him I wonder? 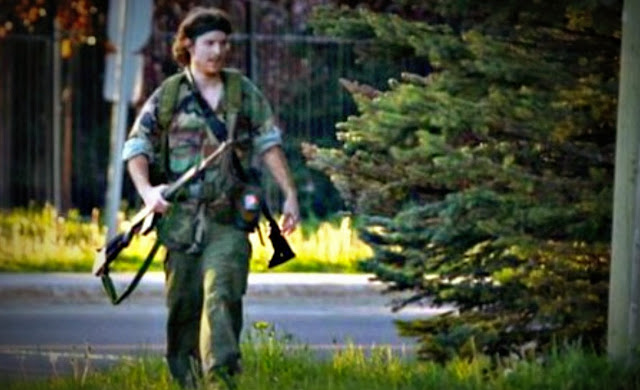 Three RCMP officers were shot and killed and two officers were injured in Moncton, N.B., as the Mounties conducted a manhunt across the city’s north end into the early morning hours of Thursday for a 24-year-old man who they tweeted a photo of wearing military camouflage and carrying two rifles.

But then he crazy, he is desperate, and he is DANGEROUS.

He has no respect for harm reduction.

Or for murdered or missing aboriginal women.

Last week, while aboriginal demonstrators were marching outside the Centre Block on Parliament Hill, New Democratic MP Niki Ashton rose in the Commons and asked the government — again — to convene a national inquiry to provide answers and justice for the families of missing and murdered aboriginal women. What she got from the country's justice minister, Peter MacKay, was a patronizing smack down.

And neither does his hapless stooge Peter MacKay.

And really, what more can I say when i'm living in a grubby red-light nation like Harperland?

Except please, please, in the name of human decency.

Do what you must to defeat them.

And arrest those Con hookers... 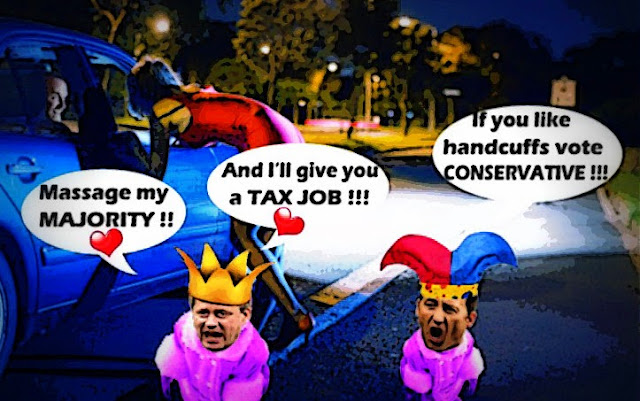 APTN had representatives from the 3 major parties on. It was most entertaining. The Cons pimp was going on about what a great piece of legislation it was. Couldn't stop laughing when he got to the part of the Cons spending $20 Million to get people out of that line of work. geeze h. Christ on a stick where have these idiots been. That wouldn't even be a drop in the bucket out here in B.C. Guess those Cons just don't know how much it is to get a blow job out here in b.c. Don't they know how low welfare rates are in Canada. That is why many sex trade workers are in the sex trade. Don't expect them to give up the sex trade for living on $700 a month. Welfare for an adult and one kid is $1,200 per month. Working the sex trade pays more. $20 M. isn't going to cover anything. It wouldn't cover a decent income, or provide detox or after care. Where they get these figures from is beyond me.

Women and men have been on this earth for a very long time. lThey don't call the sex trade the oldest profession for nothing. It will not be stopped. even China can't stop it. So here are a few suggestions. If a person is mentally competent and 19 yrs of age and older then its legal. The government might want to use some of the existing laws to deal with slavery in the sex trade. Of course they'd have to hire a few more people to work that one and the Cons aren't going to spend any real money on that.

Not being able to advertise is going to get a lot of people killed. Right now a lot of women use ads to get business. it also enables them to avoid pimps. going to jail for advertising is simply going to clogg the jails. (what happend to freedom of speech?) Lets see how many sex trade workers are there in B.C. and how many of them advertise????? Na, the jails can't hold all of them.

Now there are a lot of old whores sitting in an old building in Ottawa, perhaps some of them should go to jail first. Its not blow jobs they're handing out, they're just blowing smoke. O.K. got it and they get a nice big pension when they go home. It would be nice if they included in their new law, if an M.P. gets caught with a hooker, the M.P. goes to jail for 5 yrs and no pension. I'd sure like to know how many of those Con M.P.s and those who finance them, have used the services of a sex trade worker

hi e.a.f....that Con bill is a total abomination. It makes the lives of sex workers more dangerous, and as I mentioned in my post, it's a slap in the face of the Supreme Court. Although I haven't studied the issue, I think the best thing to do is license and supervise the business, so minors can be kept out of it, as well as pimps and other abusers. More money should be allocated to provide alternative ways to make money, to try to encourage as many sex trade workers to leave the business. In short, we need to use the principles of harm reduction and our Canadian values to be both smart and human...