The Sad Bromance of Stephen Harper and Tony Dumb Dumb 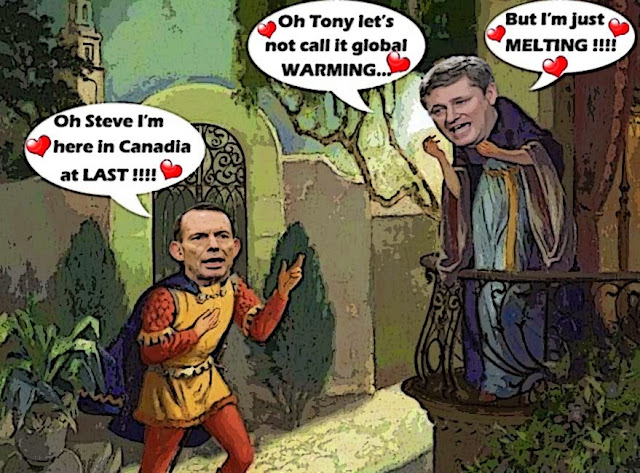 Well as you may remember, a few days ago I wrote about Tony Abbott's visit to Canada, to see his good buddy Stephen Harper.

The man he calls a "beacon" to the entire Conservative world.

And I told you how the bromance was so hot and heavy it almost set off the fire detectors at 24 Sussex drive.

Even after Abbott called Canada CANADIA... 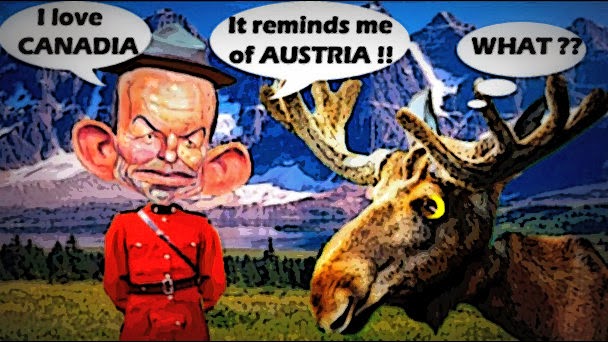 And especially when the two climate change deniers started gang banging the idea of a carbon tax.

Or pissing on Obama's plan to reduce carbon emissions.

With such commonalities, it was no surprise to hear a question on climate change came. What did both leaders think of US president Barack Obama’s new plans to reduce carbon emissions?

They were equally strident in their replies. Climate change is a “significant problem,” Abbott said, but it’s “not the only or even the most important” one the world faces. Harper delivered a fact check, as he saw it. Obama’s proposals “do not go nearly far enough in the electricity sector as the actions Canada has already taken.”

Which had them in such a passionate embrace I understand, that even Jason Kenney couldn't pull them apart.

So you can imagined how shocked I was to read how Abbott cruelly betrayed Steve when he visited the White House and tried to come on to Obama by claiming he was an ardent conservationist. 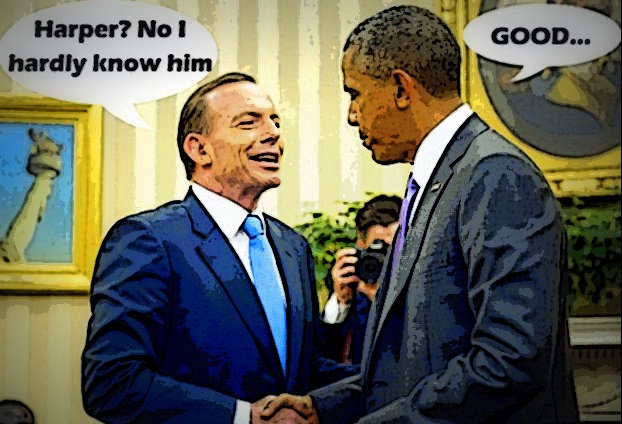 Prime Minister Tony Abbott has described himself as a ''conservationist'' who has no disagreement with US President Barack Obama on the subject of climate change.

Speaking after his meeting with Mr Obama in Washington, Mr Abbott played down any differences between the two leaders, saying that both he and the US President took climate change ''very seriously''.

Which made me wonder how Tony could do that to Steve? Doesn't he know he doesn't have any friends? And he REALLY hates Obama for humiliating him over and over again.

How sad and pathetic is this bromance? How faithful is Tony?

And why does he call Steve a BEACON ???

When as we all know the only beacon Harper has ever been called is a beacon of corruption. A flashing red blue light in the morally depraved pariah nation that is Harperland.

But then I read how a lot of Australians call Abbott Tony Dumb Dumb.

And then I saw this video and it all became clear...

Only a Con as ghastly and as dumb as Tony Abbott, could call Stephen Harper a beacon of ANYTHING.

And only a leader as small and as ghastly as Stephen Harper would take that as a compliment.

But yes, they are two monstrous climate change deniers.

And one can only hope that Lord Harper follows his heart.

If he can find it.

For they do deserve each other... 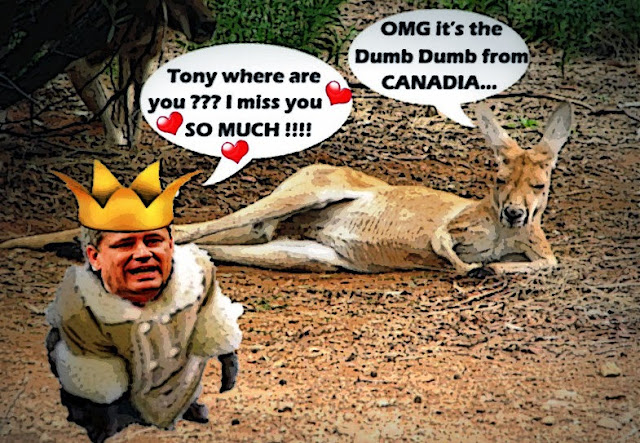 Abbott is infamous for this quote (or rather misquote): “No one, however smart, however well educated, however experienced, is the suppository of all wisdom".

To that I say: too bad the world has too many Supposi-Tories, eh?

Oh!
My!
Gawd!
What a complete moron abbott is! He makes george w. look like a rocket scientist! How the fuck did Asstraliana ever let a fucking neanderthal like him into office? It's no wonder he sucks up to harpie then turns right around and sucks up to O-bomb-a. He's too fucking stoopid to remember what he said to anybody. God help the real Australia!

Tony Abbott is a typical. politician. Sort of reminds you of the old line, if you can't be with the one you love, love the one you're with. Tony is just another old "whore". with apologies to any sex trade workers.

He won because he had Rupert on his side.

hi anon...yes that's in the video. I thought people were joking when they attributed that quote to him, but it's actually true. As I said in the post Abbott and Harper really do deserve each other...

hi anon...yes he is a total moron isn't he? And I must say now that I know that the poor Australians are saddled with someone like him, I feel a teeny bit better about our situation. But of course it does say something about the political culture of former British colonies. And it's not flattering...

hi Steve...OMG. I know the Aussies are descended from convicts, but pray for them anyway... ;)

hi e.a.f...I wish our Con media have given us a lit more background on Abbott when he was here, because if he's Lord Harp's best and only friend, it does say something about Great Leader. The day these Con dinosaurs are defeated will be a happy day indeed...

Oh, not Simon, Tony isn't Harpie's one and only friend, just check with the leadership in China, not to mention South Korea. And although Harpie carries on something "fierce" about Putin, they are truly "soul brothers". Just check their action when it comes to staying in power. Putin has his Ukraine moment and Harpie had his Iraq/Afghanistan decade.