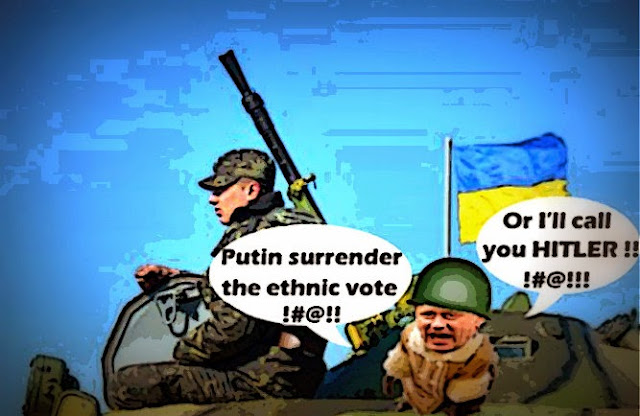 As I mentioned in my last post, Stephen Harper has been making a complete fool out of himself with his latest war of words with Vladimir Putin.

But at least he is getting some strong words of encouragement from his devoted friend Tony Abbott.

Prime Minister Tony Abbott has called Russia a "bully" and demanded it stops "interfering" in Ukraine. Mr Abbott's strongest comments on Russia to date came while he was in Ottawa, and followed Canadian prime minister Stephen Harper's criticisms of president Vladimir Putin.

Because as we know, Harper is no bully. He's a Great Warrior Leader. Even if his bluster doesn't pass muster.

A headline in the Globe and Mail proclaimed, “Harper ramps up Canada’s NATO forces to combat Putin’s ‘menace.’” That seems like pretty heady stuff until you read through the entire article to realize the actual announcement involved Canada sending 75 soldiers to attend the annual United States-led Saber Strike exercise in Poland.

Even if his flying "six pack" is more like a hot air balloon.

This is in addition to the six CF-18 fighter planes lovingly dubbed “Canada’s six-pack” by the tub-thumpers that were sent to Campia Turzii air base in Romania on April 29. Despite the muscular-sounding nickname, this handful of aging aircraft is deployed without munitions and with a mandate to conduct a training exercise with the Romanian air force. While it is true that they are now based closer to Russia than they were at CFB Bagotville, they are still nowhere close to the current crisis in eastern Ukraine.

And even if his navy is really only just gravy.

Likewise, the government’s claim that HMCS Regina has been deployed in response to Putin’s “menace” and “expansionism” also requires a little more media scrutiny. As a Halifax-class patrol frigate, Regina is primarily an anti-submarine vessel with a limited surface-to-air defence capability. It is presently sailing about in the eastern Mediterranean Sea, some 1,500 kilometres from the Crimean Peninsula, which is in the Black Sea. To claim that the 200-member ship’s company is bolstering NATO’s hand in the showdown with Putin is absurd.

But then why should we be surprised eh? When this whole hollow war on Russia is just an attempt to capture the ethnic vote in Canada.

And Lord Harp is just a chicken hawk.

The dumbing down of Canadian politics has surely hit rock bottom with Stephen Harper’s cynical exploitation of the tumultuous events in Ukraine.

It’s Steve Versus Communism; Steve standing tall against the Russian Menace. Steve sending war planes. Steve … the only member of the G-7 making a complete fool of himself over the whole sad mess.

With delusions of grandeur...

Harper’s pose is ludicrous. As Retired Gen. Lewis McKenzie told me, Canada will never deploy alone. Steve will not soon be commanding our troops to hurl the Russians out of Crimea. No, Harper is like the hockey fan banging on the glass yelling insults at the other team’s tough guy.

But then that's our Steve eh?

A Great Warrior Leader only in his own mind.

Shaming Canada in the eyes of the world.

And heading for embarrassment... 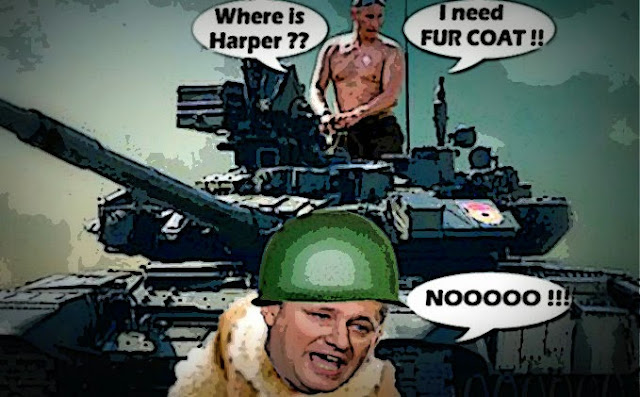 if harper is so keen on a fight he can challenge Putin to a fight. The two of them can have a boxing match, sort of like Trudeau and the con senator. they could sell tickets. It might even be a good fund raiser for Canadian Veterans. Its not like harper and his herd are keeping their end of the bargain, providing services for them.


Canada isn't going to war with anyone. We don't have the equipment. If harper sent jets to "fight" Russian jets, it would be over in a minute or less. Our pilots would be dead, the jets burnt, and Putin telling his jets to go into Ottawa and bomb the shit out of it. Obama would just put up his feet to watch the show.

Harper doesn't seem to understand if he keeps poking the eye of the Russian bear, it will take a swipe at him. Now Harper will make a run for safety, leaving Canadians to deal with the problems and deaths. We are not in a position to defend ourselves and the Americans may just decide to sit it out. Its not like they owe us anything these days.

hi e.a.f...as you know I have absolutely no time for Putin, but Harper's phony belligerence is so crass and irresponsible it's almost unbelievable. It's fine to stand up for the right of Ukrainians to determine their own fate, but pouring gasoline on a smouldering crisis is never a good idea...

hi fem progress...thanks for the link. I remember the story well, and I blogged about it at the time. And it remains the best example of the utter hypocrisy of the Cons. They are all for principle unless it affects their friends or their Big Business interests. I don't think it's possible to be more morally depraved, and not be in a prison...

I have no love for Putin, but I would PAY to see Putin pummel the crap out of Harper! That would be good entertainment value!

Harper is such an insignificant and delusional player on the worlds stage that he thought Obama would not be talking to Putin. Except he did, without telling poor Stevie. Looks good on you Harper. Your grandstanding rhetoric and outlandish tactics to secure the Ukrainian vote at home is the vilest partisan politics I've ever seen. I truly hope the Ukrainian Canadians see Harper for what he is. He cares only for their vote. What he and his other big mouth friend Baird did was stir up a hornets nest in the Ukraine and they continue to do so. There's blood on your hands Harper and Baird. A fitting ending would be to see you two on the Russian border with Ukraine, to see the results of your work, and hopefully experience it.