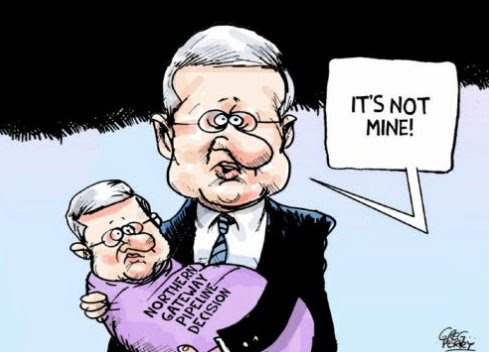 Well it's the talk of the town. The pundits are perplexed. Shock and confusion reigns.

Everybody is trying to figure out why Stephen Harper is disowning his tarry baby.

After working so hard to conceive it.

And in some parts of the country paranoia runs rampant.

I don’t have any inside information, but maybe, just maybe, Harper is prepared to write off a number of Conservative seats in B.C. in order to gain support across the rest of the country.

Just about every opinion poll taken these days in Canada puts jobs and economic security right at the top of issues people are concerned about. And, close reading of the polls showing opposition to the pipeline also reveal a significant portion of the people who are opposed are open to changing their minds.

The pipeline opponents are helping set up the wedge issue: Are you for jobs and economy? On one side will be Harper and the Conservatives, and on the other will be the Liberals, NDP and the Greens. Harper can win this one with under 40% of the popular vote when the other three parties are fighting over the remaining 60%.

And who can blame people for feeling that way eh? When paranoia in Harperland is just a higher state of consciousness.

Because he is crazy desperate, and he is capable of pitting the rest of the country against BC, even if that threatens the national unity of the country,

And he will do ANYTHING to satisfy his raging bitumen fever, even if it threatens the future of the planet. 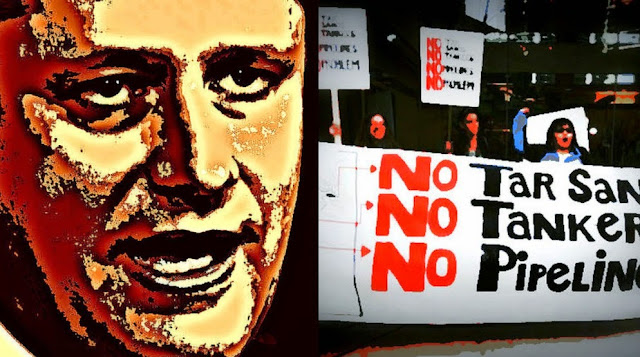 What Mr. Harper will do is promote by any and all means bitumen oil, and the pipelines to get it to markets, even though the growth in bitumen production is the driving reason why the Harper government (and therefore Canada) will fall miserably short of meeting its GHG-reduction targets.

But if he is planning to use the pipeline as a wedge issue, and is trying to distance himself from it to make it look like an economic decision, not a political one, it probably won't work.

In some respects, Northern Gateway is a classic wedge issue, as it very neatly divides public opinion into two camps: for and against. The wedge issue strategy would assume that opposition to the project would split between the NDP and Liberals, while pipeline supporters would rally to the Conservative Party of Canada. But there’s danger in that approach for the Tories. The assumption is that voters who support pipeline projects generally support Northern Gateway; similarly, those who are against Northern Gateway are against pipelines in general.

That simplistic view ignores some fundamental differences between this project and other pipeline projects, like TransCanada’s Keystone XL and Energy East or Kinder Morgan’s Trans Mountain.

Because even some of the dumbest and greediest Canadians can instinctively understand that wrecking the pristine environment of BC, to ship oil to China and make Alberta richer, probably isn't a good idea.

He'll never fool Canadians into thinking that the project isn't his tarry baby... 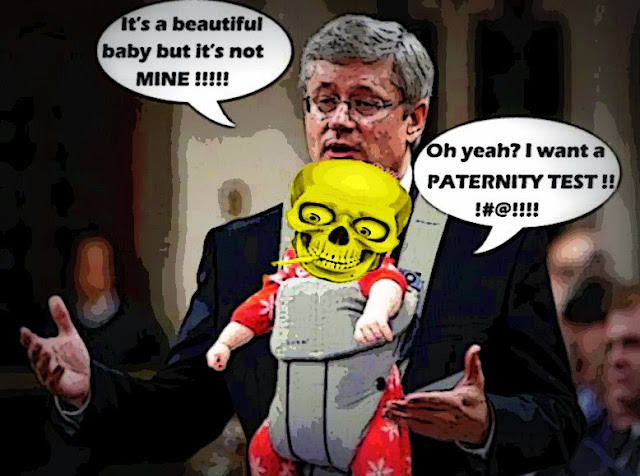 Trying to pretend it isn't, will only make him look like he's trying to hide something, and make most Canadians distrust him even more than they already do. If that's possible.

And if any trouble breaks out with the First Nations, Canadians will blame him, and his bitumen mania.

Because the truth is Harper is now so unpopular he can't count on getting support for ANYTHING he does. His credit is exhausted. Most people are sick and tired of him. And the writing is on the wall.

Or on this sign in someone's back yard in the Niagara region of Ontario... 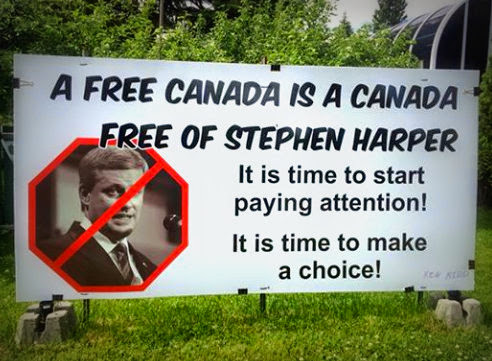 Which speaks to the anger of so many Canadians, who can't wait for the day when they can defeat him.

He's out of time. His great pipeline gambit, if it is one, will not work.

Only a miracle, or a bad mistake from his opponents can save him now.

And his day is almost over...

Love the sign..if I lived in an area (Vancouver Island) where anyone supported the Harper Cons on ANY level, I would probably pirate it for myself...but in my neck of the Canadian woods, we are staunchly NDP, with a sprinkling of Green...and have been for a long time..so all I can do is look to the Mainland and wonder why we have to put up with this insanity at all...

Simon you should watch today's Question Period. Normally an Oasis of Harper blow jobs But today aside from blowing Jason Kenny, and is that not every 50 year old bachelors dream? They eviscerated Harper even letting the Soviet Ambassador pile on.

Also Simon I have take a risk and made some video, I would really appreciate your constructive criticism. Is it to grotesque to be repeated?

People in B.C. may not be so enthralled with the Northern GateWay pipeline once the clearly understand they take all the risks but get none of the money. There aren't going to be "jobs, jobs, jobs" because once the terminal is built, its just load and go. A few longshoreman and that's it.. A few drinking palaces and "massage parlours" for foreign crew while the ships are being loaded, but that's it.

So while production goes up in B.C. the amount of money the province gets has fallen from $3.36 Billion to $508Million. Once that little bit of information develops some legs, people may begin to wonder if they will get any money from tar/bitamen.


there are no jobs coming from exporting bitamen through B.C. harbours, except for a few involved in loading the ships. If the shipping companies deem they need their own people, then they will bring in temporary foreign workers. They will bring them in under a category which relies on "technical experts". The new regulations the cons brought in, doesn't touch that one.

Building facilities to export the tar, those facilities will be built in Asia and floated here.

What Embridge wants is to get the right to run their pipeline through B.C.'s land. Much of that land is not owned by anyone but the people of B.C. and First Nations. Now Christy Clark maybe willing to turn over the land to Embridge, but what she gets out of it and what the rest of us in B.C. gets out of it, may be two different things. I figure I get to pay for the clean up of the spills and Christy, well she does have to come up with her kid's tutition at that fancy private school each yr. Yes, he goes to St. Georges, the elite private school for boys in B.C. And yes, our public school teachers are on strike because they can't teach 30 kids who speak minimal English, with 4 disabled kids and no teacher aides.

So Harper may want to put some distance between himself and the tar and things to come, but all the advertising in the world isn't going to put jobs, jobs, jobs on the market for all the unemployed in B.C. B.C. has the highest child poverty rate in Canada, with the second lowest min. wage. Harper can try, but don't expect he is going to do much. He has done what he said he'd do, green light Embridge's pipeline for China. Now he can step back and do nothing. The other pipelines, well Kinder Morgan would put the oil in the Vancouver harbour and trust me, all the Asians living in Greater Vancouver aren't going to be keen on having their high valued land become worthless. Hell they protest if there is a hospice built in their neighbourhood because it reduces their property values. Last week, two school board members voted against private washrooms in schools for transgendered kids. Why? Because Asian parents don't want it. Transgendered kids and their washrooms lower property values. Now lets have a look again at an oil spill in Vancouver Harbour.

This is our first time using this tool for a presentation. Let us know what you think about the presentation, as well as about the Enbridge approval decision, in the comments below.

Click here to read the voice-over script for the presentation:

EAF, your comments are amazing, I love the detail!

hi mizdarlin...yes it is quite the lawn sign isn't it? I too am lucky to live in a progressive bastion, but my friends and I will be spreading our signs around in less friendly ridings. It's so important to confront people with something visible whether it be signs or videos or blogs or whatever. Because that's one of the best ways to build a movement, and quite frankly I believe that with the world in the state it is, only a movement can save us...

hi Steve...I wasn't able to watch Question Period, occasionally I am forced to work for a living. ;)
But I did check out your video, and although I don't disagree with the general thrust of your argument, your presentation needs work. It's too long, it's not focused enough, and although you're a pretty good performer I'm not a fan of on-camera monologues. I just told some people in the Scottish independence movement the same thing, so don't be offended. Video is best used to appeal to emotion, it needs to grab the viewer right away, and it works best with images that can arouse those emotions. So I suggest you get hold of an editing program, if it doesn't come with your computer, and start making more elaborate videos. It really isn't that hard, and although it is time consuming, it can be a lot of fun...

hi e.a.f...I don't think that BC will eer go for a pipeline, although there are many in your province who do support it. I'm more worried about people in the rest of Canada who could be in favour, and could be influenced to support the Cons in the next election. As I said in my post I hope that will not happen, but we have become a greedy nation, so anything is possible....

thanks Simon if I continue I will do as you suggest.

thanks, deb scott. when you're retired you have a lot of time to read and write. Not much of this is researched by myself, but found on other blogs, such as Norm Farrell's, Northern Insight and others.