Gay People and their Straight Friends 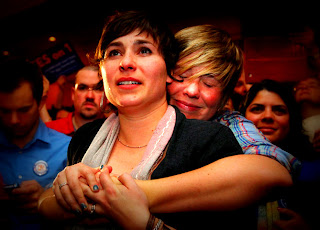 I've been so busy celebrating Obama's big victory, that I haven't been able to do this story justice.

For it too was an amazing victory, and a tribute to all those gay Americans who never gave up the struggle despite one bitter defeat after the other.

Never gave up spreading the word that marriage equality is a human right. 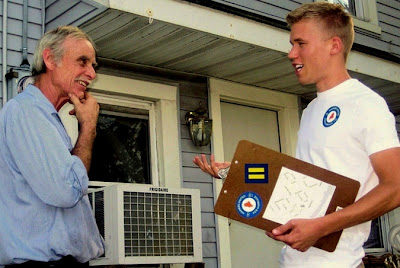 But as Dan Savage points out, they never could have done it without the help of their straight friends.

Now here's what I want to say: I know so many straight people in Seattle who worked unbelievably hard to approve R-74. They gave money, they volunteered their time, they reached out to friends and relatives and coworkers, all in an effort to make it possible for same-sex couples to marry. Gays and lesbians are a tiny percentage of the population. We couldn't do this on our own.

For who could ever thank them enough for such a magic night?

Or this scene at Marriage Equality headquarters in Maine, when the word finally came...

Oh boy. As LGBT people know so well, the harder the struggle, the sweeter the victory.

Hooray for the power of LOVE... 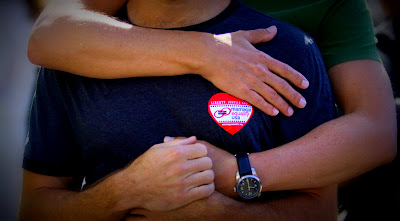 It really is amazing, isn't it, Simon, what can be accomplished when people put aside their differences and join in a common purpose for the betterment of all.

You like people for who they are, not what they are. I had a gay couple for neighbors. They couldn't have been nicer to me.

I had taken dinner and a cake over to them, when they were moving in. They were hesitant, apprehensive and asked me if, I knew they were gay? I told them, I had guessed that. I said, they would be my friends and neighbors, unless they proved otherwise. They were the best neighbors, I ever had.

Others in the hood, were very critical towards me. I told them the same. They will be my friends and neighbors, and that's the way it's going to stay. Only one house snubbed me in the end. That was fine with me. I hadn't liked them, from the first day I had met them. Many a time, I had to get a grip on my Irish temper. They were so much better than the rest of us. At least that's how they behaved.

Yeah. Just because we don't think you're cute doesn't mean we don't like you. ;-)

hi Lorne...yes you're right. It sounds so easy, but why is it so difficult?

hi Gloria...thanks for that sweet story. It's amazing how bigoted some people can be. I've never being felt that way about anyone, so I just can't understand it. Luckily I have great neighbours, except for the grumpy old guy down the street, who claims he can hear me playing my (accoustic) guitar
half a block away. But he's clearly a Con agent... ;)

Don't discount self-interest Simon. Like Trey Parker and Matt Stone once said: "I think we're all a little bit gay."

I learned a lot by interacting with gay discussion board members at rabble/babble and enmasse.

The world is changing for the better.