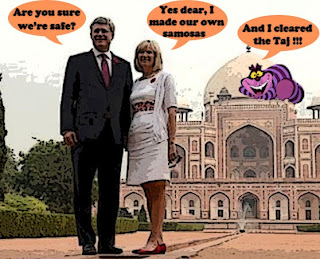 I must admit that when I first saw this picture of Stephen Harper and his wife strolling in the deserted grounds of the Taj Mahal, my heart almost skipped a beat.

Because I'm such a romantic eh?

Until I found out that thousands of tourists and others were chased out of the place by whistle blowing guards, for either posing a threat to his life, or threatening to ruin his perfect photo-op.

And that he is apparently so scared of the Indian people, he packed his own tank.

CBC News has confirmed that a C-17 military transport plane flew armoured vehicles to India for Prime Minister Stephen Harper five-day visit. The total cost per flying hour for a C-17 is $21,239. It is not known how many hours were required for the trip or how many stops were involved.

Stuck us with a bill of at least $500,000, and sent a clear message to his Indian hosts: We don't trust anything you make, especially armoured limos, so hurry up and sign a free trade deal, or you'll be sorry.

And forget about the curry place, it's not safe either.

He would have savoured spicy chicken curry and dal tadka with tandoori naans and rotis at a popular dhaba (roadside eatery) here but security concerns and “media leaks” have knocked this off the menu of Canadian Prime Minister Stephen Harper.

“The dhaba visit has unfortunately been cancelled. He being a G-20 leader, there were a lot of security issues involved. It’s not happening now,” Shiv Raj who works in Harper’s office and is here as part of the advance party, said.

So we're bringing our own samosas... 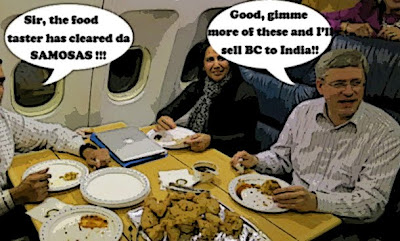 Gawd. Can you believe Great Chicken Leader's monstrous appetite? Is there ANYTHING he won't eat for a vote? And can you believe the depth of his paranoia? So soon after he had the poor kiddies frisked at his Halloween photo-op.

Trick-or-treating children visiting the prime minister's residence at 24 Sussex Drive this year for the first time had to pass through metal detectors and leave props such as plastic swords on a table at the end of the driveway.

And does anybody really believe that the RCMP is calling the shots? When it's in a shambles, Vic Toews is running it, Stephen Harper wants to look like a President, and the Cons are trying to turn this country into a police state?

Just when you thought it was safe to venture out on the Internet, along come the government snoops and their shiny new toy, Bill C-12...The putative aim of C-12, with the comic-ironic “short title” of “Safeguarding Canadians’ Personal Information Act,” is to improve online privacy and protect personal information. In many circumstances, it will do just the opposite.

Yup. Controlling the population, controlling the photo-op, in the control freak's hall of mirrors, in the grubby darkness of Harperland. Where everything is fake, or staged, and the truth is what they say it is.

You know, I realize we live in crazy times. But I've seen Harper's motorcade screaming through the streets of Toronto, and it was bigger and more menacing than even Obama's scary caravan.

And it just reinforces my feeling that something is terribly wrong in this country.

I suppose I should enjoy the obvious irony, that a man who uses fear as a weapon should live in fear himself. But I don't.

And give me back my bright Canada... 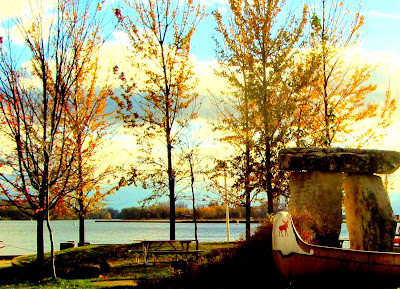 It goes without saying that to balance the budget by 2015, a few more thousand civil servants will walk the unemployment line as opposed to limiting or canceling travel for preznit harper. His inflated sense of self is so appalling and a direct result of being around too long. Flying vehicles overseas for a trip is so ridiculous that any rational Canadian ought to be outraged. Too bad those puff ads are working so well to keep the electorate focused on his job creation plan. Opposition, where art though? harper needs to wear this trip around his neck for a long time to come.

I wonder how many world leaders snicker behind his back. The man is delusional.

All dictators through the years were paranoid. Stalin, Hitler and Mussolini were so despised, they went to great lengths with their paranoia, and even murdered their own relatives. They murdered everyone they thought was against them. Millions died because of their paranoia. Uncle Joe Stalin murdered millions of his own people. That's how paranoid he was.

Harper is very aware, other country's don't like him, what-so-ever. At every meetings of Nations, Harper always manages to anger and insult every country attending. Country's know, it was another P.M. who saved our Canadian bacon in this recession. Harper has made a lot of enemies, especially over Communist China. Harper knows millions of his own citizens despise him.

Harper's paranoia is so bad now. We thought a whopping $47 million was far too much. Harper has had to step up his security, into the millions. Harper's ugly personality, is costing us millions, and we don't even want him.