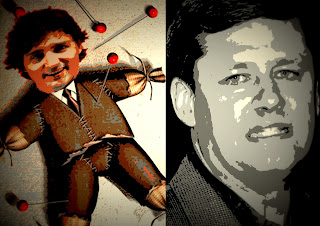 Golly. It must be a case of reverse voodoo eh?

Another Reformer, former MP Stephen Harper, said other parties have played along for 30 years that it’s better to have a leader from a certain region. He cited former prime ministers Pierre Trudeau and Brian Mulroney, as well as Chretien and Charest, who were going to reconcile Quebec to the rest of Canada. ”It’s fairly obvious that this hasn’t solved the problem, so it’s not surprising that someone should make the opposite case that we need a leader from somewhere else,” said Harper, now with the right-wing National Citizens Coalition.

Or looks like an idiot, or a hypocrite. Or a dangerous Alberta separatist.

"I too am one of these angry westerners. The Liberals demonized the West and Alberta in particular ... we may love Canada, but Canada does not love us ... let's make the province strong enough that the rest of the country is afraid to threaten us." Dec. 18, 2000

As his ugly past is slowly dredged up from the bottom of the Black Lagoon, or the Tar Sands, to come back to haunt him... 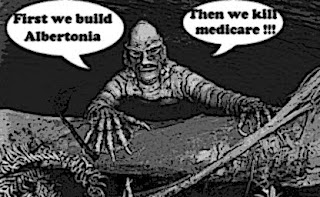 And of course this must absolutely KILL him.

First, let’s restate the obvious: Alberta is not, in and of itself, a must-have for the Grits. Polls have consistently shown that Trudeau’s support West of the Ottawa River will come primarily from Ontario and British Columbia. In the context of the next federal election, these two provinces are two-tonne gorillas: Ontario will hold 121 seats in the 2015 election, British Columbia 42. The Maritime provinces, where Trudeau is strongest, will hold 32 seats between them. Alberta, by contrast, will hold just 34 seats, Saskatchewan and Manitoba 14 apiece.

Third, and most important, is the elephant in the room: Quebec and its 75 seats, soon to become 78.The simple reality is that the massive attention paid to Trudeau’s remarks two years ago, lamentable though they are, has probably broadened his coattails in Quebec.

For as I've pointed out many times, if we can get the Maritime provinces, Quebec, Ontario and British Columbia to gang up on the Alberta Cons, for killing our jobs and our country, we will do to them what the Argos did to the Stampeders.

Whose dejected fans were last seen heading for Calgary, mumbling something about those "Eastern bastards" and no doubt blaming the National Energy Program for their humiliating defeat. Don't they always?

Muahahahaha. Suck it up rednecks.

Although to be fair eh? They were not humiliated as much as Stephen Harper was this weekend, when in another crass photo opportunity he awarded one of his jingly Jubilee medals to Justin Bieber. For his outstanding contribution to Canadian culture.

In August, Bieber reportedly told Rolling Stone he was “part Indian. I think Inuit or something? I’m enough per cent that in Canada I can get free gas.”

Only to be first ignored, and then publicly humiliated by the Bieber.

And since he has more than 30-million Twitter followers, I think it's fair to say that they were laughing at Stephen Harper all over the world. LOL.

And who can blame them eh? For never has a Canadian Prime Minister looked so ridiculous, or so nerdly DESPERATE.

Gawd. I can just see it eh? Tonight Great Macaca Leader is probably sitting in his dark basement practicing his new song... Baby. Or sticking pins into himself to see if it makes him as popular as the other Justin.

Soon he'll be begging for votes.

The more we degrade them, the easier it will be to give them the hook.

And send them all back to Alberta....

…the tragic dis­appearance of Harper’s grandfather, Harris Harper, in Moncton, New Brunswick, in 1950. Harris Harper, a high school principal, was, like his grandson, of a gloomy disposition. His failure to return from a doctor’s appoint­ment led many to believe at the time that he had thrown himself from a bridge and into the Petitcodiac river, committing suicide. Harris Harper’s body was never found.


There was a scandal surrounding Harper’s grandfather. Rumours said he ran off with a woman, but I always thought there was more to that story. Joe used to tell his co-workers that Stevie was difficult to handle and often sought their advice according to the author of The Pilgramage of Steve Harper.

It seems to me. Alberta is the only province, that is considered the west. The West and Alberta are usually in the same sentence. BC, Saskatchewan and Manitoba are always mentioned by name.

BC is no where near Conservative. Harper's best buddy Gordon Campbell, also gave BC's resources to China. Campbell's only requirement for China, to take the BC mining jobs was. China must send their people to school, to learn 100 words of English, so they could take the BC mining jobs. Campbell also shipped BC mills to China, along with their raw logs. This put hundreds of BC mill people, right out of jobs. While in that deep recession. Campbell and Harper forced the HST onto BC citizens as well. Campbell and Harper did a lot of dirt to the BC people. Campbell forgot to say. He works for Harper and, not for BC nor the people.

Have people forgotten? Harper rewarded Campbell, the High Commissioner to England post, for doing Harper's dirty work for him.

Don't worry about BC Simon. We have very long memories. Campbell's two election lies, we will never forget. Campbell said. The BCR wasn't for sale. The HST wasn't on his radar. We still want Gordon Campbell in prison for, his lies, deceit, thieving, and corruptly selling our BC heritage, our BC Railroad.

Harperland's goal is to destroy Canada as a progressive liberal-democracy and replace it with essentially a neo-con petro state based on Straussian principles of governance. That is, 'smaller government' (cuts) for social safety nets and business regulation, but more spending for the military, on authoritarian control of citizens, and funneling of taxpayer money into pockets of big business. And also with a with a hard dose of that "Upper Canadian Tory traditionalism" that Tom Flanagan wrote a lot about. Incidentally bringing back 'Royal' and the 'War of 1812' infatuation (and waste of money) is all consistent with Harper's strategy of positioning the Conservatives as THE party of Canada while at the same time intentionally humiliating Quebec. In other words, Harper is trying to enhance his own position by association. And these morons have the gall to dredge up musings by Trudeau from 2 years ago, when their polices are internationally designed to humiliated Quebec and divide Canada?

Hear Hear!! Very well said indeed!! Yes, if he's counting on (fed) BCCons to vote for him..... well I hope he holds his breath!!

I suggest anyone not aware of the Straussian principles of governance to look it up! Google is your friend LOL and it doesn't take but 2 minutes to get the general gist of the principles that harpo follows.
The more you know about who/what you are fighting, the better ammunition you have.... remember that!

Quebers should humilated, at all times and in all things. We want them to leave, go just go.

Hey Anonymous 12:56: I can always tell it's "you" (the same person) by your overuse of commas. Makes reading very difficult.