Robocalls: Is the Con Story Crumbling? 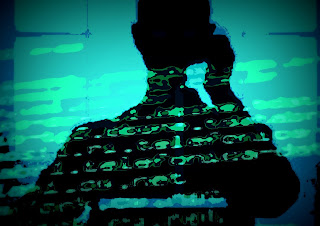 Ever since the robocall scandal began the Cons have always claimed that if there was a "problem" it was a small one.

It was limited to the Guelph area, the work of a rogue operative or operatives, and that people only complained AFTER the election was over.

Because you know the Lieberals made them do it eh?

But unfortunately for the Cons, we now know that's not true. The complaints started flooding in BEFORE the election.

Elections Canada officials scrambled to correct apparent misinformation going to voters through robocalls in the three days leading up to the May 2, 2011, federal election, newly released emails show.

They were coming in from all over the country, the Cons knew that because Elections Canada contacted them.

Within half an hour of hearing about the complaints, a lawyer for Elections Canada sent an email to a lawyer at Cassels Brock in Toronto who represented the Conservative Party. The name is blacked out in the documents released by the election agency, but party lawyer Arthur Hamilton works at Cassels Brock.

When Elections Canada called some of the numbers outraged voters had complained about, a funny thing happened.

"When these numbers are called, the voice message is recorded by the same person even though the numbers are different," Anita Hawdur, the election official in charge of the voting process wrote in an email to one of Election Canada's lawyers.

And let's not forget all those other online complaints

Online complaints posted during the last federal election campaign show that voters were getting incorrect poll-moving calls from the same numbers that sent Elections Canada workers scrambling in the final days before the 2011 election.

Which had the opposition in the House of Commons today accusing the government of voter suppression:

Lawrence Martin wondering whether the Con narrative is crumbling.

Though nothing is conclusive, the revelations, which directly challenge the Conservatives’ version of events, can hardly be of comfort to Stephen Harper’s team. The story has become a whodunit with phenomenally high stakes. No democratic government found to have run a widespread vote-rigging operation is likely to survive.

And offering up this theory:

Anyone wishing to play devil’s advocate could try this theory: The Conservatives, no strangers to questionable political tactics (remember the in-and-out affair?) were aware that in every election there are late changes in polling station locations. They decided they could use this as a cover for a calling operation. If suspicions arose, they could say they were just phoning to get their supporters out and maybe a few mistakes were made along the way.

And the Council of Canadians setting up a hotline to report voter fraud. 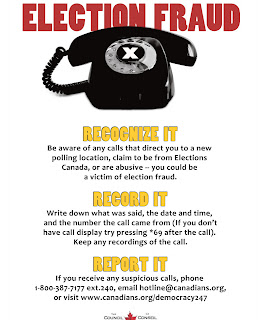 All of which leaves me with just two questions eh?

Does Elections Canada have the resources to investigate this massive scandal? And if they don't will they please call in the police? NOW.

For no democracy can survive under this kind of cloud.

And if the Cons tried to steal an election.

They must pay a terrible price ...

The 2011 Conservative Guelph campaign director has moved to Kuwait (no extradition treaty), and a 2011 Conservative consultant, who owned the laptop tied to the Internet address of 'Pierre Poutine', is not talking. And these guys are just the tip of what could turn out to be a very large iceberg.

It will be interesting to see how this all plays out.

I am just waiting for the day someone kicks Connie rat Pierre Poilivere right in the NUTS over this. He's been lying about this in the HoC for months on end, standing there with an arrogant little smirk on his conniving face. The whole damn Con cult of thugs govt is illegitimate. Recall the whole thieving, lying lot of them.

Press conference tomorrow at 9:00 with 2 of the individuals on the court challenge of the elections results with Council of Canadians. Tune in!

any one who is surprized by this obviously didn't look at harper & his cabal closely enough. They are so arrogant they didn't expect to be caught. Now that they have they will simply brazen it out.

Treason Stephen first stole the election & now he is selling Canada to China. The sooner he goes the better, while we still have some semblance of a democracy & still own our own country.