Gaza:The Horror and the Hypocrisy 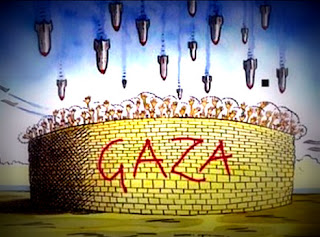 It couldn't be more horrible. Or more familiar.

Bombs raining down again on a tiny enclave where more than half of its residents are children.

The Hamas fanatics playing into the hands of the fanatical Netanyahu regime, by firing off rockets, with or without warheads.

The Netanyahu regime with its "surgical strikes," claiming the lives of more innocent victims. 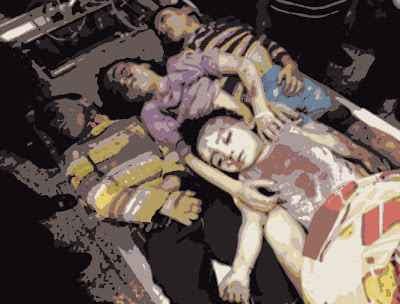 And playing into the hands of the Hamas fanatics.

“Today we raise our hats to Hamas,” said Talal Okal, a Gaza political analyst normally critical of the movement. “They look organized, aware of what they’re doing and ready to pay the price to achieve their agenda. Ordinary people can only admire them today.”

Who are only encouraging the right-wing maniacs in Israel.

We need to flatten entire neighborhoods in Gaza. Flatten all of Gaza. The Americans didn’t stop with Hiroshima – the Japanese weren’t surrendering fast enough, so they hit Nagasaki, too.

"The goal of the operation is to send Gaza back to the Middle Ages. Only then will Israel be calm for forty years."

And everywhere in the MSM the stench of hypocrisy.

And we journos are writing like performing bears, repeating all the clichés we’ve used for the past 40 years. The killing of Mr Jabari was a “targeted attack”, it was a “surgical air strike” – like the Israeli “surgical air strikes” which killed almost 17,000 civilians in Lebanon in 1982, the 1,200 Lebanese, most of them civilians, in 2006, or the 1,300 Palestinians, most of them civilians, in Gaza in 2008-9, or the pregnant woman and the baby who were killed by the “surgical air strikes” in Gaza last week – and the 11 civilians killed in one Gaza house yesterday. At least Hamas, with their Godzilla rockets, don’t claim anything “surgical” about them. They are meant to murder Israelis – any Israelis, man woman or child.

As, in truth, are the Israeli attacks on Gaza. But don’t say that or you’ll be an anti-Semitic Nazi; almost as evil, wicked, unspeakable, devilish and murderous as the Hamas movement with which – again, please don’t mention this – Israel happily negotiated in the Eighties when they encouraged this bunch of mobsters to take power in Gaza and thus decapitate the exiled super-terrorist Arafat. The new exchange rate in Gaza for Palestinian and Israeli deaths has reached 16:1. It will rise, of course. The exchange rate in 2008-9 was 100:1.

And what more can you say eh? Except to be silent is to be complicit.

Or just a coward.

Stop the rockets and the bombs. End the madness.

Save the innocent children... 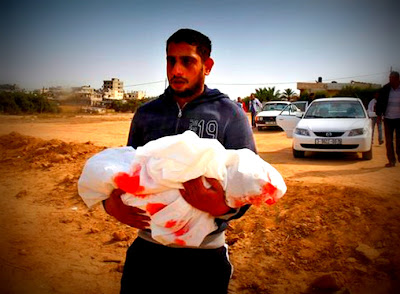 Your beloved NDP doesn't have a problem with it. Look at Muclair's own statements!

hi anonymous... unlike you Cons who faithfully follow Great Leader like a sunflower follows the sun, I march to the sound of my own drum. I don't care what any leader says. Israel has the right to defend itself, but not slaughter innocents. The Palestinians have the right to resist occupation, but firing off rockets indiscriminately is not the way. We need a ceasefire, we need serious talks, we need a Palestinian state, we need reconciliation, we need peace everlasting...

Take away their foreign funding and see how tough these Israeli bullies are.

Yes, Israel does have a right to defend itself, but Israel vs Gaza is akin to David vs Goliath. When the leaders of the 'free' world all stand together and take Israel's side, it gives them carte blanche to commit war crimes and atrocities, with no accountability.
I'm NDP, but after Mulcair's statements, am thinking of tearing up my card.

A voting for who? The Liberals feel the same way.......haha poor progressives you just can't win.

"we need a Palestinian state" The hell we do! And who is going to provide land for that?

"we need reconciliation". Clearly you have no idea how deep the hate goes on both sides.

"we need peace everlasting..." Yup? And who's peace might that be? Hamas? Israel? Peace means different things to different people.

hi anonymous...what do you think this conflict is, some kind of game? Why should I pick sides when I'm criticizing both of them, and all I want is for the two sides to stop the killing, and learn to live in peace together. The land for a Palestinian state is still there, even though Israel is chipping away at it bit by bit. I am also aware of how deep the hatred goes, but if the two sides in Northern Ireland could be reconciled so can the two sides in the Middle East. And you're wrong, peace means the same in every language on earth...

hi Way Way Up...I wish it was that easy, and bullies is a good word. But unfortunately Israel makes and sells enough weapons to keep it's Death Machine going. Besides what I really want is for all the countries in the world to put pressure on both sides so we can finally arrive at a diplomatic solution. Spare Palestinians as well as Israelis from this horror, and spare us from having to watch this bloody nightmare go on and on and on...

hi Wendy...I agree with you completely, and I hope I didn't inadvertently suggest otherwise. I may criticize both sides for this latest eruption, but Israel must get the greatest share of the blame, because it's a major military power, it is a David vs Goliath situation, and the Netanyahu regime's disproportionate response is a humanitarian outrage. As for Mulcair, I must admit that on foreign policy I'm also extremely disappointed. As Fisk points out in his column, for some reason this conflict has a habit of turning otherwise decent people into cowards and hypocrites...

hi anonymous...at least progressives care about principle and humanity. Nobody has ever accused the Cons of that, and it's not something you should brag about...

You actually believe peace means the same to everyone? Oh my God, what kind of John Lennon la la land do you live in. Peace will come when one sides wins over the other. Simple as that. Israel, for now, holds the high ground and good on them.

The British won in Northern Ireland. They IRA disbanded, the British Army and RUC did not. The IRA gave-up their weapons, the British did not. And most importantly North Ireland is still part of the UK. The IRA failed in its mission, they sued for peace. All conflicts have winners and loser.

Progressive have principles? Aren't we being the judgemental one now. Don't harsh my buzz with your morals Mr. Bring-down. ha ha

The solution to the war between these two groups could have been achieved back when the state of Israel was formed. Unfortunately it wasn't. The Arabs have a right to their land & their lives. Israel has the right to exist. What I have always wondered about is how the refugee problem has gone on so long. When Arabs left the area or were forced to leave the other Arab countries never did welcome them. They were left in refugee camps which became Gaza, etc. None of this was good for the Palestinians or the Israelis.

Israel isn't that interested in what they do to other countries because they know other countries have never been interested in the civil rights of Jews. They remember what happened to the Jews in Germany. Those Jews who attempted to flee to England, Canada, & the U.S.A. were in for a big surprise. They weren't wanted. England made it almost impossible for European Jews to enter the country. Canada turned a ship away, with the result these people went to death camps. Nothing has changed in this world regarding the attitude towards the Jews. The sad thing is the country which was established to ensure Jews had a nation of their own are doing to Arabs that which was done to them at one time. Of course with having major Arab countries sitting close by, who do not wish Israel well, they do remain nervous & will strike back with max. force.

Israel is a major weapons manufacturer & exporter. With the ready market for weapons, I don't see the state of Israel becoming poor all of a sudden. Countries which support Hamas & encourage their rockets into Israel are not doing the people living in Gaza any favours. They are only furthering their own interests.

hi e.a.f...the story of how we got to where we are today is a truly tragic one. So much violence, so many missed opportunities. And like a lot of people the situation seems so hopeless I sometimes feel like trying to ignore the story altogether, if that's possible. But so many are suffering, it's driving people on both sides crazy, and until this gaping wound is healed the horror will go on and on...

If killing civilians like killing children and babies is terrorist, then Israel is terrorist:
http://media-islam.or.id/2012/11/20/anak-anak-korban-kebiadaban-tentara-israel/
http://kabarislam.wordpress.com/2012/11/30/foto-hujan-bom-di-kota-gaza-palestina/

Peace means everyone does all he can to progress his situation without harming others. Peace means concentrating on building and not destroying. enhancing education and not educating to harm others. Look what Gaza achieved in the past 50 years? NOTHING ! All that waist in destruction and hate. Gaza strip belonged to Egypt and I don't remember the Palestinians uprising against them because if they did they would have been demolished and nobody would have known about it, like king Husain did in Jordan. Because Israel is a democratic nation and let the Palestinians the freedom of speech they can do what they do? NO. concentrate on building and progressing the people and you will see how Israel will lend you a hand. You know, try for a while another approach. The current one is not working for you.