Stephen Harper and the Two Justins 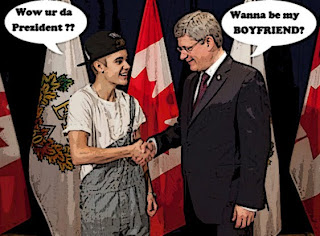 OMG. Or should that be Baby Baby? What are Stephen Harper and his absurd Cons doing to our country?

For there was Great Musical Leader today, too busy to meet with the premiers, but not too busy to hand out royal bling to Justin Bieber.

While in the House of Commons the Con chorus wailed pathetically: The other Justin is bullying Alberta !!!!! WAAAAAAAH !!!!!!!!

Alberta MP Michelle Rempel called the remarks "insulting," while Immigration Minister Jason Kenney, who represents a Calgary riding, said Trudeau's words were indicative of "the worst kind of divisiveness, the worst kind of arrogance of the Liberal Party."

The day after the Cons killed a bill to protect bullied children.

Can you believe that eh? What ghastly hypocrites, what cowardly scum.

And can you believe the sight of so many in the MSM,  wringing their hands over whether this might mean...wait for it...that the gnarly old Con Joan Crockatt could win a bye-election?

In the one party state of Alberta?

Where only Cons and crockatts roam... 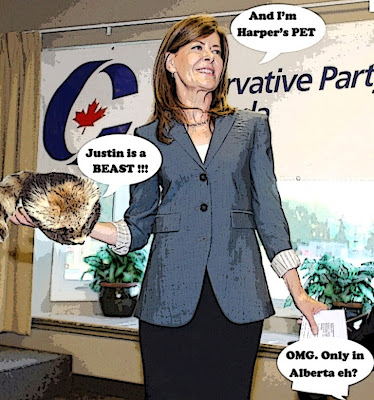 When in fact her election would only prove that the redneck province that always leans the same way like the Tower of Pisa Pizza, or Kazakhstan, can't be taken seriously.

And that after forty years of badmouthing the "Eastern bastards" or bashing Quebec like toothless teabaggers, or killing jobs all over the country, most Canadians care about its bruised feelings as much as I do.

Insulting Alberta can only make Justin even MORE popular in the rest of Canada. And the only reason the Cons are attacking him is because they are so afraid of him they're shitting their cowboy diapers.

Conservatives have launched their first concerted attack on Justin Trudeau — and a new poll may explain why. Forty-two per cent of respondents said they’d be certain or likely to vote Liberal in the next election if Trudeau was at the helm — enough to form a comfortable Liberal majority government.

And nobody, but NOBODY, is soiling himself more than Great Ugly Leader who has made it his Life Mission to destroy the Liberal Party.

For he must now fear that of the two paragraphs Canadian history books will give his sordid reign, the second one might now read:

On the positive side, before his sinister jackass regime was defeated and jailed, he did perform a political miracle, worthy of Lord Jeebus himself. Raising the Liberal Party from the dead. And bringing another Trudeau to power.

Gawd. How that must HURT... 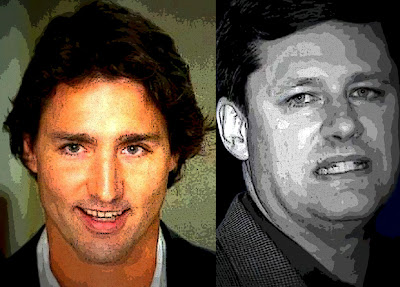 And what must scare him the most is the horrible possibility that he won't be able to do ANYTHING about it. The possibility that Justin Trudeau just might represent an enormous desire for change, a craving for something new and different and brighter, after the grey and grubby Con years.

A mighty generational wave that will sweep across the country and cannot be stopped.

Trudeau’s appeal was consistent across urban and rural areas and among voters of all age groups.

No matter what Harper, or even Justin says.

As for me I have no idea what the future holds. And I'm still betting on an NDP or coalition government.

But as Justin's old man once famously said, right now the universe is unfolding as it should. Canada is still a progressive country.

The tyrant is quaking in his boots. The Cons are desperate.

The redneck crockatt is snapping. #!@#!!

And of course, I'm laughing my ass off eh?

In question period yesterday some RoboCON actually dredged up the Trudeau era from the 1970's as proof that Justin T hates Alberta and will destroy it's economy. They must be worried. The RoboCON couldn't even read the words properly, he was so outraged. Hahahahahahahahahahahahaha! What a joke these guys are.

"And I'm still betting on an NDP or coalition government."

I don't think that's the way it will go. It's going to be Justin Trudeau all the way. But thanks for playing.

I was so furious Justin Trudeau apologized, to that scum of a tyrant Harper. I e-mailed him and told him so. I asked if he didn't remember, Harper and his ranting raving henchmen calling Canadians, pornographers, terrorists, and the Taliban. Harper himself alluded the NDP as Nazi's. Where are those s.o.b's apologies? I told Justin to recind his apology. Harper and his henchmen, deserve no apology, what-so-ever.

McGuinty should have kicked the Tory's @$$, to hurry them on their way back to Alberta. Why should have McGuinty resigned? Harper's favorite henchmen Gordon Campbell, has the dirtiest and most foul political record in history. He was also a drunk. So drunk he drove on the wrong side of the road. There is Boessenkool the drunk groper. There is Bruce Carson, who was arrested for influence peddling. There were two Americans, that directly participated in 14 Conservative campaigns. Harper cheated to win the election. Harper is selling Canada out to Red China. And, they apologize to those monsters? What in the hell for? For destroying our country?

YOU DO NOT EVER APOLOGIZE, TO HARPER AND HIS SO CALLED CONSERVATIVES. Not one of them, deserves an apology.

Shame on both, McGuinty and Justin for apologizing to that, utter scum of the earth. They only said, what we all want to say.

hi Sue...yes they are a joke aren't they? Or just desperate. You think they'd know better considering all the things we can and will dredge up about them. As I said in my post I'm not sure how things will finally shakedown, but I can't help feel that the day of the Con is drawing to a close. Finally...

hi anonymous...my position is this: at this point I don't care who beats the Cons, as long as somebody does. I've seen posts on Progressive Bloggers suggesting that approach is not right, and I realize that party platforms do count. But if the Cons win again Canada will be lost, so I'm sticking to my guns. Now is not the time to debate how many angels fit on the head of a pin, now is the time to destroy the Harperite scum...

hi anonymous...to be fair Justin didn't apologize to Harper, just to the people of Alberta. I don't think he had to apologize to anyone, but at least he did point the finger at Great Ugly Leader, and that's who I intend to keep picking on.... ;)

Simon,
Why would he apologize to a bunch of people who wouldn't vote Liberal if their lives were being threatened? Obama is and has been making the same mistake with the rethuglicans and their anthropomorphic supporters and all he's gotten so far are more death threats than any preznit I can ever remember. If Justin is gonna be a Liberal, let him grow a pair so as to ignite the fire under the people in Canada who are sick to death of this political bullshit a.k.a. "business as usual". As your pal Thwap might say, "fuck them and the horses they rode in on!". H.T. to Thwap and his schoolyard.